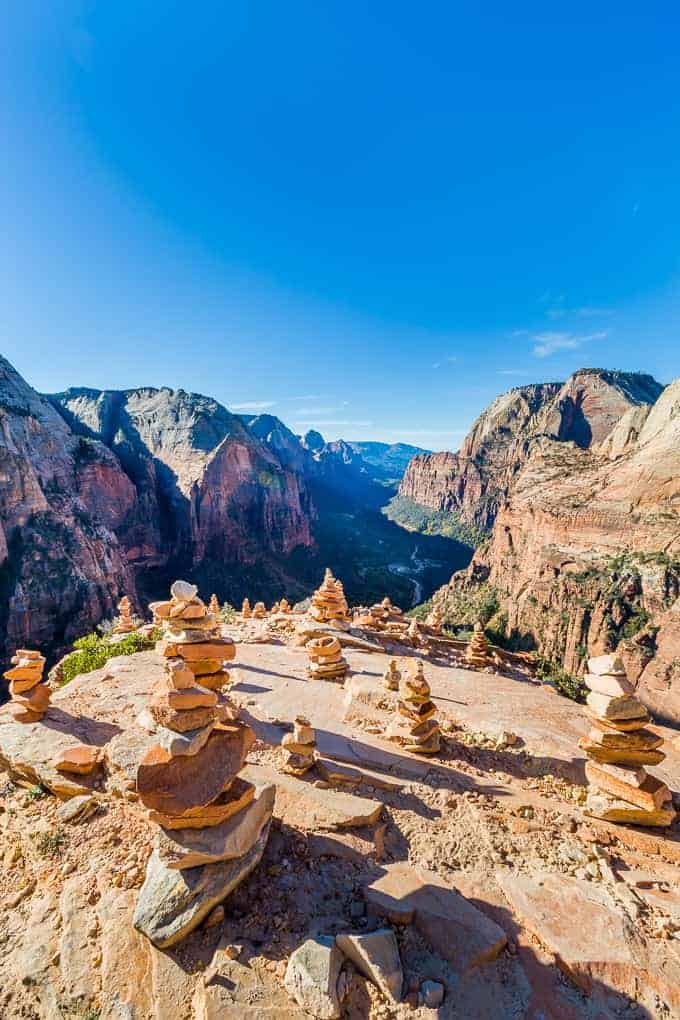 Angels Landing is a heart stopper for some, and a crazy good adventure for others. My goal today is to help you decided which one you are before you embark on this hike! I just want to say right off that doing this hike as well as any kind of outdoor activity is always undertaken at your own risk. I don’t mean to sound ominous or anything, but it is important to be prepared so that you can be as safe as possible. This hike is strenuous as well as very exposed, and there have been a handful of people that have fallen to their death, so it’s not to be entered into lightly.

We saw a lot of people totally out of their element on this hike, and even had a bit of an encounter with one woman. This hike starts off deceptively easy, but the last 1/2 mile works it’s way out onto a very narrow ridge with sections of chain most of the way. On the other side of the chains are fatal drop offs, so there really isn’t any margin for error so to speak. They say that this hike got it’s name because it used to be said that this ridge was so narrow ‘that only and angel could land on it’. 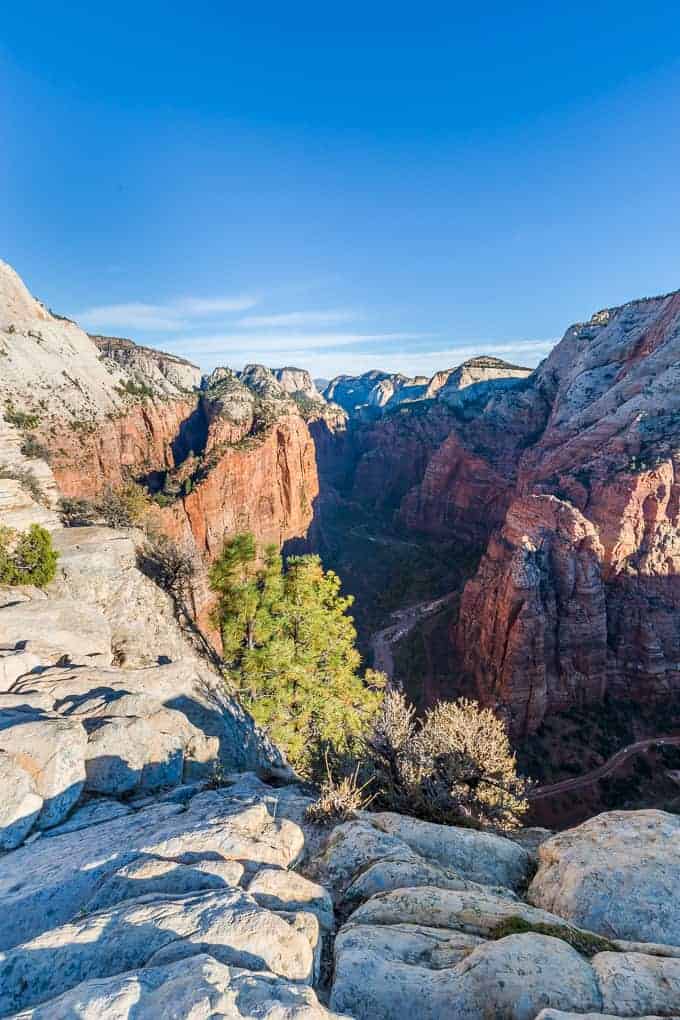 I feel like I might be being overly dramatic to some, but the difficulty of this hike will depend almost entirely on you, and how comfortable you are with heights. If you know you have a problem with heights, I can guarantee you’re not going to enjoy this. If even the thought of looking to your right and seeing a 1,000 foot drop makes your heart go pitter patter, there are so many other amazing hikes you can do in Zion besides Angels Landing.

I’m including a link to a short video I posted on Facebook of the step of faith where you step up onto a narrow section of rock with a 1,000 foot drop on either side of you. I’d definitely encourage you to watch it before deciding if this is a good hike for you or not. Also a good sign that this might not be a good idea, is if you get to the chain section and you feel nervous right away. That’s the perfect time to turn around because it only gets harder from there! You can also check out Joe’s Guide to Zion – I linked directly to his pictures of what the trail looks like with a good look at the exposure. 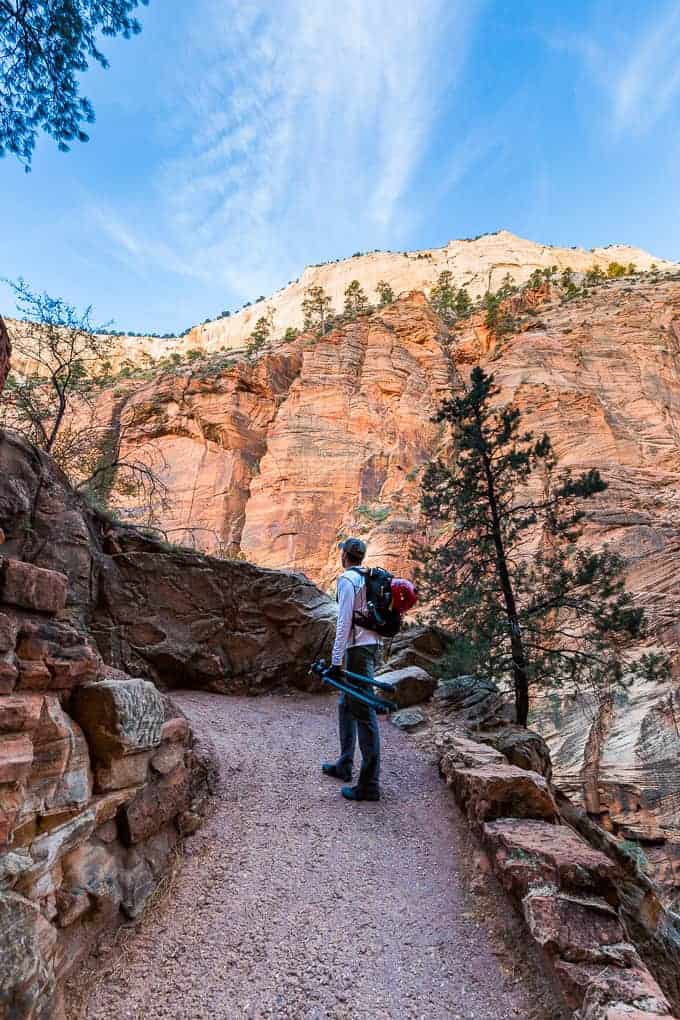 There’s a lot of hype about this hike, and it definitely measures up. The views are phenomenal and the hike itself was a ton of fun. That being said, if you’re used to mountain scrambling, go early if you want to have a good time. Once the crowds of people start showing up, the fun pretty much stops because you’re going to come across a lot of people that are so scared out of their minds that they make it dangerous for other people around them. 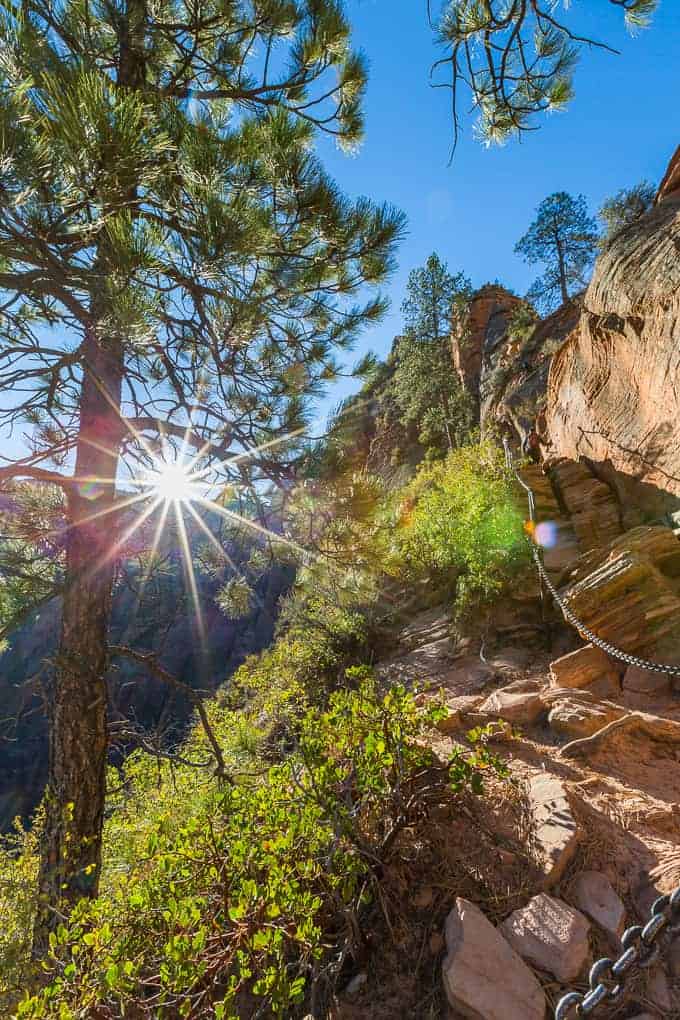 We started hiking well before sunrise to get an early start, and the cool air and complete lack of crowds was great. About halfway up the chained section the sun started to rise and the views became even more breathtaking. 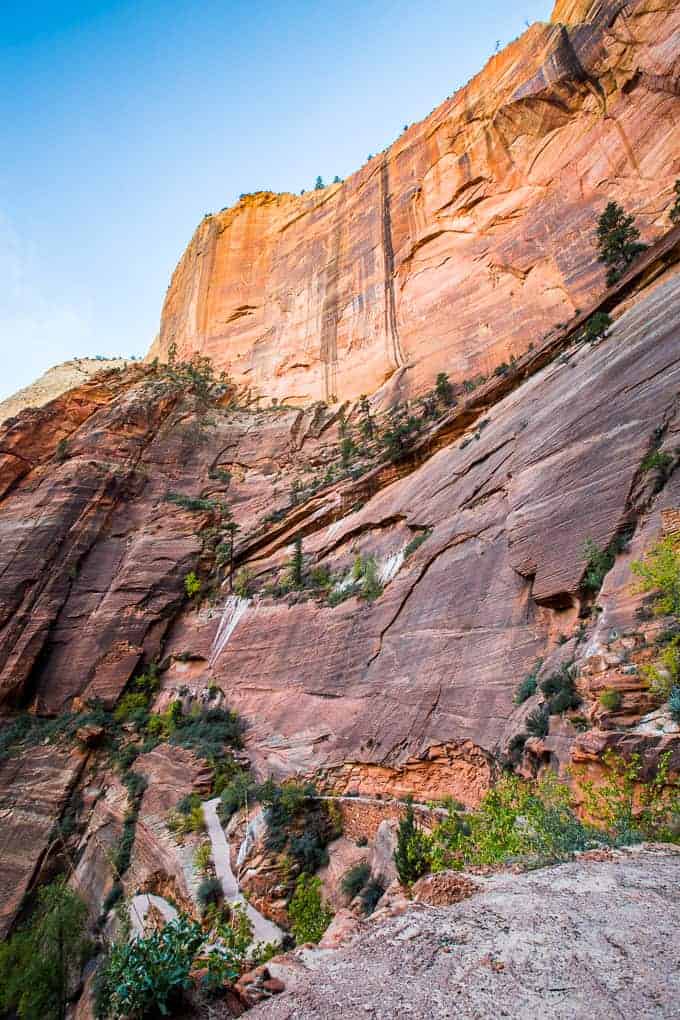 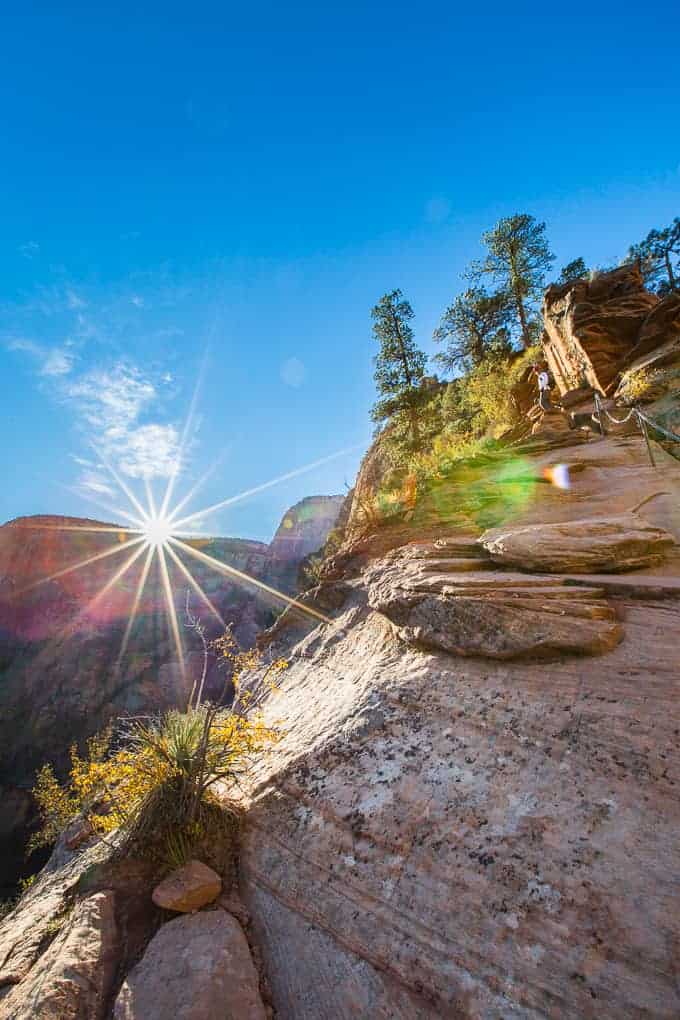 The views at the top were so incredible that I spent over an hour taking pictures which made us run a little late, and we started experiencing some major traffic jams on the way back down, (even in the off season). 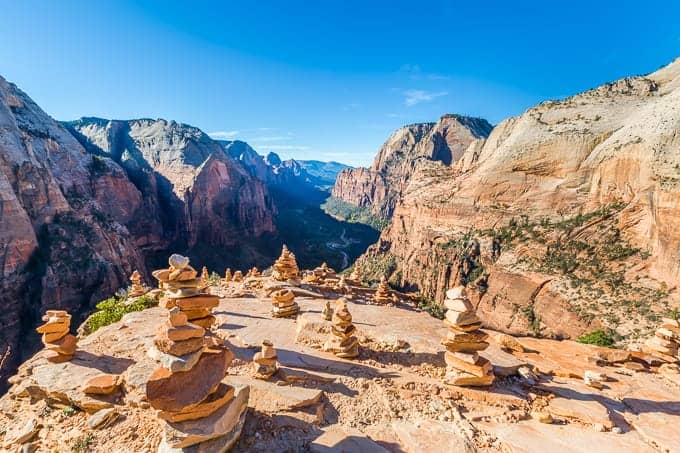 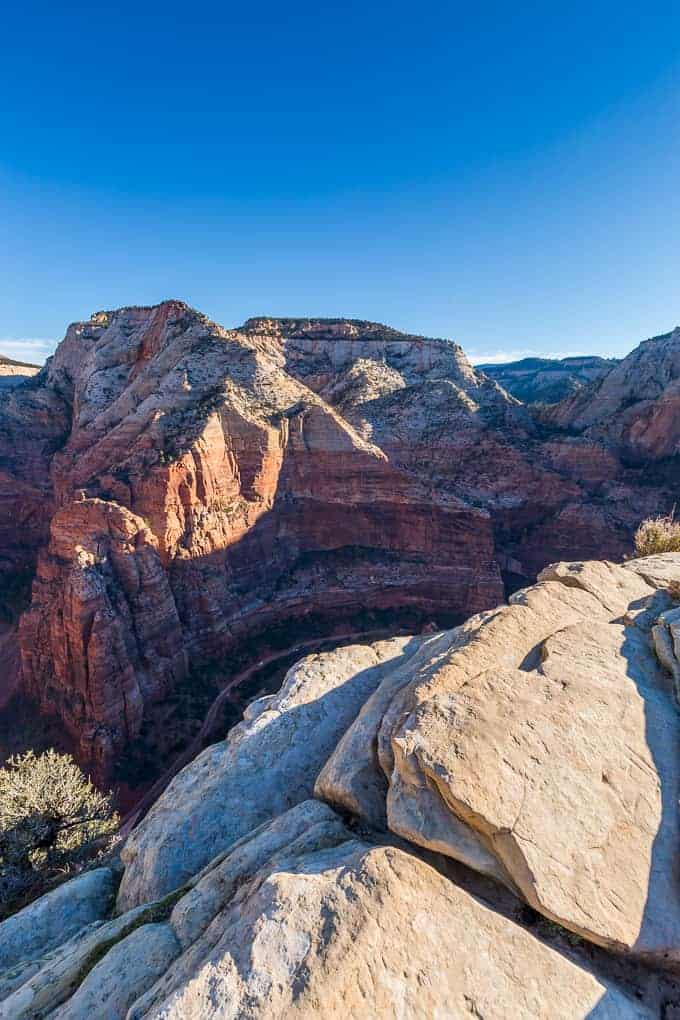 The best thing to do on this hike is to be really patient if you start running into crowds. There are so many narrow sections that it’s often 1 way traffic only, so people have to take turns. We ended up in a bit of a situation on the way back down with one women who was completely out of her depth. We were in one of the super narrow sections with drop offs and no place to go, Tyler managed to get to a corner and tucked out of the way, but I was stranded in the middle of the section as the woman continued to advance up the mountain.

People started yelling at her to stay put because there was no where for me to go, but she didn’t speak English and was clearly scared out of her mind, (her arms were wrapped around the chain – obviously not a good sign). I was using hand gestures to tell her to stay put, but she was gesturing at me to get out of her way… since I had no where to go I just stood my ground. There’s no way I was going to stand on the edge of a 1,000′ drop and hope she didn’t knock me off as she passed by, (I mean we’re only talking about 12 inches of space between the chain and the drop off). 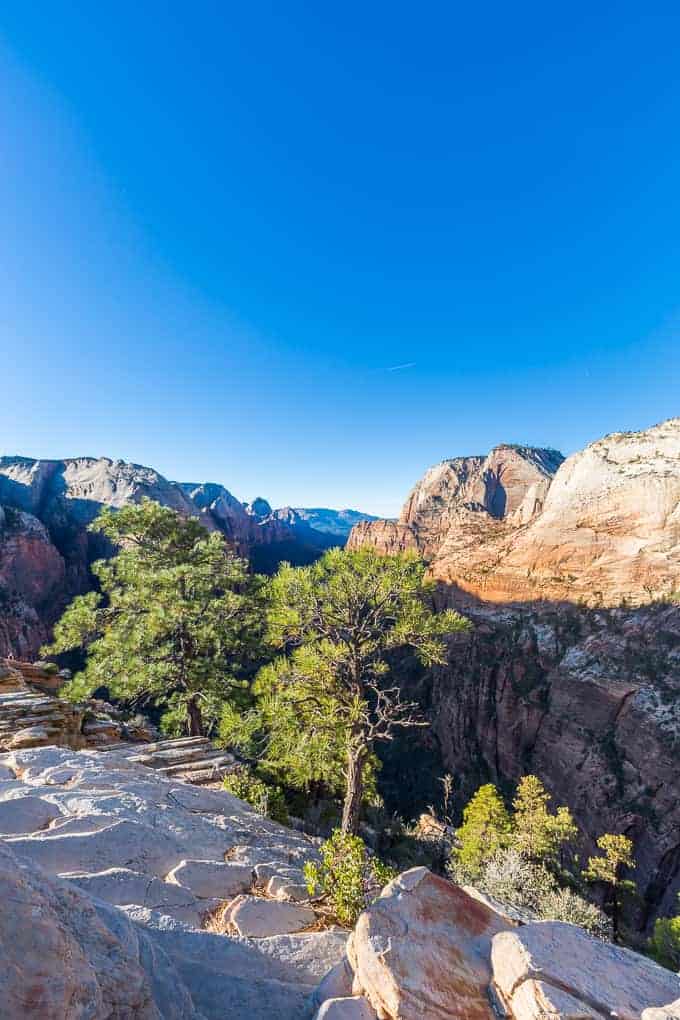 Luckily her husband was more clear headed and realized what everyone was gesturing about, and spoke to her in their language convincing her to stay put. I was finally able to pass and the rest of the trip down was uneventful, but I think you can see what I mean about going early enough to avoid the crowds.

I personally wasn’t sure if I would be ok with this hike even though I’ve done lots of scrambling in the Canadian Rockies. I did lots of research before we went to see what I was in for, and we decided before we started hiking that if either one of us felt uncomfortable we would immediately turn around – it’s always better to err on the side of safety. But after doing this hike, I can say that the only time I felt really scared was when that lady was loosing it on the side of the mountain. 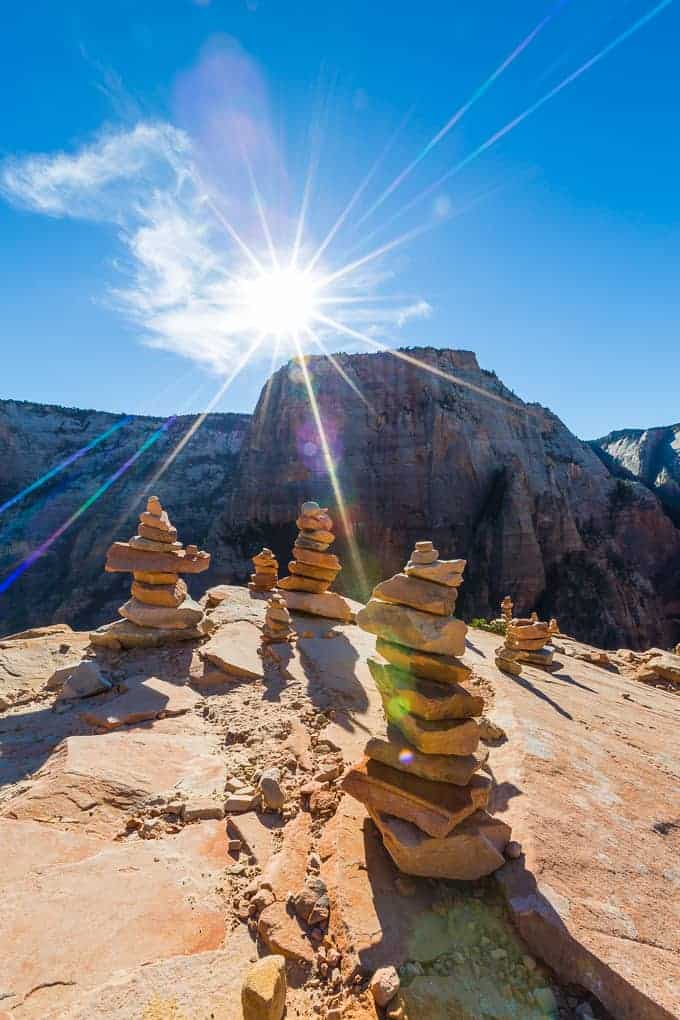 And one more really important thing I wanted to mention is footwear, this is not a hike for sandals or anything less than a shoe/boot you’re really comfortable with along with a Vibram sole. You’re basically crawling up a narrow stretch of sand covered rock with steep drop offs, so you want to be absolutely sure of your step!

If you do decide to hike Angels Landing, you’ll be in for some of the best views of your life, and if you’re used to mountaineering you might even find this exposed hike to be a lot of fun. Like I said before, it will depend entirely on you and if you think this isn’t a good option, you can always hike the West Rim trail which share the same trailhead. Or you can also try Observation Point for a similar view but without the heart pounding drop offs!