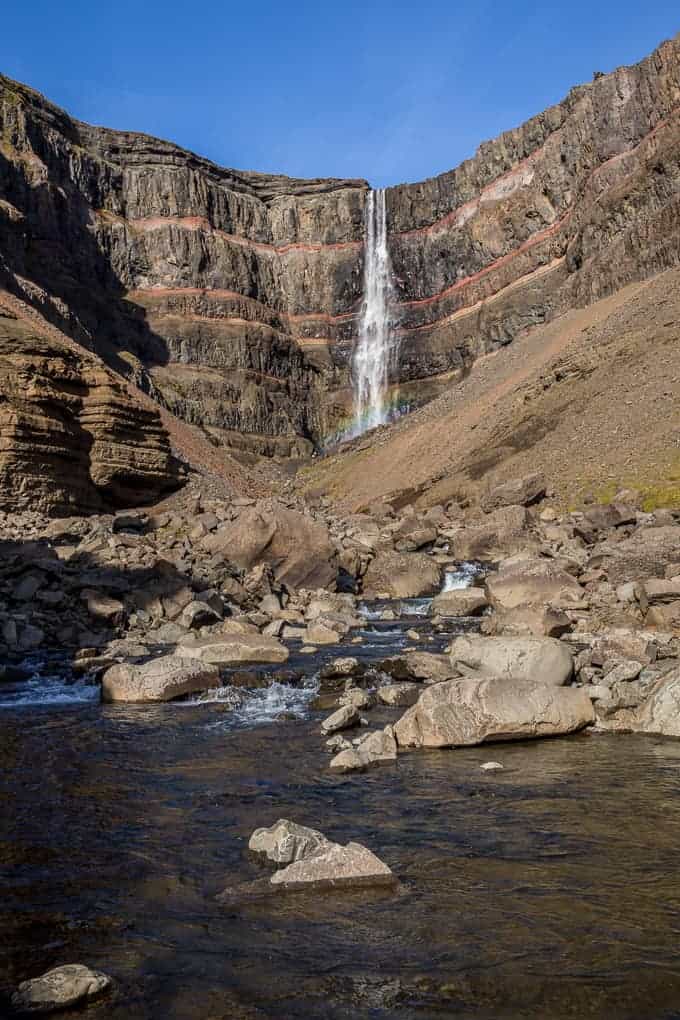 When we left off at the end of Day 9, we were driving out of a wicked storm that was hitting the East Fjords. Luckily as we moved inland, the rain and wind died down a bit. After what seemed like driving forever, we finally found a place to pull over and sleep for a few hours.

We wanted to find a spot that would be perfect to wake up, roll out of bed, and set up a time lapse for the sunrise. And when you have specific ideas in mind, it definitely adds to the time factor when trying to find a spot to sleep. But we figured it would be worth it, so after finding our spot, we set the alarm for a few hours later. 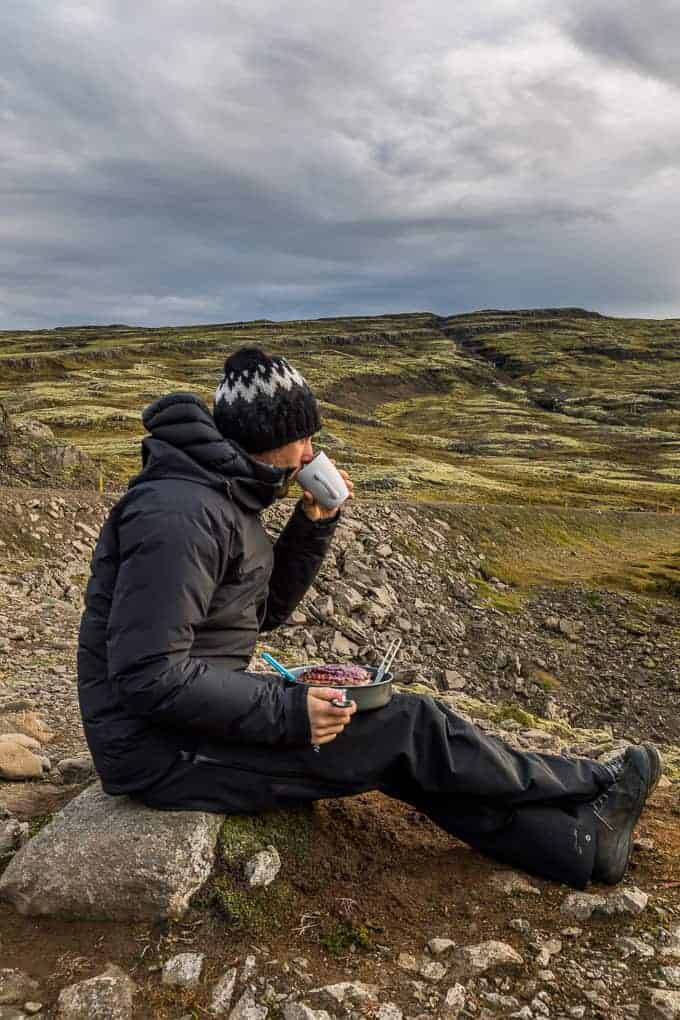 By now, I’m guessing it’s no surprise that we were still struggling to find enough time to sleep. The scenery was just so breath taking, neither one of us could slow down. And even when the weather was terrible, we’d find ourselves driving to the next location, and doing some housekeeping to keep our photos organized and sorted.

This sort of thing is a problem for us even when we’re just visiting our local national park, (Glacier National Park) for a weekend. Which of course is one of the reasons we picked up time lapsing as a habit in the first place. Time lapses take a while to set up, then it’s least 30 minutes to 12 hours before they’re done. So we find it to be the ideal way to combine our photography/videography obsession with a little kicked back lifestyle thrown in. 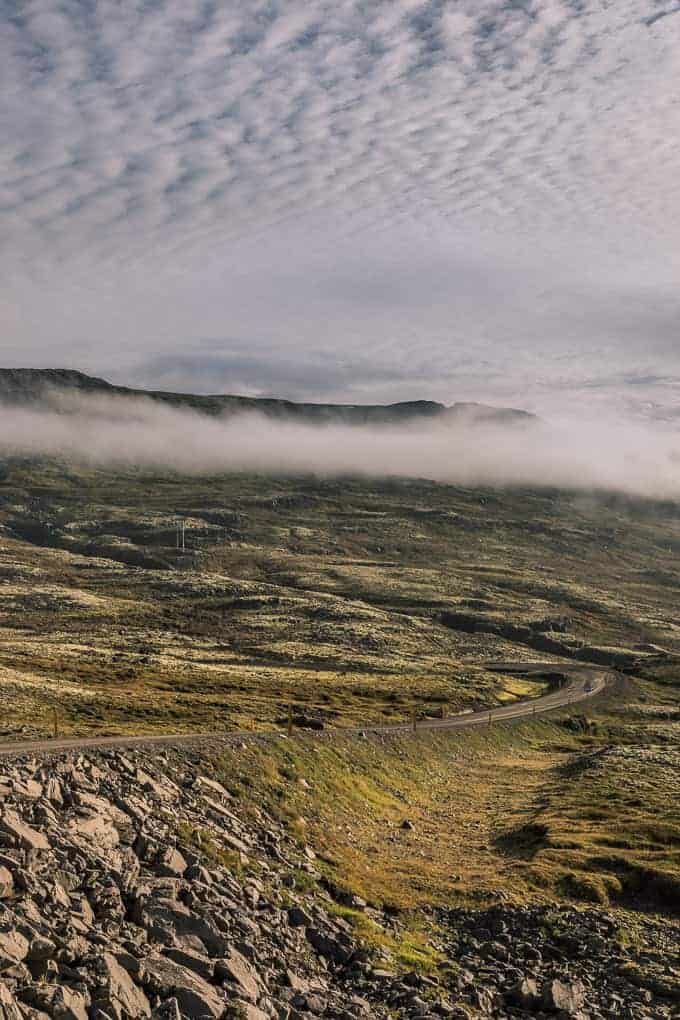 The next morning when the alarm went off, I peaked outside the van, and it didn’t look at all promising for a sunrise. However you never can tell if the clouds will break at the right time. So despite things looking dark and gloomy, we got up, and started setting up anyways. But I’m not going to sugar coat it, being on day 10 of going like absolute maniacs often with no more than 1-2 hours of sleep, I wanted nothing more than to stay in my cozy bed.

Instead I did what I always do when I’m not feeling it, I jumped out of bed and started piling on the layers, (as it was quite chilly) before heading straight to the stove to make some coffee. Tyler finished setting up the time lapse, and I delivered the first coffee of the day. Then I went to work making a proper breakfast since we’d be waiting on our time lapse for an hour or so. 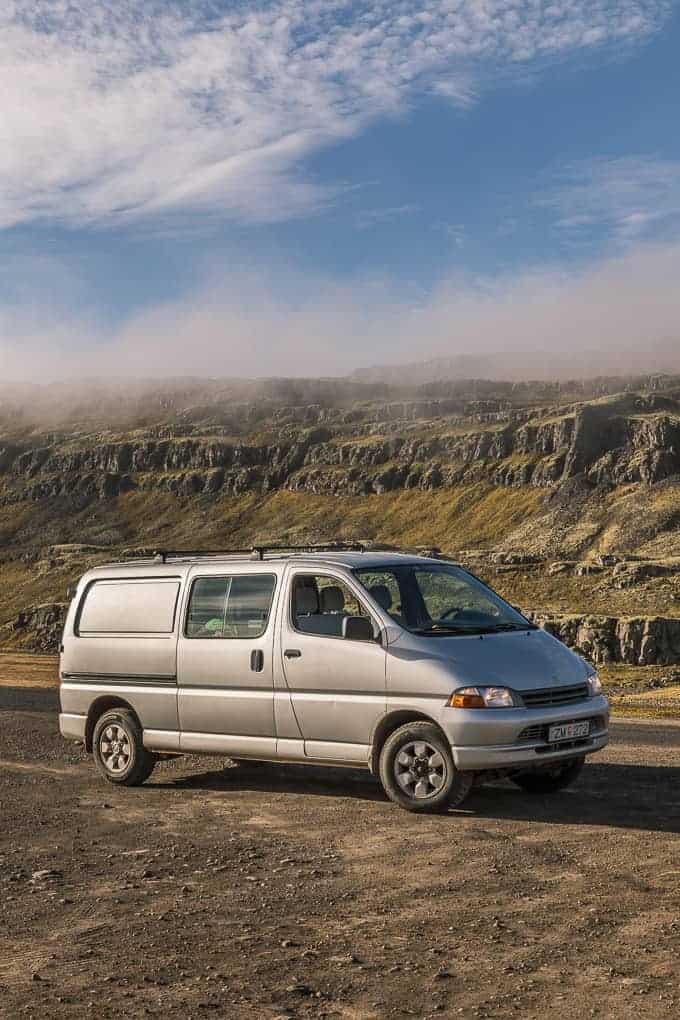 This particular morning I made the best pancakes of the trip. I’m going to do a full post about how we cooked gluten free meals out of the van for all but 1 of our meals during our 15 days there. But for today let’s talk about pancakes! I had brought a paleo pancake mix over with us from the States along with freeze dried berries.

These berries turned out to be a great idea because they weigh almost nothing in your luggage. But they add a ton of flavor to things like pancake mix or local Icelandic yogurt. If you’re not on a restricted diet, I’m guessing you’re not going to need to bring too much with you. But since I wasn’t sure of what I’d find when I got there, I brought a few things for all the days we were a long way from the nearest town. This turned out to be really ideal for us, but more on that in the future. 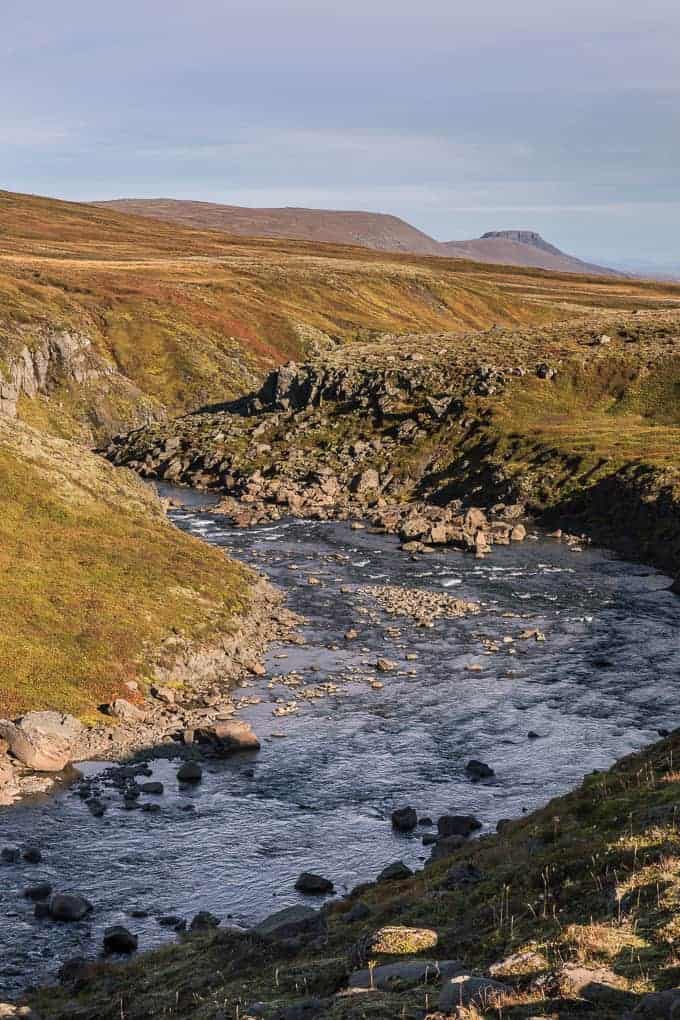 So anyways, I crushed up some of the freeze dried raspberries, and mixed up the pancake batter right in the package it came in for the least amount of dishes possible. Then while gratefully sipping away on my much needed coffee, I started cooking pancakes.

As each pancake finished cooking, I placed them in our 2nd skillet we were using as a bowl. Then I layered them with this fruit sweetened raspberry jam which is widely available in the States as well as Iceland. Finally over the top of the raspberry jam layer, I spooned on Creme Brulee Icelandic yogurt. Once all the pancake batter was cooked, layered, and stacked, we sat down on a sort of flat rock with a second cup of coffee to share our massive pancake stack, and watch the sunrise, (2nd photo in the post). 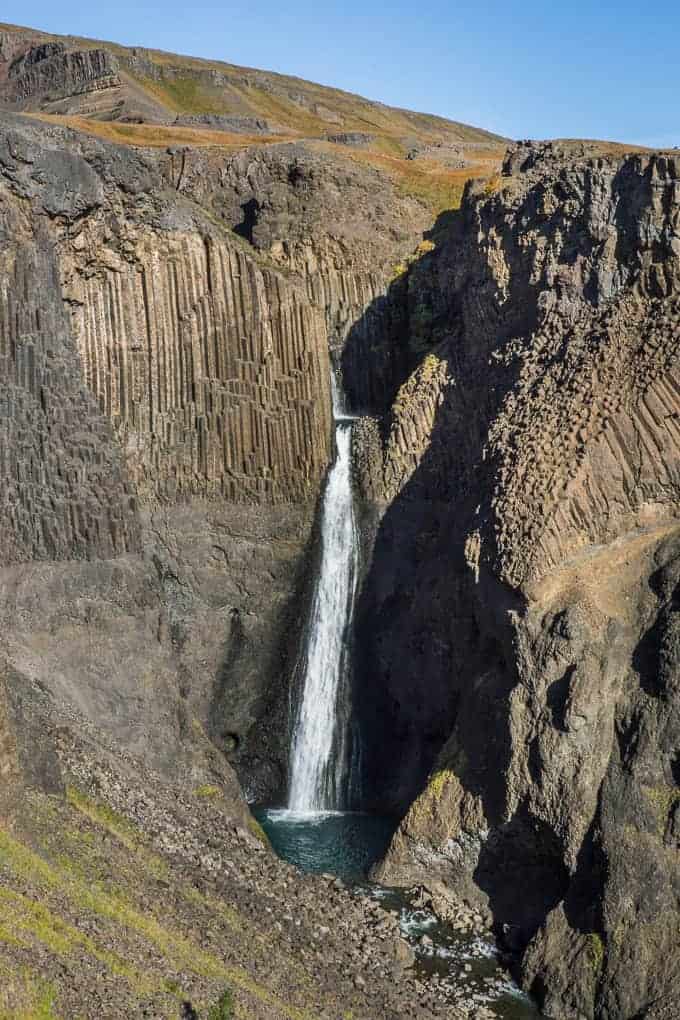 This ended up being one of the best breakfasts we made on the trip. It also made for a memorable morning, even though the time lapse didn’t turn out all that great since the clouds were so gloomy. After breakfast was finished, we organized the van a bit before getting on the road to head towards Hengifoss waterfall.

This waterfall is unique because of the orange striped bands in the rock face. We were actually supposed to hike it the day before, but since we ended up trapped in the middle of a sheep herding, we didn’t quite make it that far. The drive inland from the East Fjords toward the trail head for Hengifoss was gorgeous as the sun finally began to break out of the clouds, and we found ourselves stopping often to take photos. 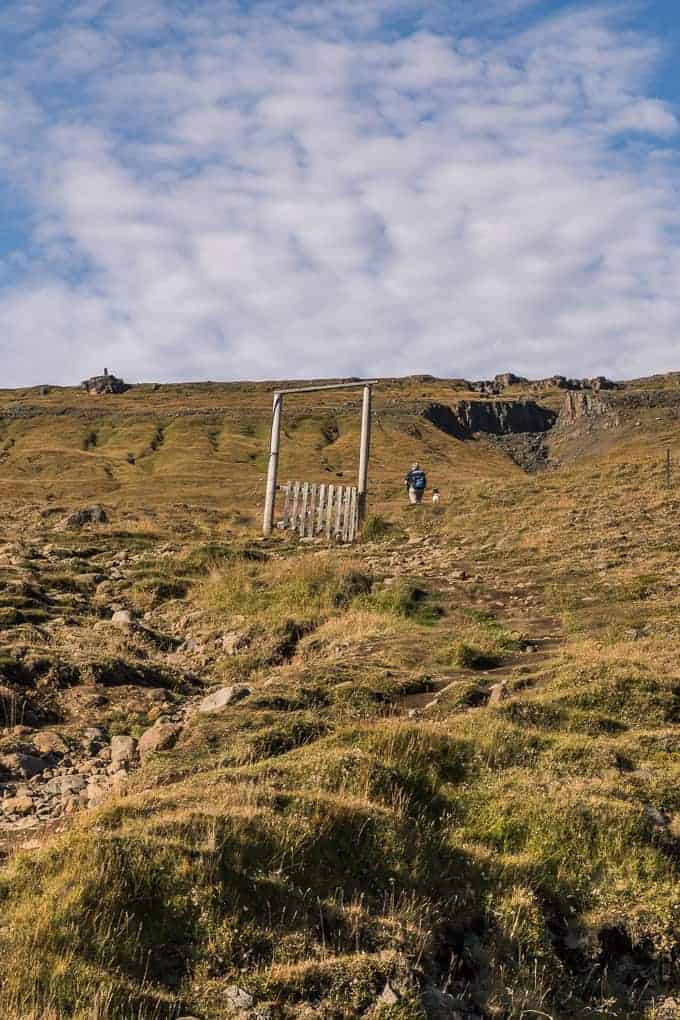 But finally we decided we really needed to reign it in if we were going to do any hiking that day. This was a good decision because when we got to the parking lot, we were surprised to see it was almost full. And we got the only parking space left that was big enough to hold the van. Since this waterfall is supposed to be a little more off the beaten path, we naively thought it would be quiet – but of course it was far from it. 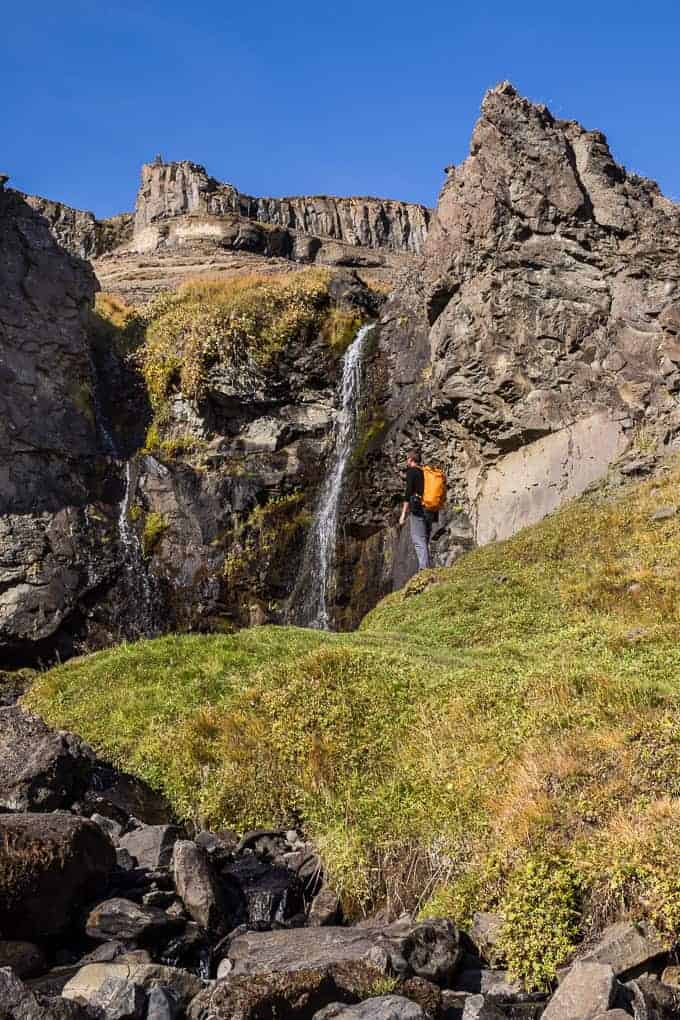 Although I will say it was much quieter than the ever popular south coast. So we got all our gear ready and started hiking up the hill. This hike does gain elevation quickly, but the hike is pretty short so it’s not too difficult. You get to see another gorgeous waterfall right away on your way up, with lovely rock columns framing it. Then the trail continues on up and through a gate before winding through some areas with small trickling waterfalls. 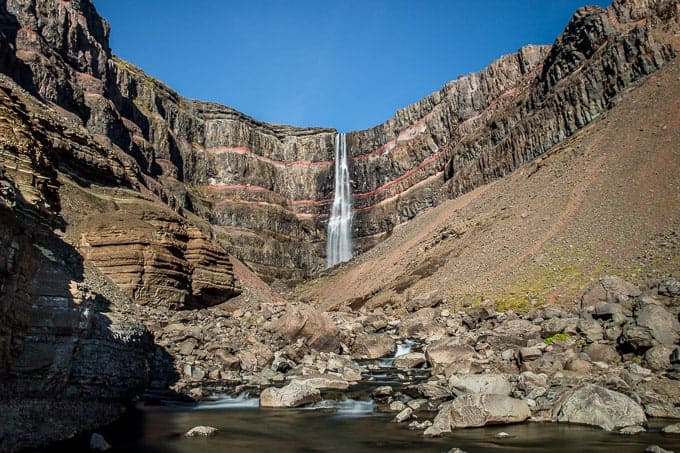 Finally you’ll come around the corner, and Hengifoss comes into view with it’s intriguing orange stripes, (pictured above). And like many waterfalls in Iceland, on a sunny day you’ll see a rainbow in the mist. I set up the tripod to start taking pictures with people elbowing and running into me constantly, while Tyler headed upstream to get out of sight and fly the drone.

After a while, some of the bigger groups left. The whole area quieted down, and I could actually enjoy myself without constant fear of my gear getting knocked over into the river. It was definitely worth waiting a bit longer for the main big groups to leave, because it was absolutely enchanting with a few less people. The few that remained sunned on the rocks, and swam in the river just enjoying the scenery. 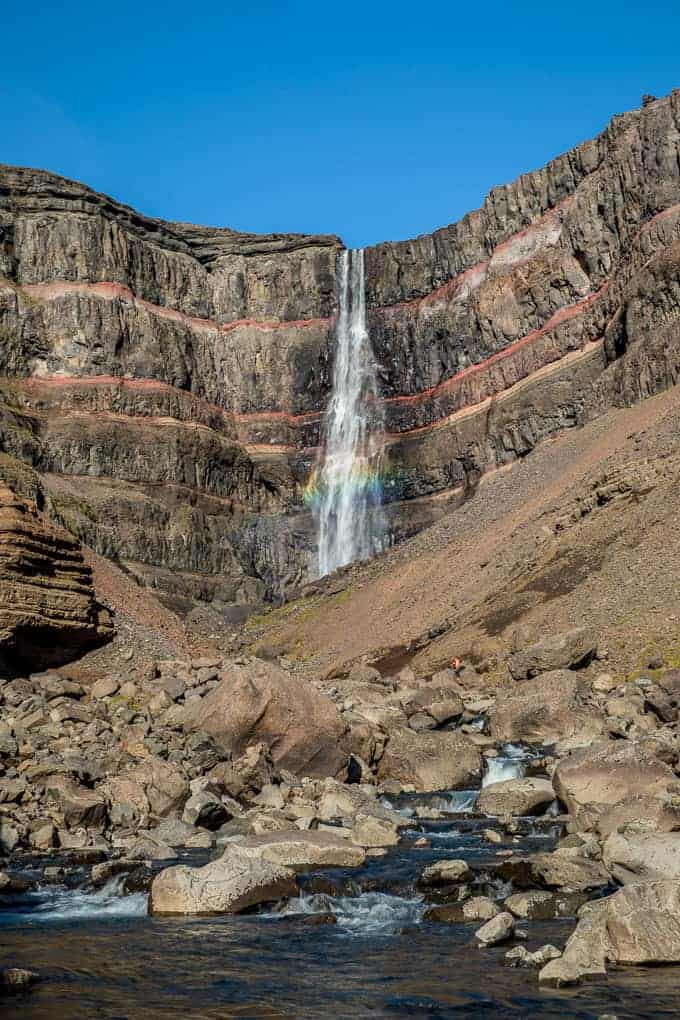 It was truly the first warm day we had experienced in Iceland, and it felt good not to have 3 heavy layers on for a bit. After spending plenty of time enjoying the surroundings, we finally hiked back to get on the road for Dettifoss waterfall.

We knew we had a 30km drive in on a gravel road to get to the east side of the waterfall. The attraction of this side is you can walk right up to the edge of the most powerful waterfall in Europe and watch the water thunder right past you feet and over the drop off. You can see this best in the last photo of the post. It’s really nothing short of spectacular, however the road was so much worse than advertised. 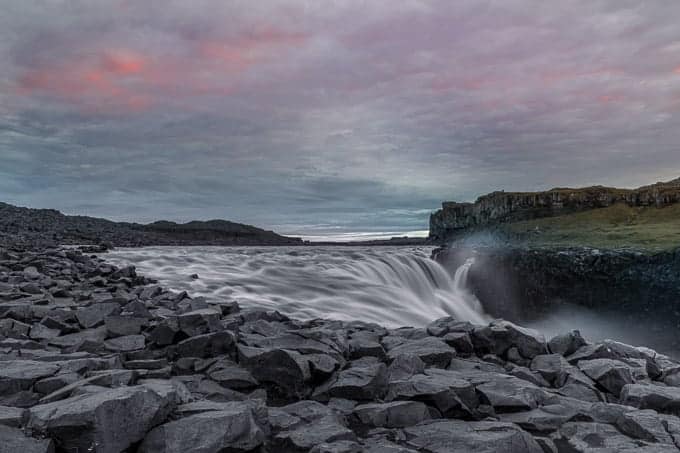 We were under the impression from online sources the road was in good condition, and it’s not and F-road after all, so how bad can it be? The answer in short, bad… very bad. Our van was lacking any sort of suspension, having probably lost it on an F-road a decade ago. So it made our journey up the east side extra rough, and extra long.

We finally arrived when there was just the palest hint of color left in the sky, and night was coming on fast. We were also dismayed to find there was no overnight parking allowed when we got there, and nowhere to camp on the 30 km in. We were planning on seeing Selfoss, (it’s a couple kilometers walk from Dettifoss) first thing in the morning because it’s best photographed from the east side. 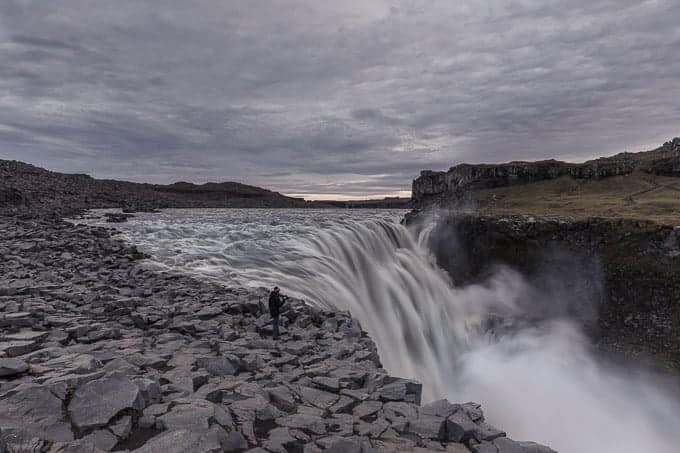 But since it’s in a National Park, we didn’t want to break the rules. So after taking some photos, we knew we’d have to give up on seeing Selfoss from it’s best angle. And then it was back to 30km of bone rattling, mind numbing jarring all the way back out. If you have a nicer vehicle that hasn’t been in the backcountry of Iceland for decades, I’m guessing it won’t be as bad for you.

However just be aware if you rent something along the lines of a Toyota Prius, you’ll be going super slow so as to not break an axle trying to get out of this road. I mean the potholes could swallow and Prius whole, if you get my drift. Or maybe it will be your luck that the road will have been smoothed out and grated when you go! 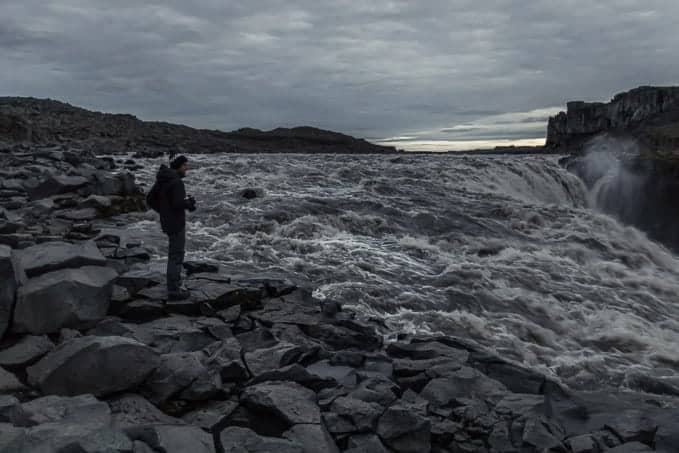 When we finally hit the blacktop again, we were both exhausted with a slight headache from all the jarring. So we pulled off in the first rest stop to get some sleep before seeing Dettifoss, (and this time Selfoss) bright and early the next day from the west side on Day 11!