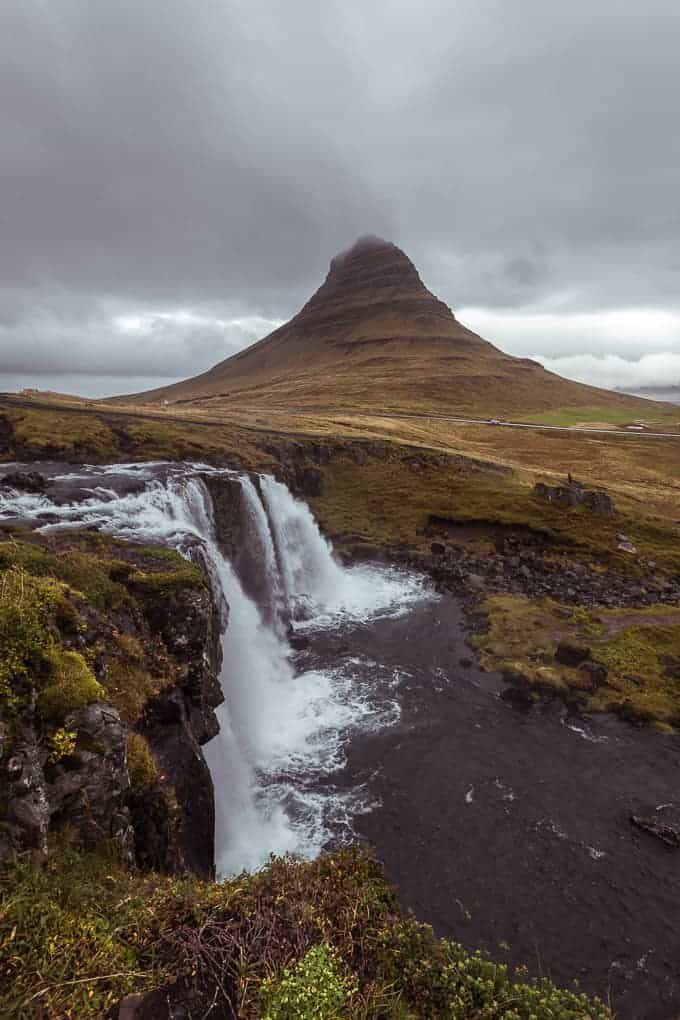 When we left off at the end of Day 12, we had finally found a campground to stay at in the middle of a wicked storm. It was pouring rain, and the wind was positively howling, which always means it’s going to be hard to sleep when you’re not sure whether or not you might actually tip over inside your vehicle in the middle of the night.

But since we had been going around the clock most days of this trip, we slept pretty good all things considering. Our trip down the muddy dirt road the night before to see the Hvitserkur rock had left the van muddier than I’ve ever seen a vehicle before. And considering we live in Montana where dirt roads are abundant, that’s really saying something. 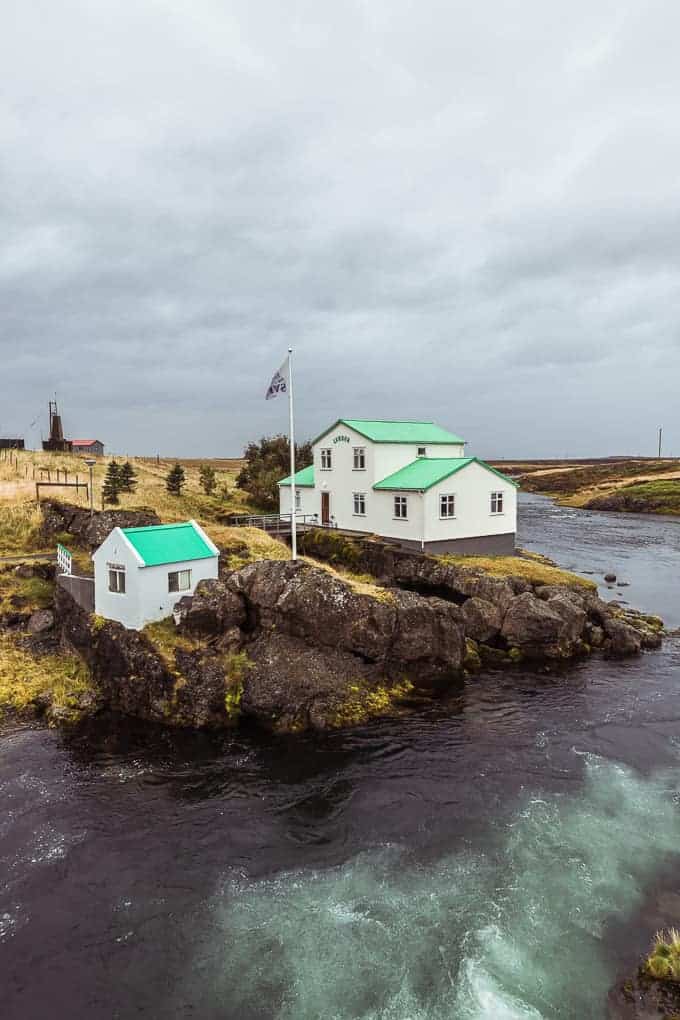 So you’d think by the next morning after such a crazy rain storm, the van might be clean, but it wasn’t even close! Luckily the campground we stayed in had a station with a place where we could hose the van down. This was really was awesome because it’s so hard to get in and out of a vehicle without spreading the mud everywhere. 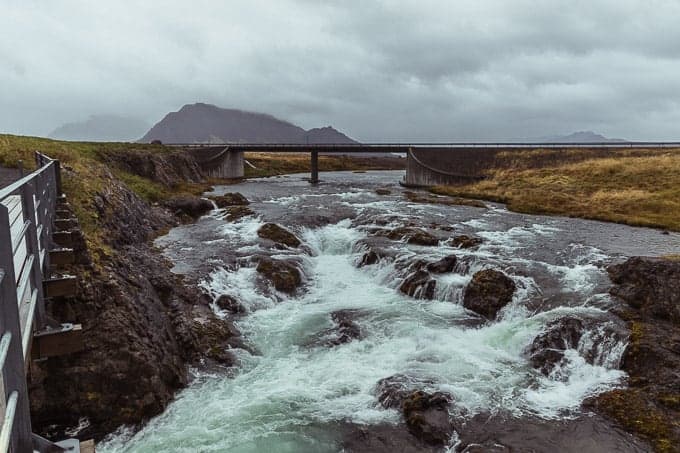 Since it was still raining pretty hard, we decided on a slightly more relaxed day of hot spring hunting. But first we made breakfast in the pouring rain with wind gusting every which way. It really would have been the ultimate kind of morning to go out to eat for breakfast. But since we were in the middle of nowhere, we just braved out the weather in head to toe gortex.

A little while later, we had blueberry pancakes topped with Icelandic blueberry yogurt and a hot cup of coffee inside the warm, (and now clean van). After breakfast we finally got on the road to start looking for a hot spring. Along the way we made a quick stop at this beautiful blue-green waterfall called Bruarfoss, (above photo). This one is not to be confused with the much sought after Bruarfoss in the Golden Circle which we’ll talk about in Day 14. 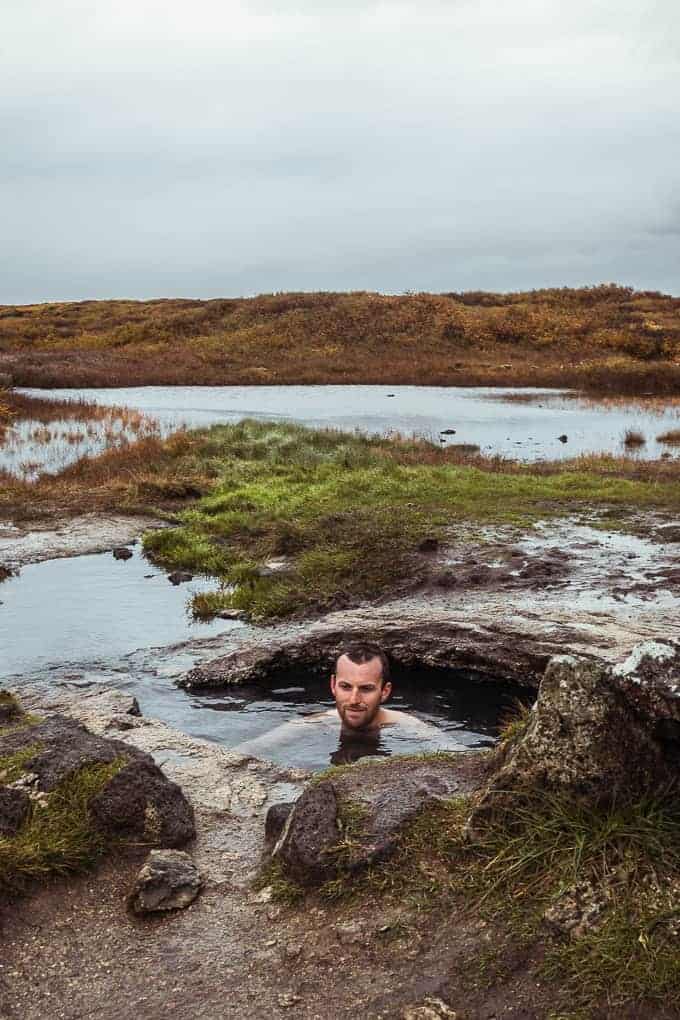 We had a couple different hot springs in mind, but one in particular looked really appealing since it was just a hole in the ground, (see above photo). Even though we only had sketchy directions, we actually found it, and just in time. There was a couple who had been enjoying the hot springs getting ready to leave when we arrived. 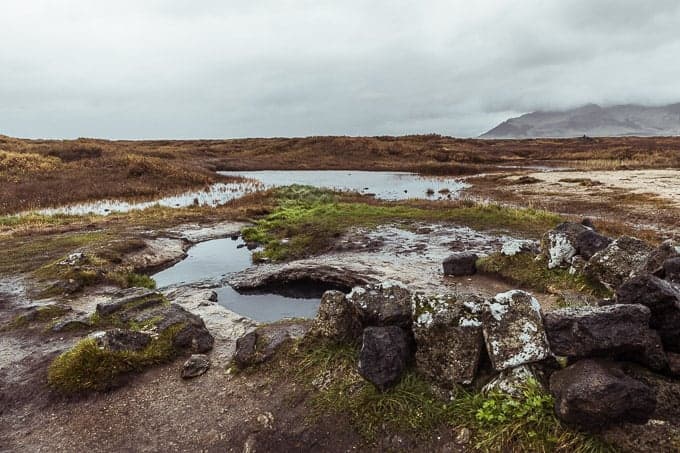 Since the whole area is wide open, (as you can see in the photos) we hung back in the van trying to give them some privacy to change. But 5 minutes later, I could see several cars pulling in, so we vaulted out of the van, and raced for the hot spring. You’d think this might be a bit dramatic, but this particular hot spring only has room for 2 people in it, and we didn’t want to miss it by trying to give the couple leaving some space. 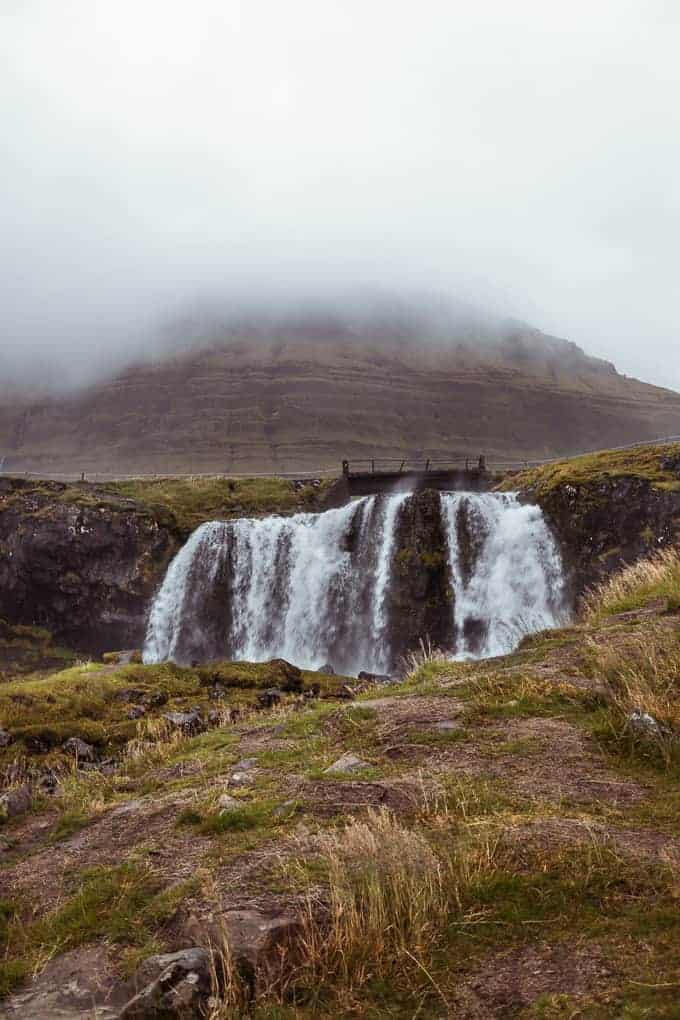 At least they had a few minutes to change out of their suits before we arrived on the scene. And luckily they didn’t mind our arrival because they could see we just didn’t want to miss our split second chance to hop into this awesome hot spring. This situation is more common in Iceland than you’d think. You track down some random hot spring with next to no directions, (just GPS coordinates) in the pouring rain in the middle of nowhere. And then you still have to race to even sit in the hot spring before someone else gets it. That’s what I call too busy, but even so I would go back in a heart beat.

Finding some hot springs that weren’t at all commercialized was one of our main goals of the trip, so we were so excited to get a shot at this one. I’ve wanted to go to Iceland ever since the 6th grade when we learned about this magical place of ‘fire and ice’ where hot water bubbled up out of the ground creating natural hot tubs. As a kid I was captivated by what we learned in history, and I knew someday I’d go to this mystical place and sit in a natural hot tub. 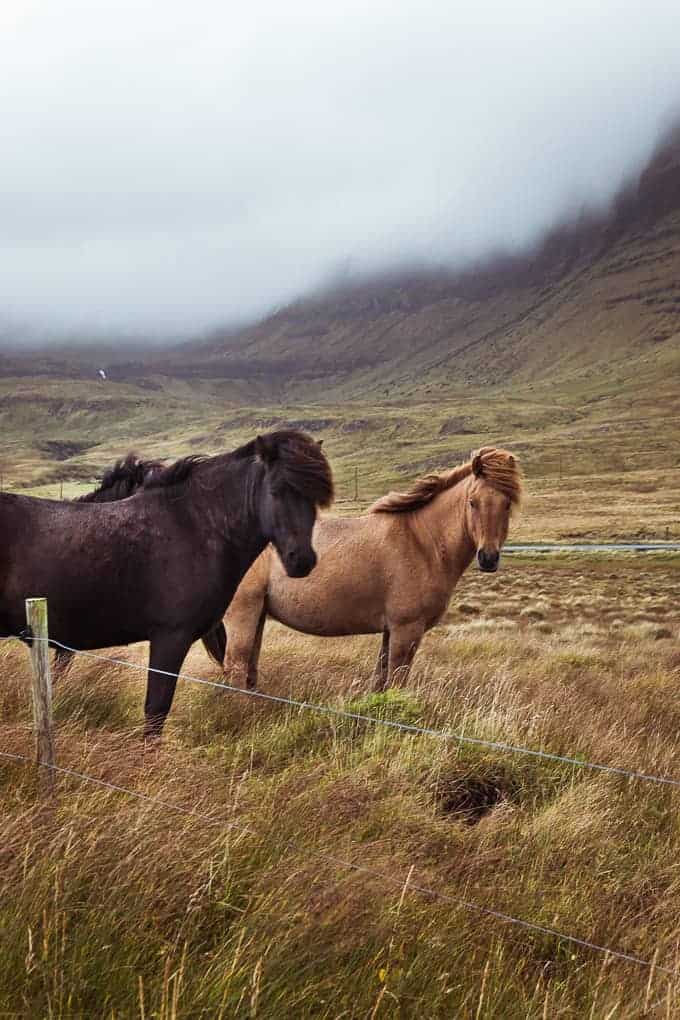 This hot spring was one of 3 we went to that wasn’t commercialized and it was totally worth tracking it down. There’s just enough room for 2, and there’s the perfect ledge for 1 person to sit submerged while the other person stands to cool off a bit. We hung out for a while, until so many people showed up wandering around that we decided to go someplace quieter. After all there’s nothing like getting out of a hot spring with an audience of 10+ clearly able to see you haven’t shaved in quite some time. While I don’t mind roughing it a bit, I usually don’t like to be so ‘on display’ about it!

Once we got back to the van and changed into our warm clothes and head to toe gortex, we got back on the road heading towards the iconic Kirkjufell mountain. We made a wrong turn when we got there, but it worked out ok other than needing to make a 20 point turn in the van since the road was so narrow. But our wrong turn did lead us to see some gorgeous Icelandic horses up close, and get some photos. 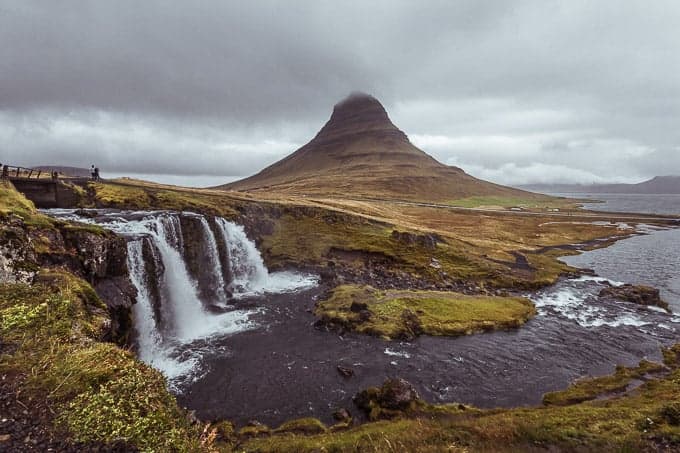 It was still pouring rain when we reached our actual destination, so the idea of getting a great sunset photo and sticking around for a possible aurora was out of the question. But since you never know if you’ll ever come back to any particular place, we put the cameras in dry bags and headed out toward the gorgeous falls.

Even in the pouring rain you can still get nice moody photos in Iceland. It’s truly the land where everywhere you turn, the scenery looks amazing in every kind of weather. We didn’t know much about this area when we set off for the falls. So we were definitely a bit surprised when we tried to head back to the parking lot, and found that the ocean tide had come so far inland, that the whole pathway back was under water. 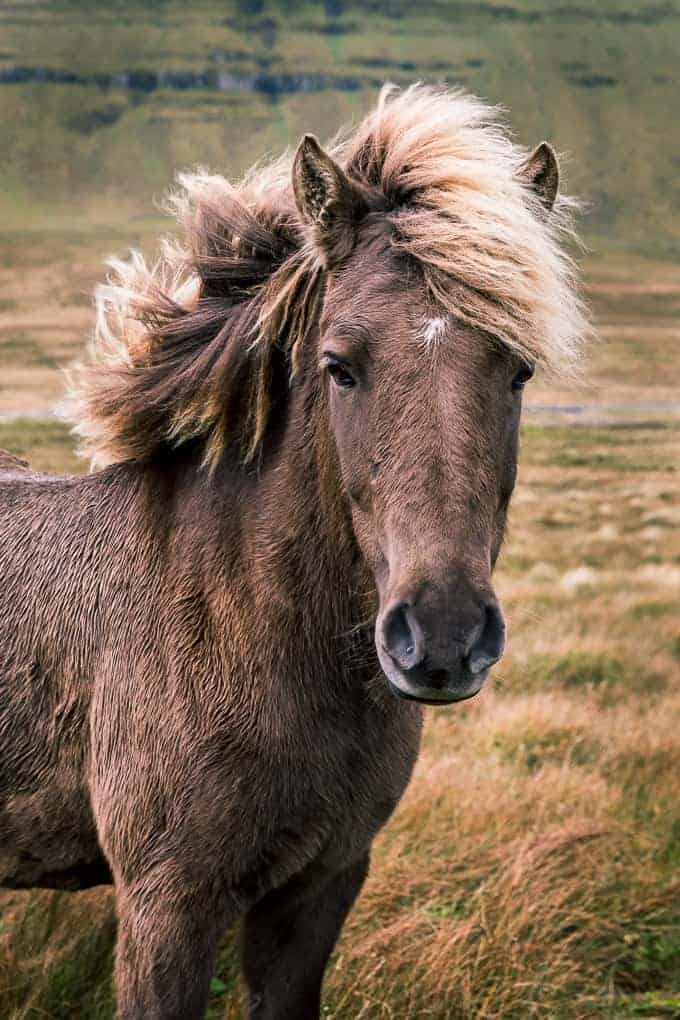 There was another small trail through the meadow out to the highway where it was obvious that many other stranded visitors had headed back out. So we had a slightly farther walk on the way back, but we were glad we made it to the waterfall before the tide came it! Just by looking at the lay of the land, I wouldn’t have even thought we’d be in the tide zone so quickly, but it just proves you really should do you research first.

By this time it was getting dark, so we decided to drive south-ish back towards the Golden Circle and Reykjavik. The storm continued to rage on without any signs of slowing down, so we drove, and then we drove some more. By this time it was the middle of the night and we decided we would just skip dinner with the way the wind was howling. It swirled around the van with such vehemence I didn’t know how on earth I would cook dinner when I could barely stand up in the gusts. So it turned out to be another protein bar dinner with a slice of Icelandic cheese, which I’m sure you’ve noticed had become a pattern 13 days into the trip. 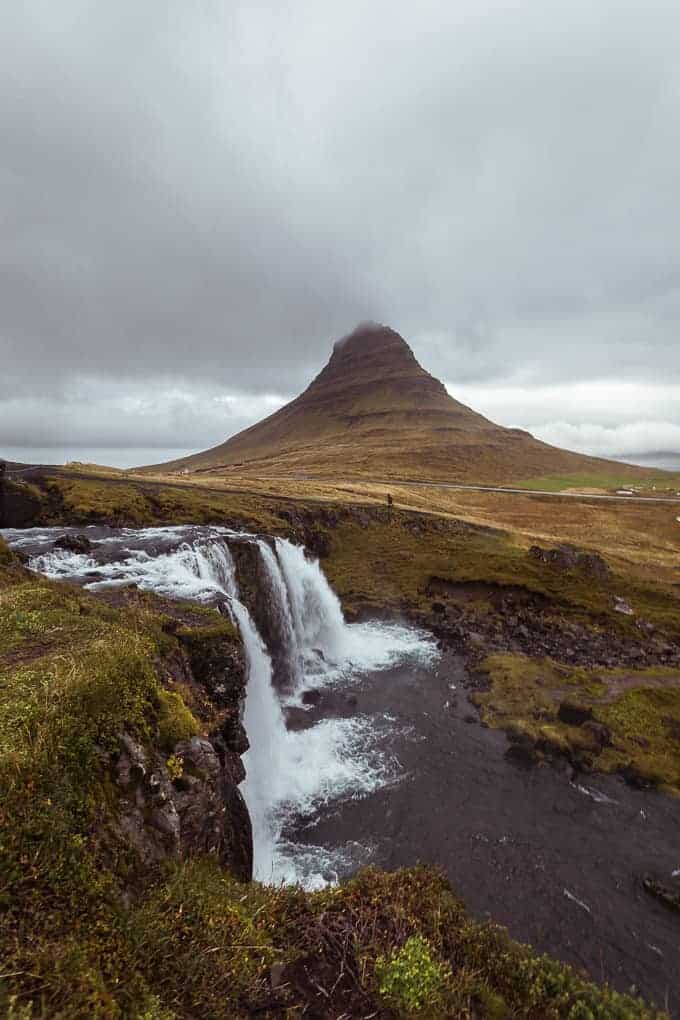 This particular night we had the hardest time looking for a place to stay overnight, but we did finally find a place to pull off and park. We faced the nose of the van into the gale force wind, and crossed our fingers we wouldn’t blow over. Which in reality was a very real possibility with those kinds of winds.

But since we parked well, everything was fine other than the fact the van was swaying to intensely it was hard to sleep. Lucky for us they were predicting better weather the next morning. So we only had a couple hours of bad winds and restless sleep, before it was time to get up and head to the next location for sunrise. To be continued on Day 14 The Golden Circle.