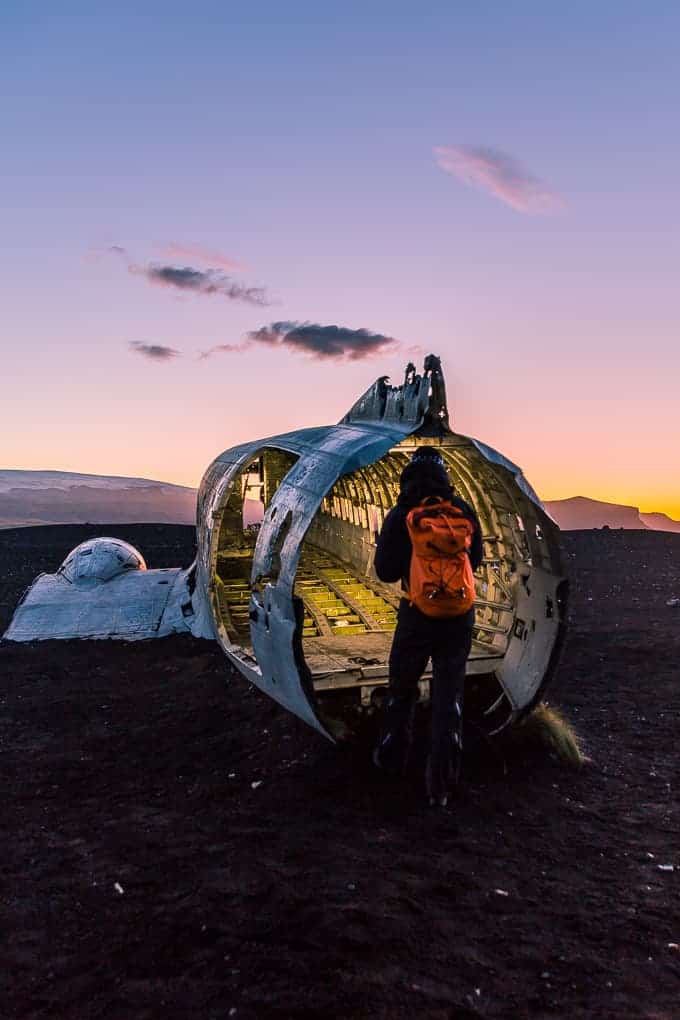 When we last left off on Day 5, we’d had a fairly restful day in comparison to our first 4 action packed days. However that was definitely short lived because Day 6 started off at the absolute crack of dawn, 2 am to be precise.

The day before we’d tried to head out to the famous Solheimasandur plane wreck. We’d thought that maybe with the rainy day it would be relatively quiet, but that was just wishful thinking. So instead of hiking out with a few hundred other people we decided to go in the next morning way before sunrise.

This turned out to be a fabulous idea because as it would happen, no one else thought getting up at 2am in the freezing cold, and hiking in the gusting coastal winds out to see a plane wreck was a good idea, except us. 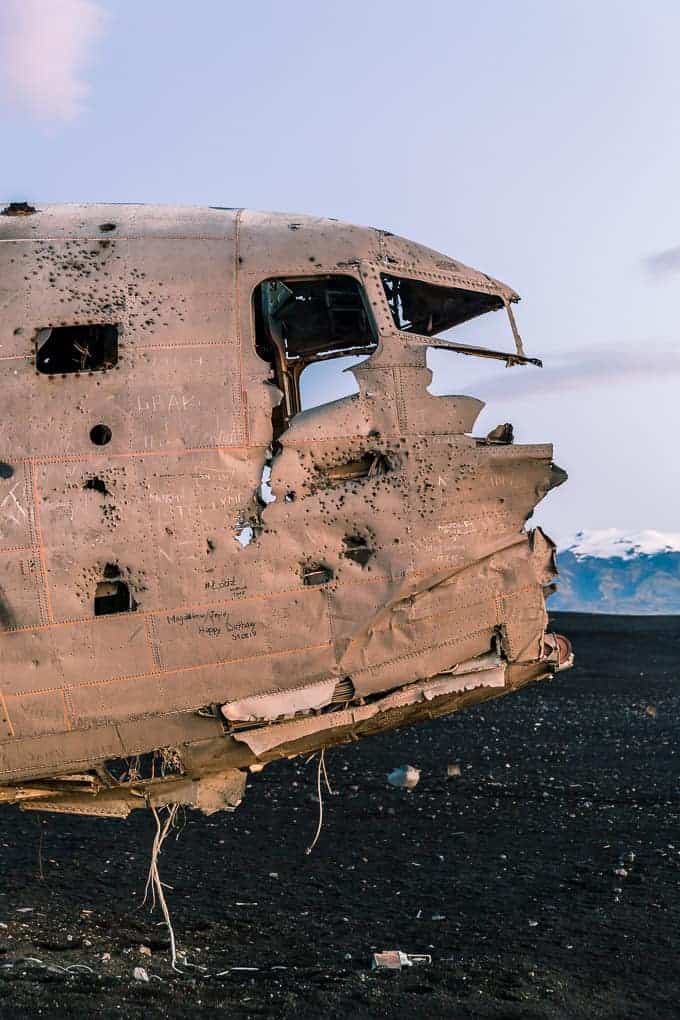 By the time we’d reached the plane wreck, we didn’t have long to wait before the earliest beginnings of a sunrise started. And as you can see we had it 100% to ourselves for about an hour. Since we wanted to be at another site during the early morning golden light, we packed up and headed out after a faint sunrise.

Predictably as we were leaving, the photographers were starting to pour in having just missed the sunrise, (the long walk out takes longer than you’d think – 2.5 miles one way). And as we were nearing the car park, people were staring to pile out of their cars for the long trek towards the wreck. We definitely made it out of there just before the rush started! 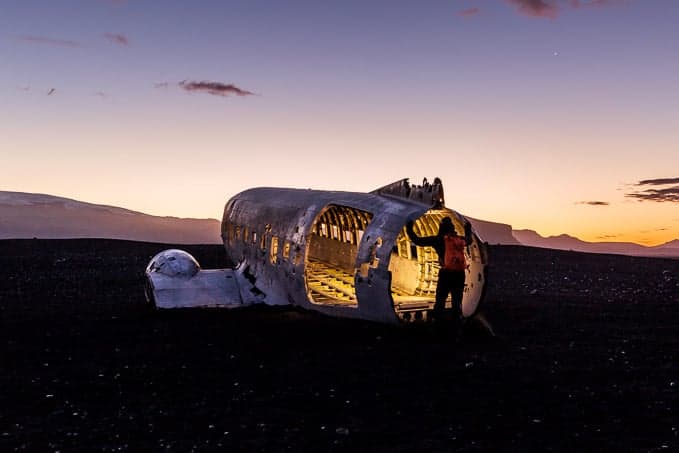 Note: I’d seen online before we left, lots of people talk about the chain being down and driving out to the plane wreck, or just bombing across the land towards the sea tearing up the ground trying to find it. And I just wanted to mention this is private property, (as are many popular attractions in Iceland) so you really want to have respect for the land owners kind enough to allow hundreds of people a day onto their property, (pack it in, and pack it out mentality).

It’s also illegal to off-road in Iceland and if you’re caught doing it, it’s a very big fine. When they talk about ‘off-roading’ what they mean is that you’re driving on roads that are so rough, most rental vehicles aren’t allowed on them. They don’t mean tearing through the land wherever you please. It’s a fragile eco system, and off-roading causes damage that could take decades, and even hundreds of years to repair itself.

Next we headed down the road to the large area surrounding the Dyrhólaey arch, just in time to catch the most fantastic golden morning. The sunrise might have been mild, but all the gorgeous golden color for the next 2 hours was nothing short of spectacular on the cliffs surrounding the ocean.

Everything was lit up with a golden glow, and for a split second I found myself almost frantic trying to figure out what to photograph first. But then I caught myself, took a deep breath and just took it all in.

This sound of the waves below combined with the beautiful morning was so hypnotic I felt like I could stay all day. But of course this being Iceland, there is nothing but site seeing non-stop to be had. So we finally packed it up and headed to the Dyrhólaey arch a few minutes up the road. 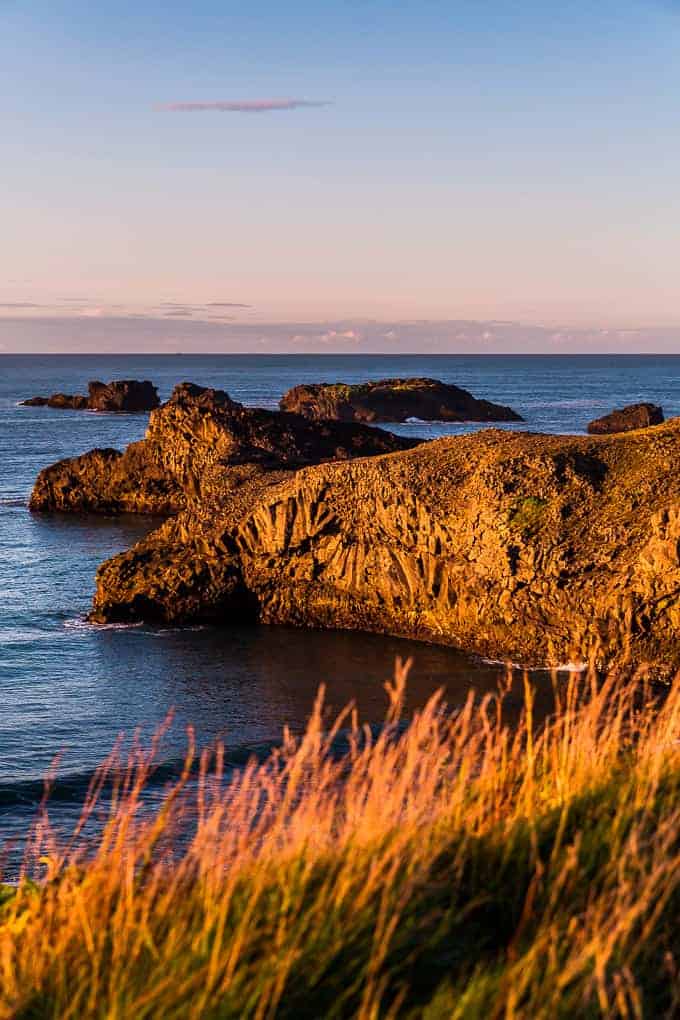 By the time we got to the Dyrhólaey arch, (pictured 3 photos below) the mid-day light was upon us. But since you only get to see these things once in a lifetime, we kept taking pictures to have the memories. And then we headed down the road a few miles again to come to the famous black sand beach called Reynisfjara, (which is the name you’ll be looking for on the road sign). 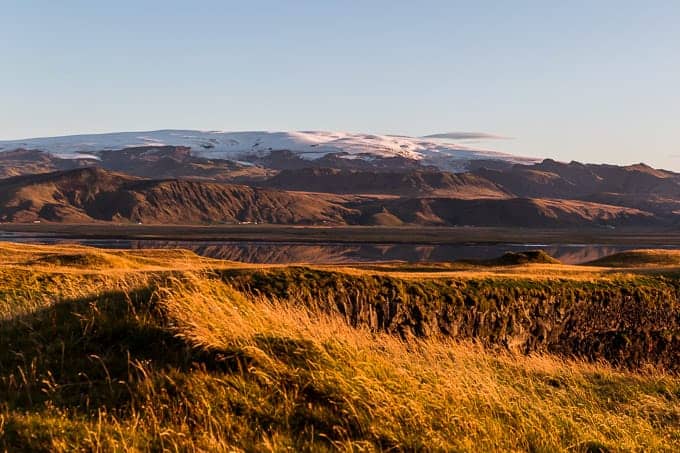 By this time it was nearing noon, and there were tons of people heading into this popular site. We were lucky enough to find a parking spot to squeeze our gigantic van into though. So we packed up all our gear and headed out again for another photoshoot. This time though, things were about to get extra exciting/stressful.

First off, we wasted copious amounts of time trying to get a few shots without 400 people standing right in front of the camera. Seriously I can’t even tell you how many times someone would cut right in front of me, even running right into me to get their shot right in front of my camera lens. You’ll want to bring all the patience you posses and then some if you happen to be at any of the prime tourist attractions during the peak daylight hours. 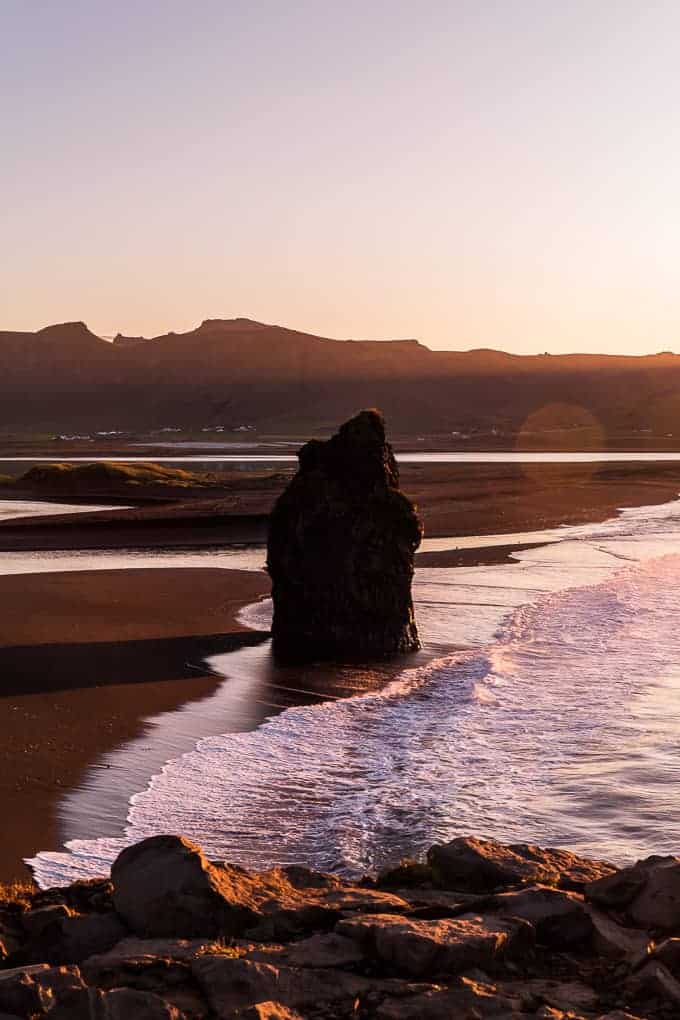 But finally after getting a couple shots of the famous rock columns, (pictured 2 photos below) we headed down the beach to get away from it all, and get the drone out. 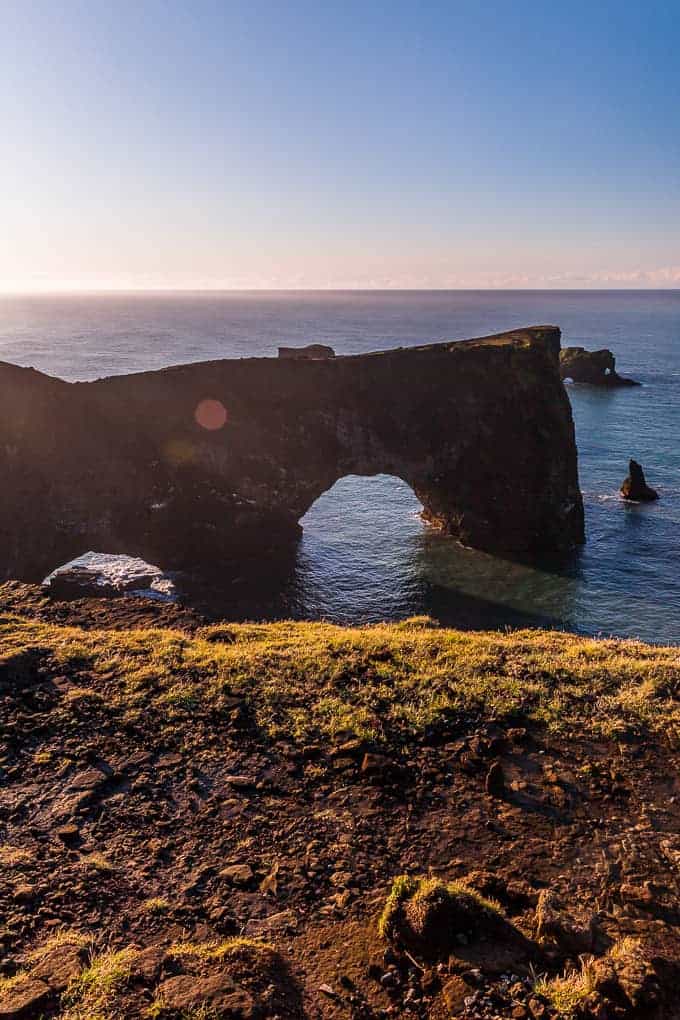 This particular beach might be famous for it’s stunning black rock, but the crashing waves can really take you by surprise. They’re what you might call creeper waves, they’ll be steady for 10 even 15 minutes, and then out of nowhere a large wave will roll in coming 50-100 feet further into shore, often taking people by surprise. And every year several people die here being swept out to sea by these powerful waves, so definitely watch you step here.

While Tyler started to set up the drone, I watched a wedding photo shoot take place, (last picture in the post). I couldn’t help but wonder what the final photos would look like, I mean… what a dreamy wedding location! 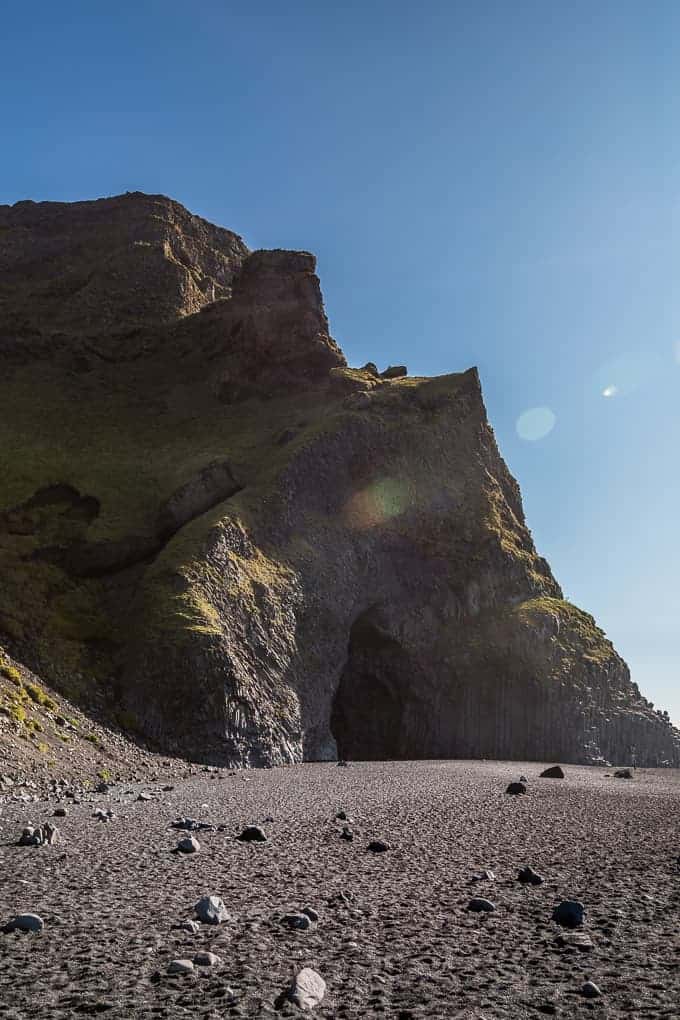 But anyways, back to the story, Tyler took the drone up for a flight, and I was playing around with the cameras. All of a sudden, he came tearing over to me with a frantic look in his eye and said, ‘I think I just crashed the drone!’. I think my mouth fell open, and I was at a loss for words for a split second before I asked where it went down. I figured it was probably lost in the ocean, but he said he had took it up for a flight panning across the small mountain behind us, (which was to the left of the high point in the above photo.)

Everything was going fine until he lost connection with it, and it didn’t return to us like it’s programmed to do. Instead it went rogue and started flying itself, which of course is how it ended up crashing into the side of the mountain. Luckily these things come with a GPS connection for as long as the battery lasts, (which isn’t all that long). 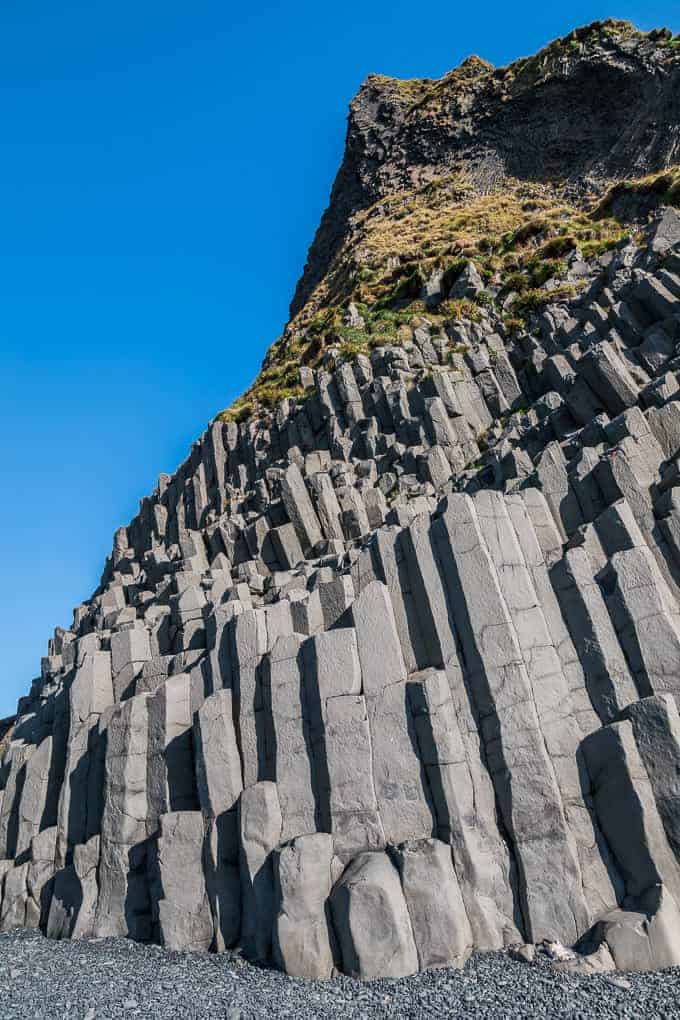 So I sat down on the beach to guard all the gear so he could start ascending the mountain behind us. And let me tell you what, that was one of the longest hours of my life! I’m not all that good with waiting, I like to be the one taking action, so just sitting there with all the gear was absolute torture.

And to make matters worse, the mountain he was climbing was really steep and grass covered in between cliffs. Which means a slight slip on a grassy slope could involve a slide to death. So knowing all that, I was pretty much a ball of stress, even knowing he’d be careful.

Finally the straw that broke the camels back so to speak, was a seriously rude tourist that kept buzzing just feet over my head with his drone! I mean… common sense tells you that with the slight twitch of the fingers, he’s going to crash his stupid drone right into you. And even as a photographer/videographer that loves to capture an area and to fly our drone, I totally get why they’re being outlawed everywhere.

I just wish there was some regulations regarding drone flights, like the way you have to take a test to get your drivers license. After he finally stopped buzzing around my head, (I gave hime the evil eye more than once, and would have given him a piece of my mind if I could’ve carried all the gear over to where he was standing) I actually watched him almost crash it into a couple as he tried to land it in the middle of a crowd of people. I mean… I can’t even sometimes. 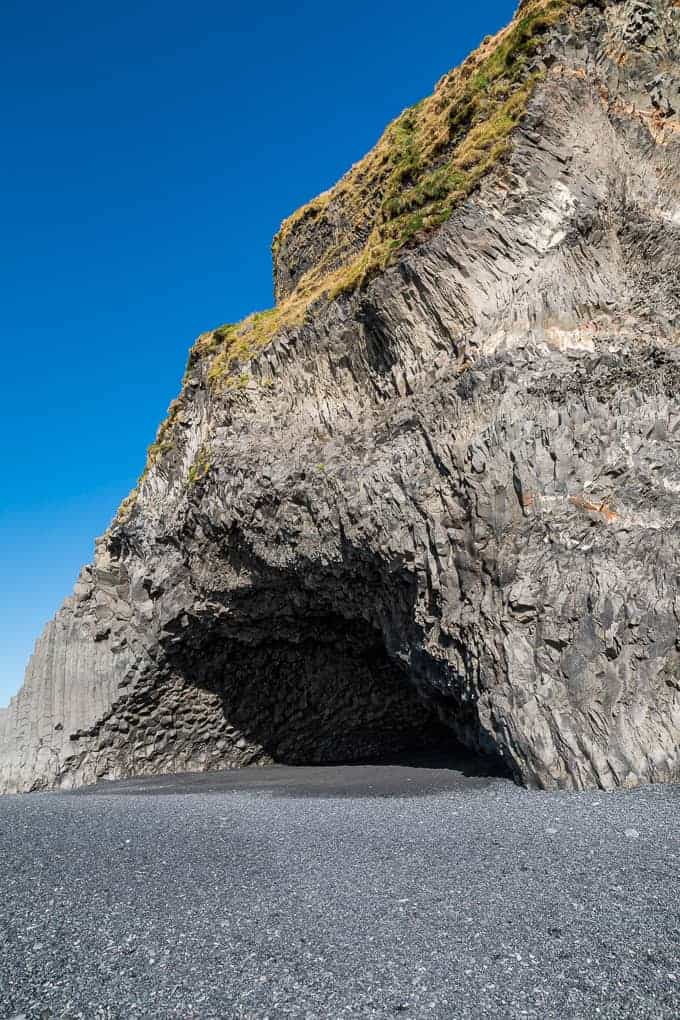 But getting back to our drone crash story, finally after an hour Tyler immerged beet red and drenched in sweat. As it would happen, the drone crashed near the very top of the mountain, (of course!). So he had tracked it down and climbed up and back down the mountain in just an hour, pretty impressive.

We still don’t know what happened, but we were lucky because not only did we recover the drone, but there wasn’t anything at all wrong with it, not even a broken propeller. Later once we got home, we found the video footage of the drone flight right before the crash, and it’s clear that Tyler was flying it well away from the mountain. But then when it went rouge, you can see it head right for the mountain. And then the mountain is right in your face right before you can watch it crash into the ground. 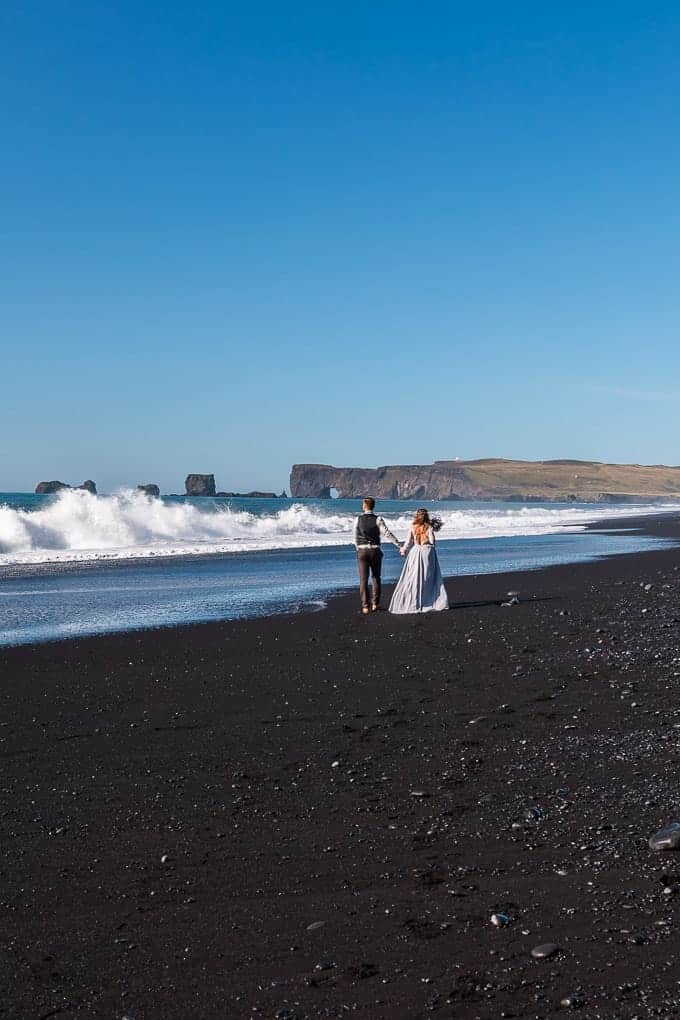 Unbelievably, after the crash it picks itself back up and hovers a bit before flying to the side and crashing again! Somehow it survived a double crash with nothing more than a few scratches. And I promise to get the video out on social media one of these days soon because it’s just too fun to watch it crash twice over.

Thankfully all’s well that ends well, and just a few minutes later we were back in the van enjoying a snack of Icelandic yogurt and making jokes. Then it was back on the road for more sight seeing because the day was only partway through! (To be continued next week with Day 6 in Iceland Part 2 Fjaðrárgljúfur Canyon.)