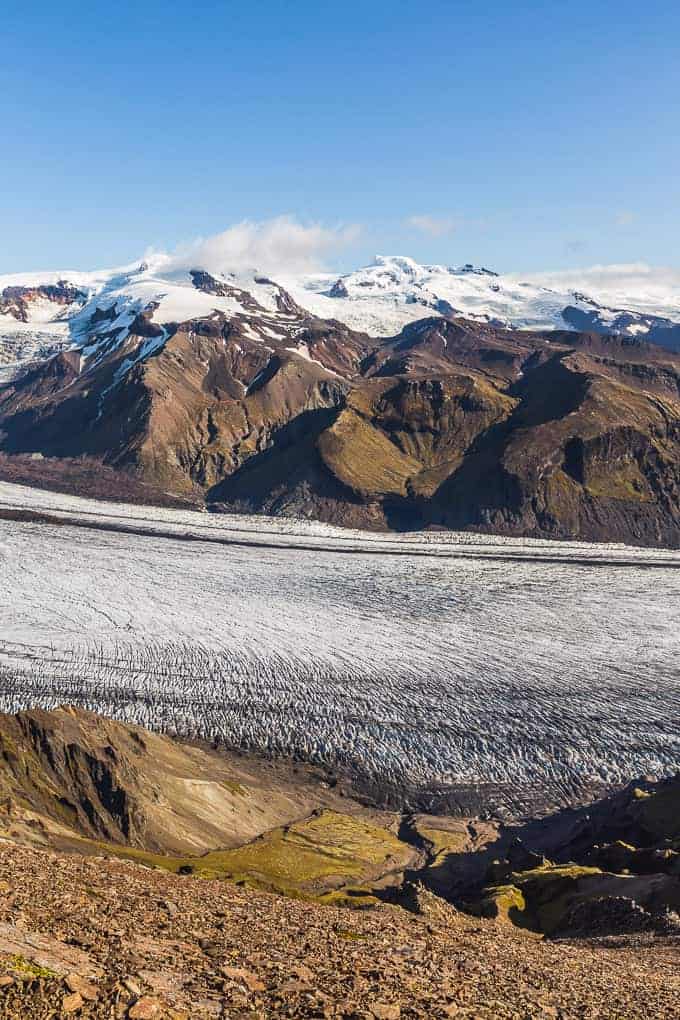 We last left off the night of Day 6 having finally found a place to sleep. Unfortunately the weather didn’t cooperate with our plans to make dinner, so we just went to sleep instead. The next morning dawned with beautiful weather, and the wind had finally calmed down.

We got up super early knowing we had a whole mountain to climb, and we wanted a good breakfast to get started with. But of course we wanted to start by making coffee first, so we dug out the stove and went to boil some water. For some reason it was taking forever, and we couldn’t figure out what was going on. But finally we had boiling water, and made a couple cups of coffee. 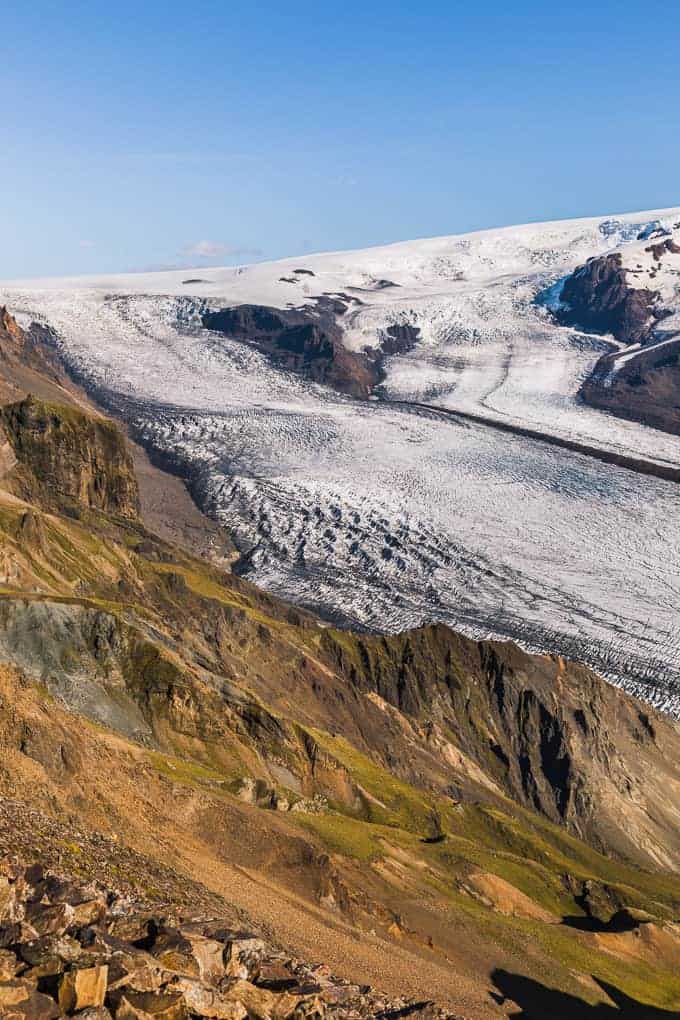 From there I dug bacon and eggs out of the cooler to make a breakfast skillet dish, with some Icelandic cheddar and green onions added on top. Since we were already famished from not having dinner the night before, we also broke out the last few bites of local blueberry yogurt.

But when we went to turn the stove back on, nothing happened! At first, we figured maybe we did something wrong, but when it still wouldn’t work, we started to worry all the bumpy back roads we’d been on had been too much for our stove. It didn’t initially occur to us we were simply out of fuel because we’d been told we had a full tank, and we’d barely turned the stove on. 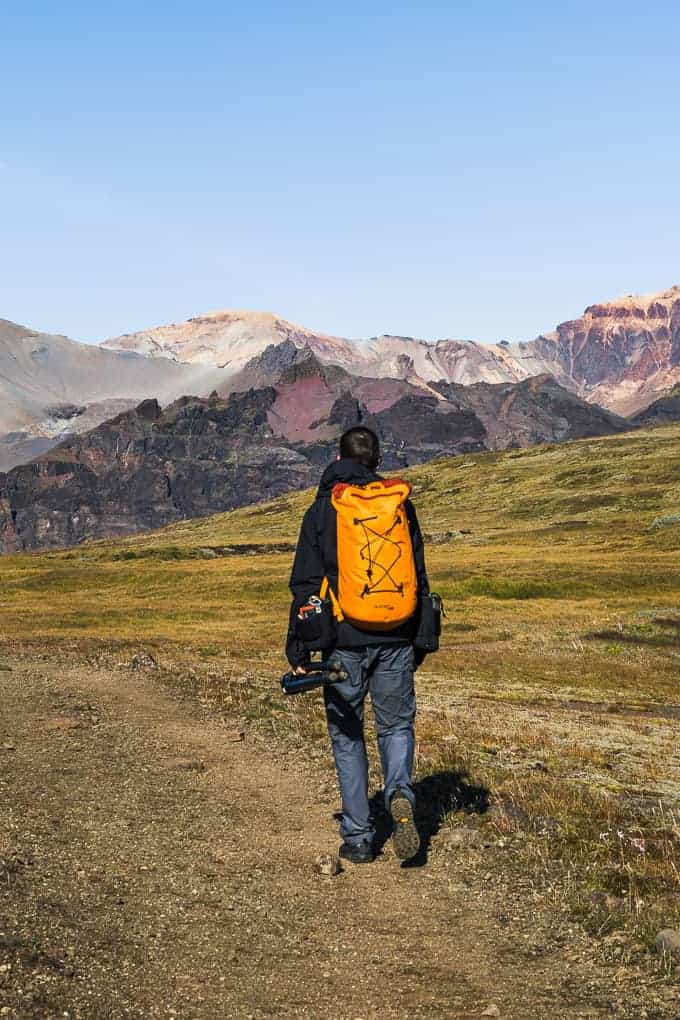 Since the fuel take was quite big, we never counted on being out of fuel. Turns out, we had started out on our trip with only about 1/4 of a tank. Go figure though… the rental company we used was terrible in so many ways I can’t even begin. I wouldn’t have cared if we didn’t have a full tank, I just would have wanted to know so we could prepare.

Anyways… there we were in the middle of nowhere without any way to cook breakfast. To add insult to injury, we’d already consumed all our snack foods, including the last couple bites of yogurt I mentioned above. What a terrible day to not have a good breakfast since we were planning on hiking from dawn till dusk. 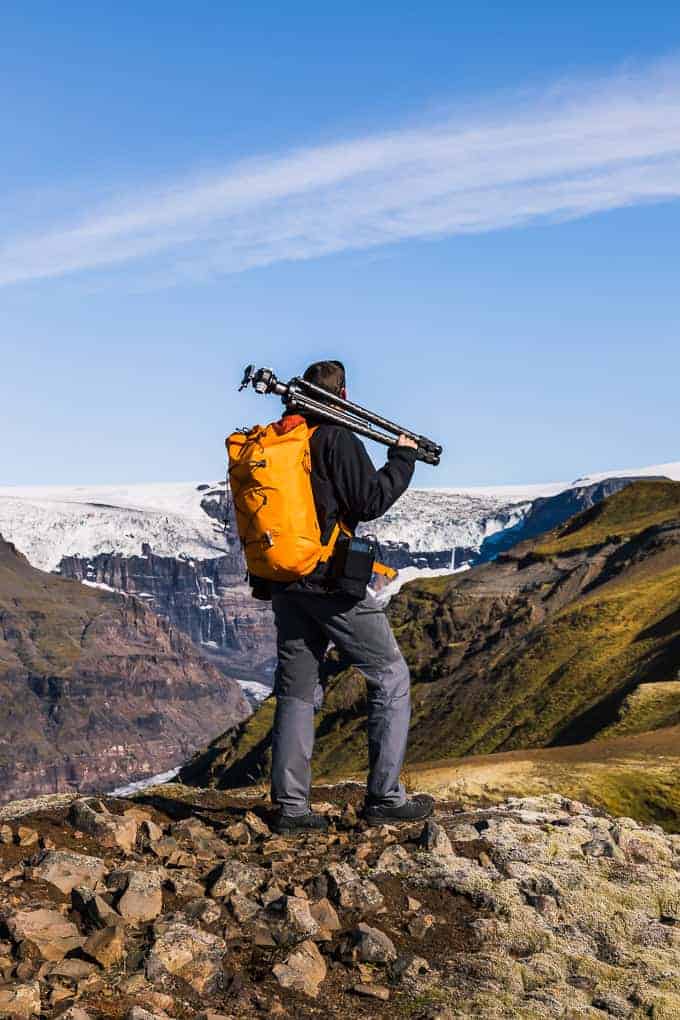 But not to be deterred in the slightest, we drank our coffee and got ready to start our hike. I put a few protein bars in our packs, and we got on the trail with empty stomachs, (not at all recommended). I should mention there’s a cafe as you drive into Skaftafell National Park as well as camping and great facilities. However we were getting an early start, so nothing was open. Obviously this is starting to turn into another one of those stories where I should mention not to follow in our footsteps! 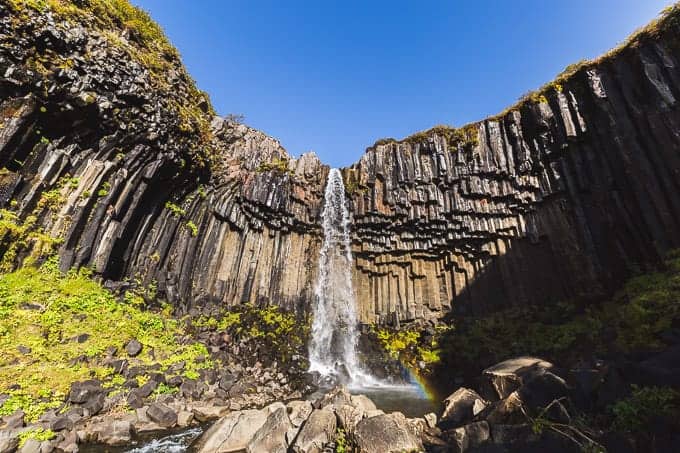 So we started off to climb Kristinartindar Peak, starting towards the famous Svartifoss waterfall, (pictured above). I had read a tip online saying to do the loop hike in that direction, and it’s fabulous advice for a couple of reasons. First off, this waterfall is popular which that means it’s insanely busy at times, so it’s best to visit early or late in the day. Although that brings me to point number 2, hike toward Svartifoss first because you’ll have the best light on the waterfall earlier in the day for photos. 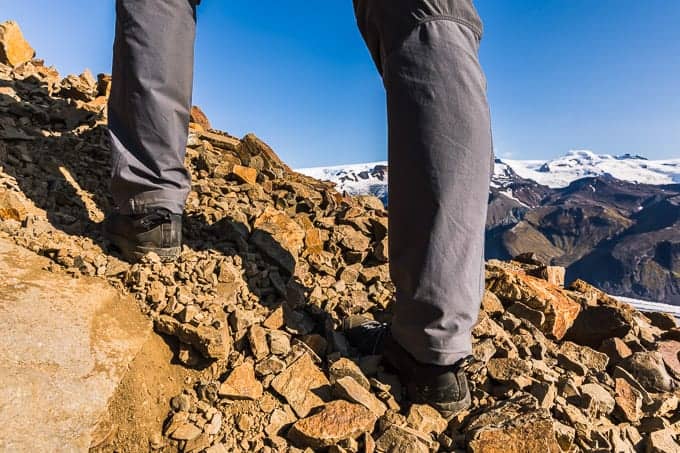 The temperature was actually quite pleasant, and we found ourselves overly warm for the first time since stepping foot in Iceland. But while we might not have had much food except power bars, we were overly prepared with plenty of water and warm layers. And let me tell you… you’re going to want some sort of wind protection as you work your way higher in elevation.

The wind picked up in the afternoon, and the gusty breeze coming off all these glaciers was predictably chilly. So we had a quick stop to layer up with our new favorite hats made from Iceland wool, and our rain jackets for a wind break. In all seriousness, the hats and gloves we bought on Day 5 as a souvenir quickly became our new favorites which we wore around the clock, (no exaggerating, we wore them to bed at night while camping). 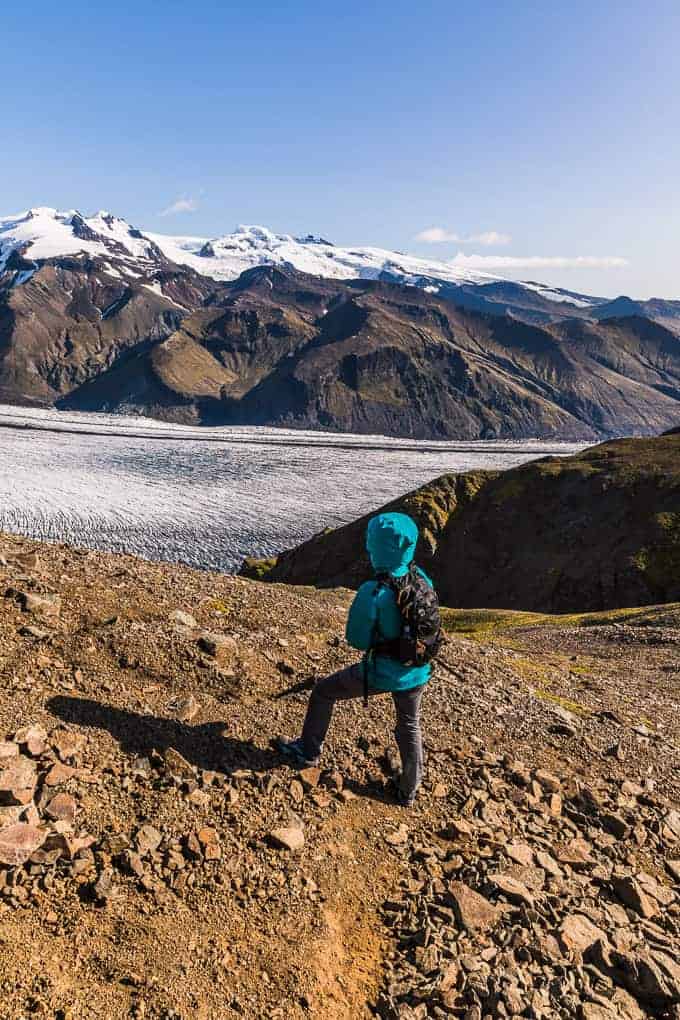 I should also mention to actually make it all the way to the top of Kristinartindar, you need to have some experience with route finding. Some knowledge of hands on scrambling would also help, along with having no fear of heights. If this doesn’t sound like a fun time, you can still hike the loop trail without scrambling the peak.

Once you hit the last little section of ridge, you’ll come across a register, (pictured below) where you can stop and sign before heading on to the main lookout point. From there it’s nothing but non-stop glaciers in every direction, and the views definitely defy description. So I just hope these photos will do this place some justice! 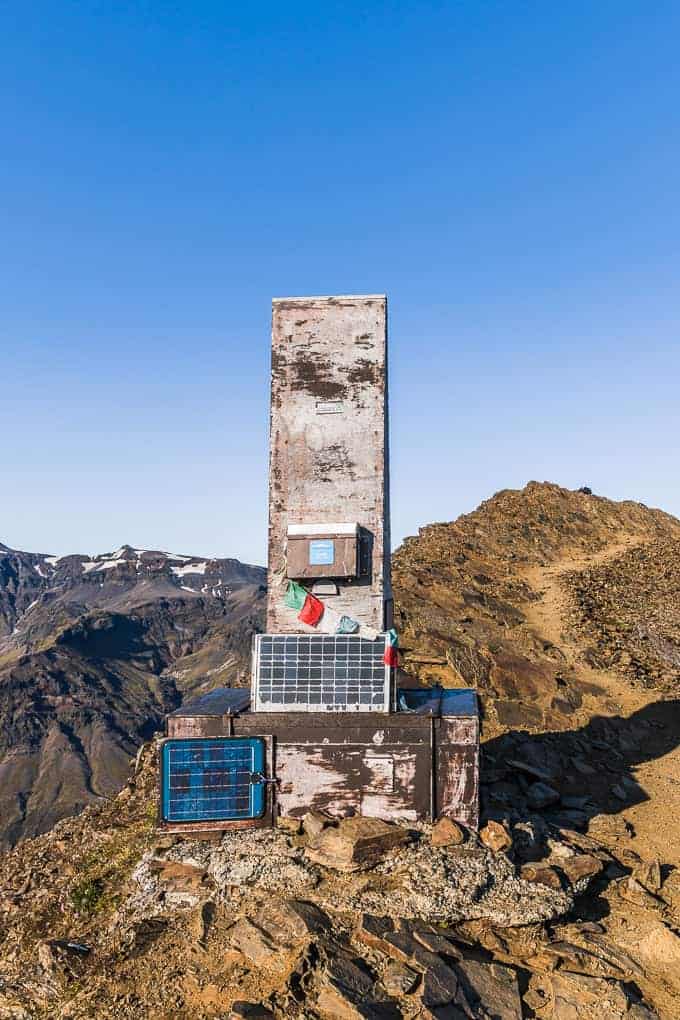 After spending way too long at the summit taking photos in every direction, we finally started to head back down. But as we were making our way back across the last stretch of the ridge, the wind suddenly died down. So we decided to quickly get the drone out to see if we could fly for a few minutes. But of course, no sooner did we have it in the air then the wind picked up again, and we made a hasty landing not a moment too soon.

On the way down, we made our way through the route finding part mostly on track. Except a small piece of the trail where we were so busy filming the scenery, we wandered away from the main trail, and had to make our way back. I thought I’d mention this, because it’s easy to get off trail if you’re not paying attention to where you’re going. Of course we were the only ones I saw doing this, so I’m hoping it was just camera distraction, but I thought I’d mention it anyways. At least this small diversion led us to a less windy spot where we stopped to have a power bar, (finally… some food!). 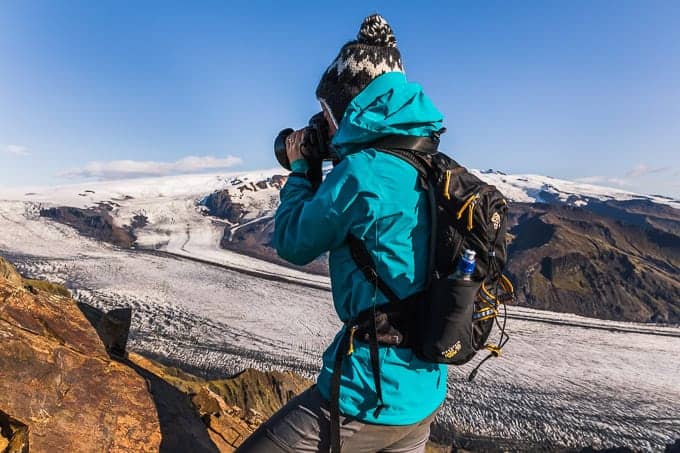 Once we got off the mountain and back onto the loop trail, the wind was much better and we took some more time out to fly the drone. And by now as you might imagine, the sun was starting to set. Knowing we had at least 4 miles to go, we packed up our camera equipment, and started booking it out of there.

Hiking Tip: Take a little time while you’re hiking sometime to figure out how many miles per hour you can do based off elevation gain and loss. That way when you’re out for the day, you know how much time you should allot yourself to do a hike start to finish. This is really helpful for not getting stuck coming out in the dark, when you bit off more than you can chew. Or if you just want to soak up the summit views/swim in a back country lake etc – knowing how much time you need to get back out is invaluable!

On our way down, as we were carefully picking our way through a muddy section of the trail, I found someone’s smart phone. It appeared to be working, so I cleaned it up and put it in my pack. We asked all the people we passed if it was their’s but to no avail. We figured we’d just drop it off back at the information center, but in our typical fashion, by the time we got back they were closed. But the cafe was still open for another 5 minutes, so we left it with them. 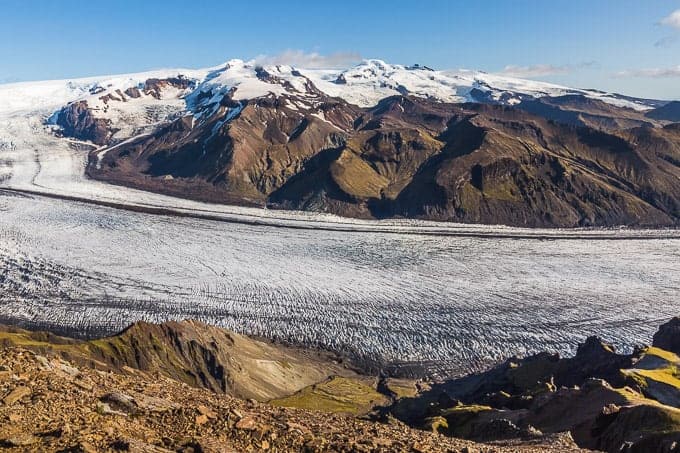 Even though the phone was locked, luckily the person had checked their email recently, and their email address came across the locked screen. So we sent them an email, and long story short, the girl who lost her phone on the mountain was absolutely frantic trying to find it. When she got my email she was still in the area, and absolutely stunned to find out her phone was within short walking distance of their campsite.

By the time we had the whole phone thing sorted out, it was definitely getting dark. And of course we were too late to buy anything to eat, or get to a grocery store. So we knew it was going to be another lean night. (I should mention too, they keep more normal hours in Iceland, and I never saw anything open 24hrs a day like it is here in the States.)

Although it wasn’t our worst night without much food, because we still had a little bit of gouda cheese left in the cooler. So with our remaining cheese in hand, we got on the road to head for the famous Jokulsarlon, (glacier lagoon) hoping we’d be in time for the aurora to come out. 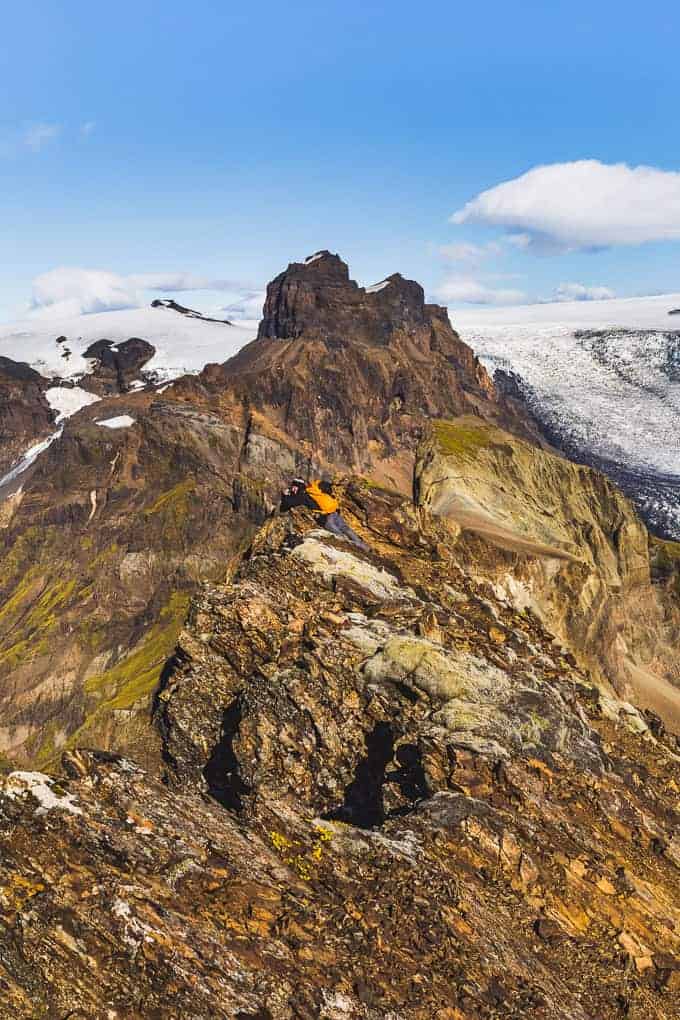 However we barely made it a half mile down the road before we noticed the green glow coming across the sky. It wasn’t really dark enough to see the aurora well, but we stopped anyways to take a quick photo of the aurora beginning to dance over the top of the peak we’d been standing on just hours before. 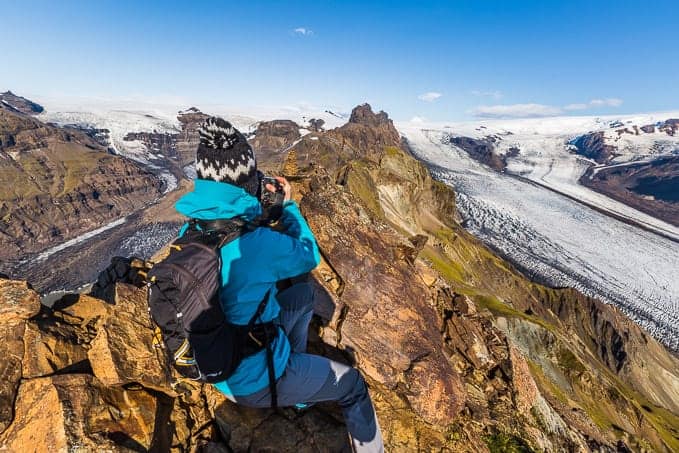 Then we finally got serious about getting to our next location. And here’s where I’d like to drop a warning about Icelandic sheep – they tend to like to cross the road in herds, and when they do, they won’t necessarily get out of the way. We had a herd of them run in front of the van just a few miles into our drive this night, and we laid serious rubber on the road not to get in a wreck. 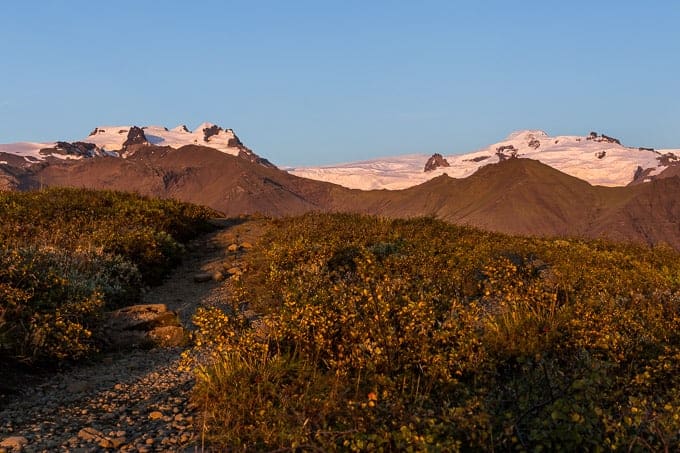 They came out of nowhere even though we were watching for animals. And once they were on the road, they just stopped to hang out inches in front of our bumper, like nothing at all just happened. Slowly we made our way through the herd by blaring the horn, and inching forward. Living in Montana, we’re not strangers to game, (mostly deer) on the road, but sheep were a whole new experience because they don’t seem to care you’re there, or feel the need to move off the road. 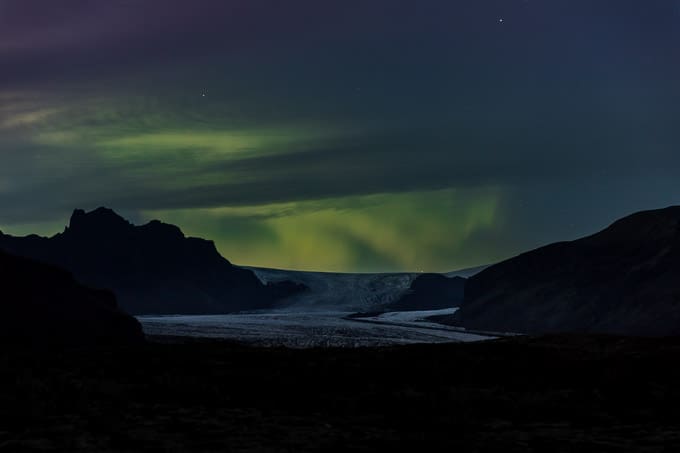 (This photo was taken on the road leading out of Skaftafell National Park, and we were standing on the top of the peak on the left hand side of the photo. The glacier you see spilling out is the same one you can see in the first 2 photos from the summit.)

What with one distraction and another, it took us a couple hours to make the 1 hour drive to Jokulsarlon. And I should mention there’s no camping right at the lagoon, but we weren’t planning on sleeping. When we got there, we were absolutely stunned by the sheer amount of photographers running around in the middle of the night. I guess we naively thought we’d have the place to ourselves, but not even close. Even so I think you’ll agree it was still worth trying to get a few photos which will be coming on Day 8.