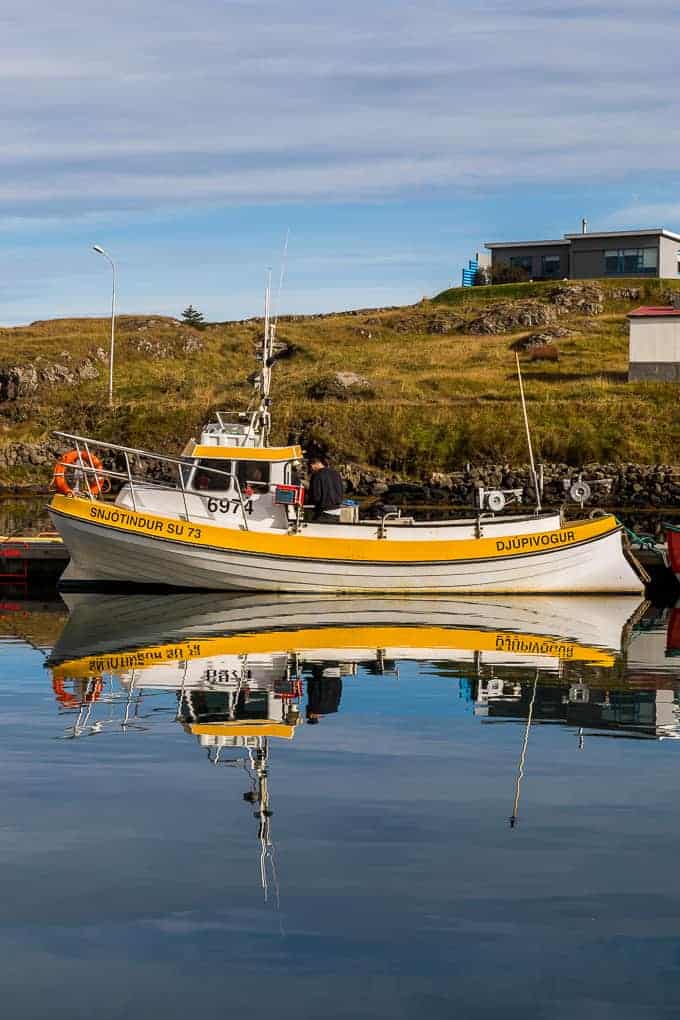 Following on the action packed heels of Day 8 Part 1 & Part 2, we decided to take Day 9 a little more slowly. This decision to slow down was also out of necessity because we needed to off load all our camera cards on to a external hard drive. It’s hard to find any time to keep up with the sheer amount of photos we take on vacation, especially when it seems like we’re always going full tilt from dawn until the next dawn at times. 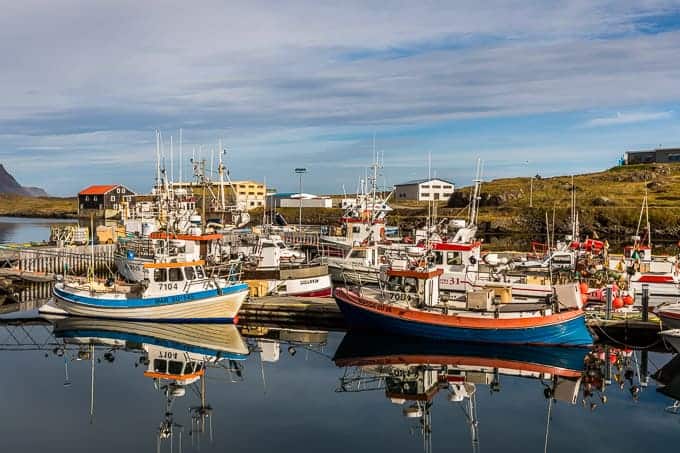 So we had a slow morning taking care of photos and having a few cups of coffee, (pictured below) before getting on the road again. First up we headed to the picturesque fishing village called Djupivogur to fuel up and stock up on supplies again. We also wandered around for a bit taking pictures because it was just too gorgeous, before heading out again.

Along the way to our main destination, we pulled off the road several times to take pictures of the the breathtaking coast, (photos below). From there we knew we wanted to head to a lesser known waterfall called Fossardalur. So off we went never guessing what was in store for the day. We had only the vaguest of directions, so we made the turn onto the right road, and proceeded up one of the gravel roads, which eventually turns into an F-road. 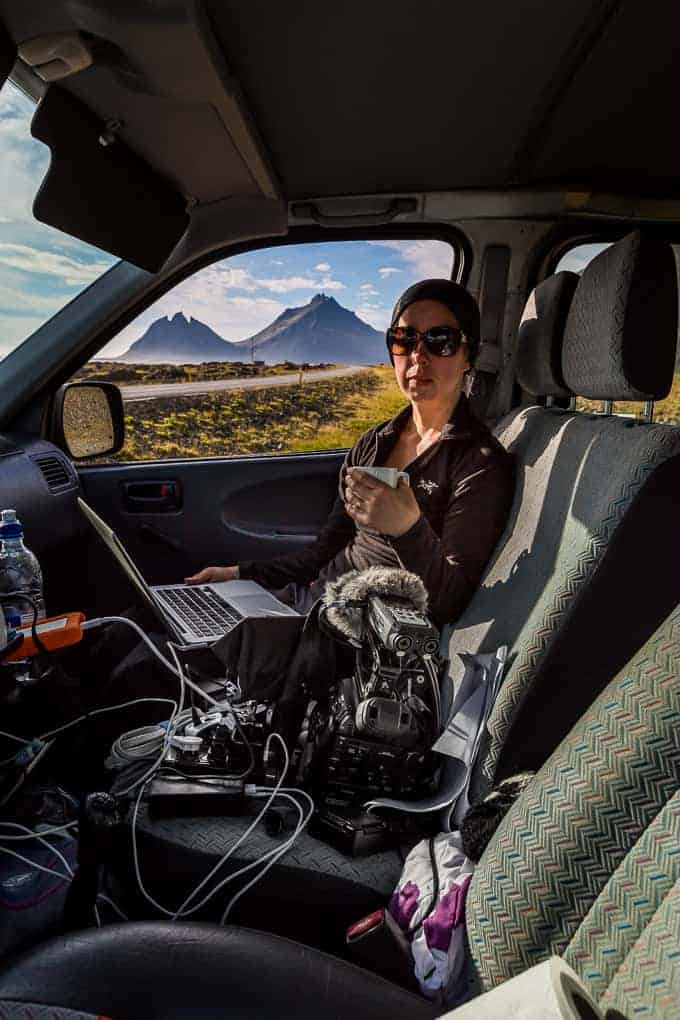 Laptop Charging Tip: We bought an inverter before we left for Iceland with the intent we could charge our laptop on the road by using the wiring cables to hook directly to the battery on our rental vehicle. This ended up working perfectly, although obviously you have to be parked with the vehicle running to be charging.

Most every morning and night, we’d hook up the jumper cables for the inverter to the battery, (with the van running – this is critical, or you’ll find yourself stranded with a dead battery). We’d charge while off loading the photos we took, then shut down the laptop and unplug the inverter. This was absolutely invaluable for us because we never had to slow down to charge at a cafe during the day.

You wouldn’t need to worry about this so much if you’re staying in a hotel. And this pretty much only applies to certain laptops, especially Apple which is so difficult to charge on the go. Something about the way they’re made means you can’t simply draw power off a cigarette lighter inside the vehicle, and we haven’t found any other way of charging our laptop on the go. In fact we blew a lot of fuses in our truck trying to figure this little problem out before we left for Iceland. I’ll be writing a full post with all our tips from our trip, but I wanted to include this one for now. 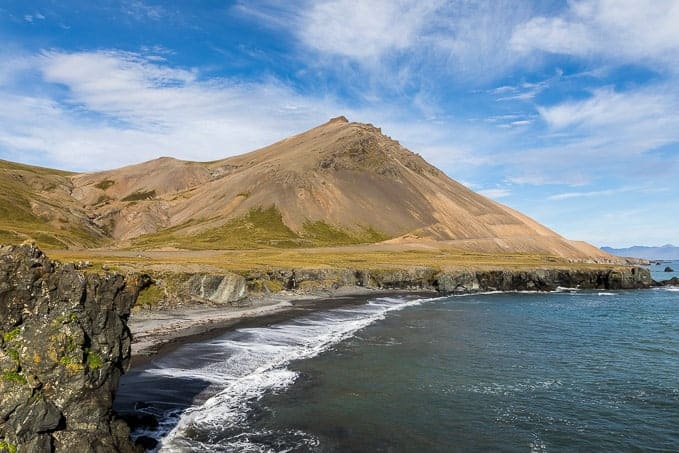 From what I can tell after coming home, we must have passed the waterfall which some sources say is right off the main ring road. Of course we’ll never know because by the time we were heading back out it was getting dark, so we couldn’t investigate. But anyways, we blithely proceed up the road which was progressively getting worse and worse. We weren’t worried however because we had rented just the vehicle for this task.

After quite a while of bumping along, we came to a herd of sheep crossing the road. While this was a sign of the afternoon to come, we didn’t know anything was amiss because seeing sheep is pretty normal in Iceland. As it would happen, there was a sheep heading going on that we had stumbled right in the middle of. 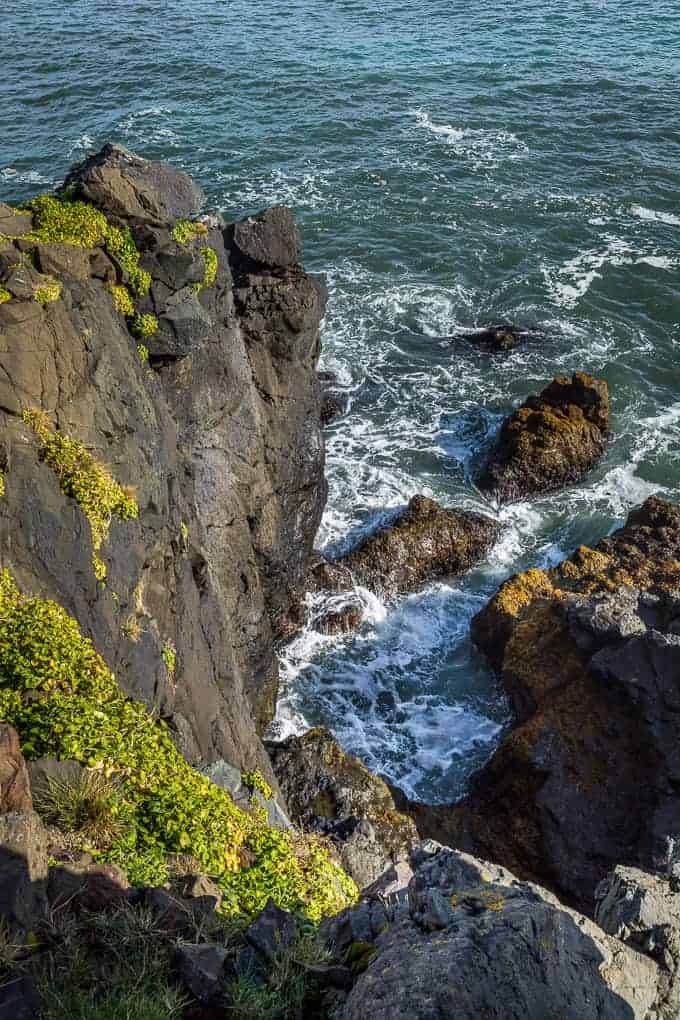 Up ahead there was a vehicle clearly blocking the road on purpose, so I hiked up on foot to talk with the woman in the vehicle. And that’s of course when we learned about the sheep herding. She forcefully informed me they were using the public road to bring their sheep from pasture into the barn for the winter and we couldn’t proceed.

Now I definitely understand about ranching by all means because some of my best friends grew up on a ranch. What puzzled me was shutting down the public road, but we decided we didn’t want to wait 3-4 hours to proceed and just cut out losses and move on. 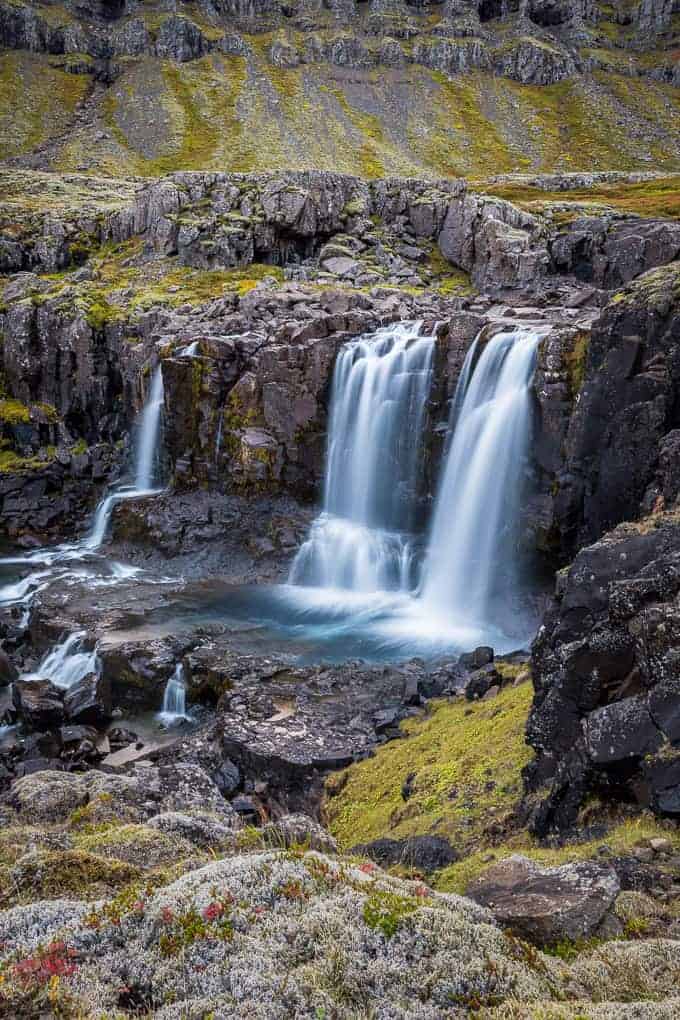 And here’s where things get even more bizzare, as we were making out way back down the road, the woman’s husband came tearing across the pasture in his Toyota truck and parked right in front of us on the road penning us in. He informed us we were not to move for the next several hours while they finished. I mean… what in the world!?! Like I said I come from a ranching state, (Montana) but if you’re going to shut down the public roads, then don’t let anyone in, to then be stuck for hours.

I totally get they didn’t want us disrupting any part of the herding process, but I’m still confused by why they didn’t simply block off the road. We definitely weren’t the only vehicle that ended up stuck, and I really can’t complain because some were there many more hours than we were. But also from our perspective, we hadn’t done anything wrong and shouldn’t have been detained for most of a day. For us, this was a trip of a lifetime, and who wants to spend it sitting on the side of the road? 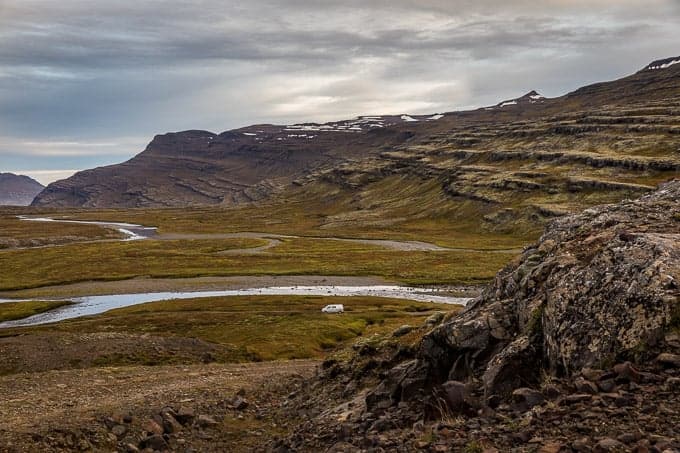 But since we didn’t have much of a choice, we decided to break out the camp stove and make dinner. We decided to do another version of boxed mac and cheese, adding in some Icelandic butter, cheddar, bacon bits, diced tomatoes and green onion. It was delicious to have a full homemade meal at a decent time after all the days of going without.

After we finished dinner and cleanup, we still had lots of time, so we tore apart the whole van and did some reorganizing. And when it was getting close to sunset, we were finally allowed to leave. But since the day was almost over now, we decided to head back up the road to see if we couldn’t find this elusive waterfall. 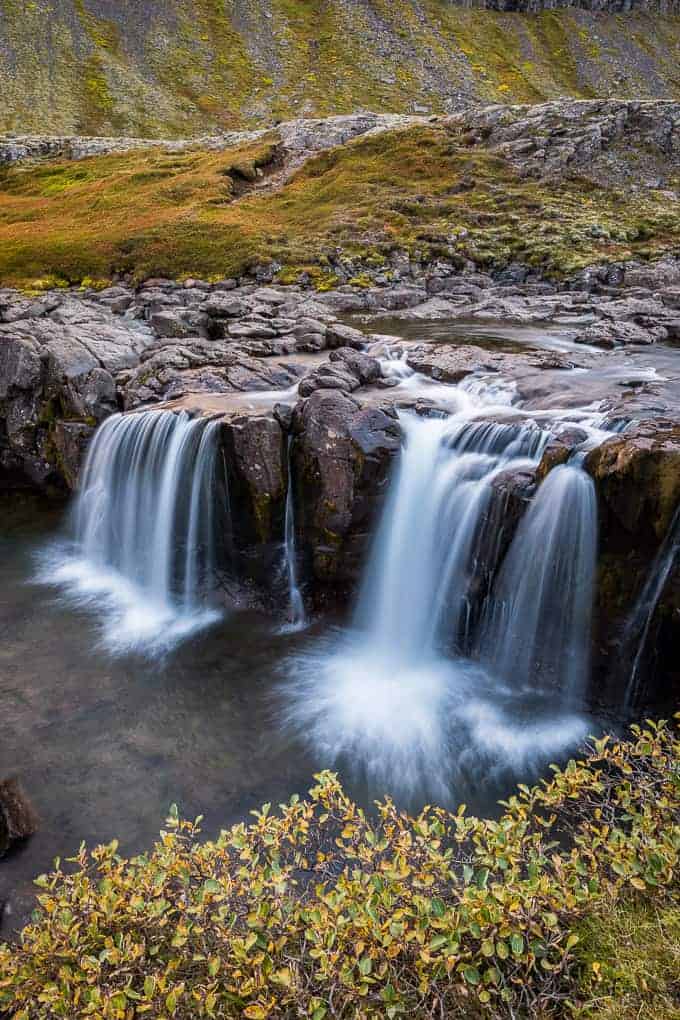 So we drove, and we drove some more, taking some pictures along the way. We saw countless small waterfalls, but I knew they weren’t the one we were looking for. Finally as the sun was setting we reached our stopping point when the van simply wouldn’t make it up one particularly steep hill. I remember doing a Insta Story hanging out the window as we were driving up and saying, ‘I sure hope we don’t stall out on this hill’. 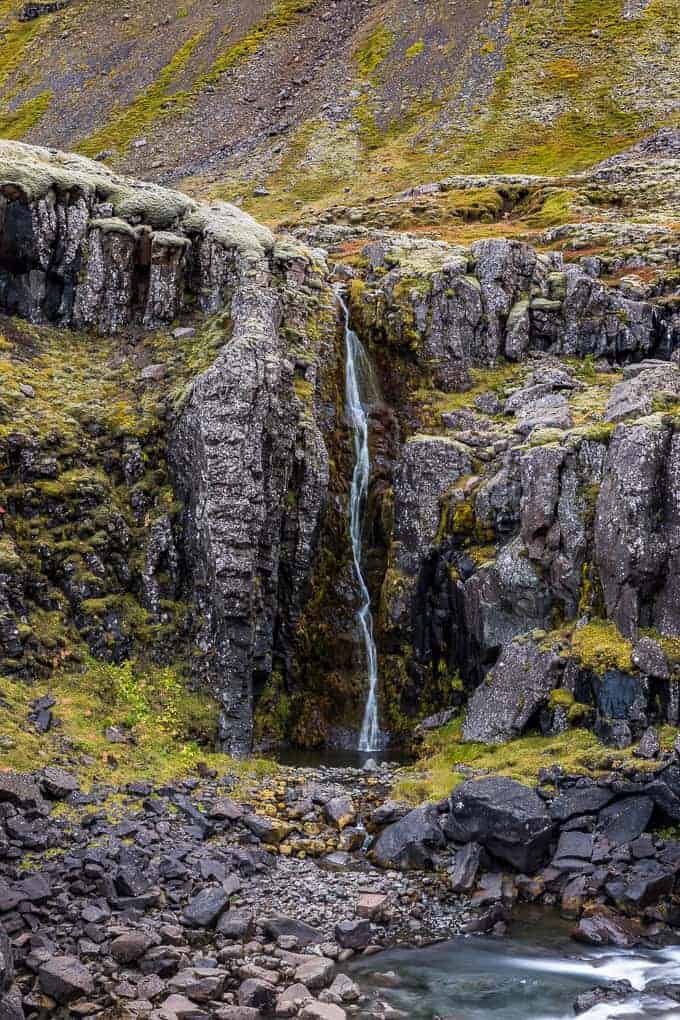 Moments later that’s exactly what happened, we stalled out and had to back down that skinny road with steep drop offs on either side. I did another quick Insta Story of us backing back down before I had to stop filming and concentrate on giving Tyler directions from my side of the vehicle so we didn’t go over the edge, (you can’t see too well backing up in some of those vans). 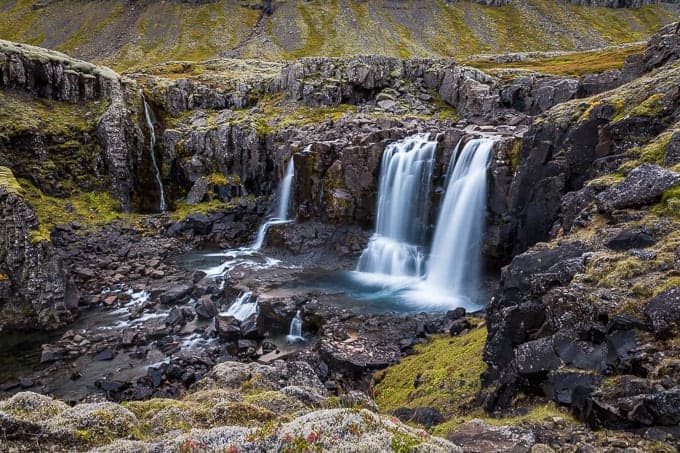 As we were driving back out, we stopped at some of the waterfalls we could see from the road to take the pictures you see here. For such a crazy day, I wasn’t even disappointed because we saw so much amazing scenery, and it was nice to be off the beaten track again for the day.

When we finally reached where the gravel met the blacktop, we realized the waterfall we were looking for had been right there all along. We had somehow missed it on our way up in the morning. But in any case we pulled into the parking lot, and got the camera gear out. There was just one other vehicle in the lot, and the man with it came over to ask us what on earth we were going to take a picture of. He made the comment that ‘your camera would need to see in the dark’ to get a photo. 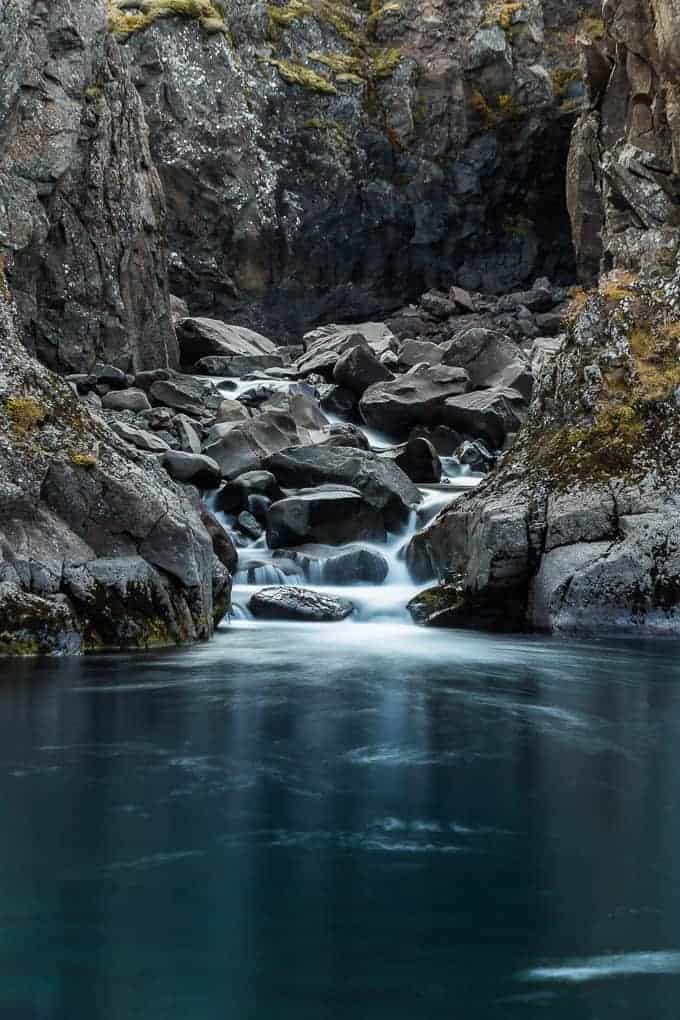 But luckily for us, both our cameras do pretty much see in the dark and we headed out to take the above photo. It was so black out by now, we needed headlamps to even take a step, but after setting the camera and tripod up, we came away with a few shots of the bottom of the ‘real’ waterfall. We didn’t feel safe heading up to explore the higher part of it as it was quite cliffy in that area and we didn’t want to take a fatal fall.

So we packed up and started heading to what was supposed to be our afternoon – you know… with the assumption we had that we wouldn’t be spending the day sitting on the side of the road. As we headed around the ring road towards the East Fjords a wicked rain storm came up, and the driving was fairly slow after that. However the weather favored us as we took a shortcut leading out of the fjords, and we finally found a place to sleep where we knew we could get up early the next day to do a time lapse. Continued on Day 10.

2 thoughts on “Day 9 in Iceland Djupivogur and Fossardalur Valley”