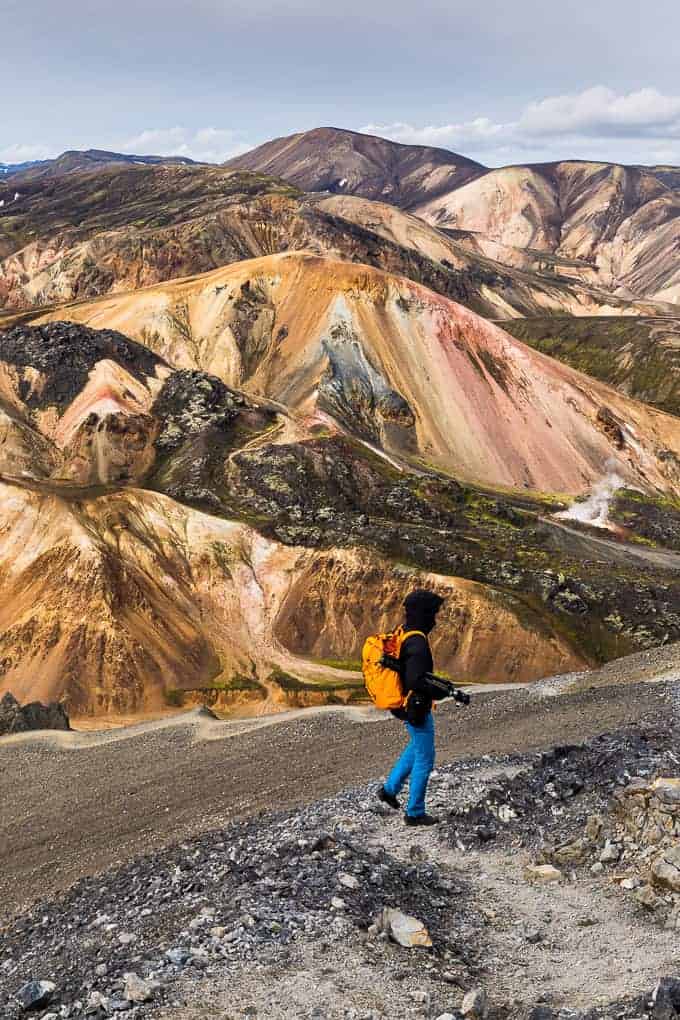 Our time in Iceland started out better than we could’ve ever dreamed! In fact over the course of the first couple of days, we kept saying ‘I don’t think it can get any better than this’. But of course, Iceland didn’t disappoint as you’ll see!

We started the trip off predictably with almost no sleep in two days. But eager to start sight seeing, we took our rental vehicle straight to the grocery store to stock up. Then… we headed into the highlands where I left a piece of my heart.

Our first excursion into the highlands was on F208 into Landmannalaugar. There’s only one (usually small) river crossing, so we figured it would be a good place to feel out what off-roading in Iceland would be like.

For us it was rough, I mean literally rough because our rental vehicle had lost it’s suspension a decade or two ago. We pulled over several times to let other people cruise right on past us. So it’s hard to tell just how long it takes to get in there, but I’m guessing for most people 2-3 hours. Where for us it took 4+ hours of bumpy roads so bad that our 50 pound suitcases of gear were bouncing of the floor every time we hit another hard bump.

We had originally rented a Toyota Hilux to be off-roading with. But someone crashed it the day before we got there, so we ended up with an old Toyota Hiace van that had seen better days. Despite all it’s many… many faults, it got us into most places we wanted to go, so no complaints considering! 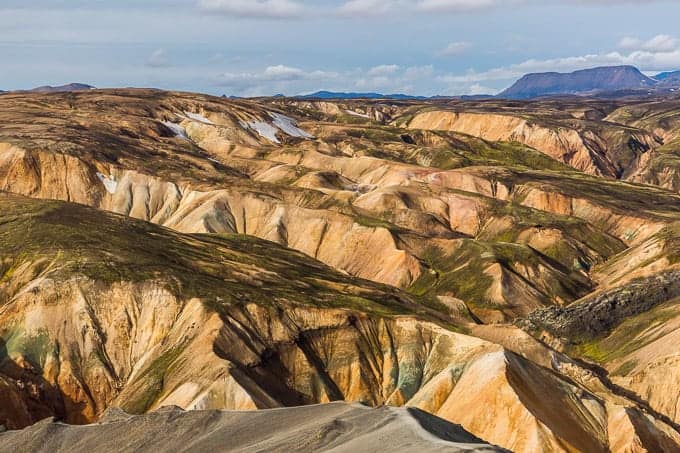 So after 4 hours of mind numbing, body aching, rough driving into the highlands, we arrived in Landmannalaugar. At this point we had been awake just over 44 hours with only a short catnap on the plane.

We decided not to do our first river crossing in the dark, and parked in the parking lot about 1/2 mile from the huts. Which brings me to another point, if for some reason the river is running too fast and hard when you get there, you can leave your car in the parking lot, and take a footbridge in about another 1/2 mile or so.

At this point we were obviously exhausted, and I should mention we hadn’t had breakfast, lunch, or dinner – just a power bar. This is a pattern I’m afraid to say continued throughout our trip. We’d just get so excited with what we were seeing and photographing, that a whole day would go by without eating much. 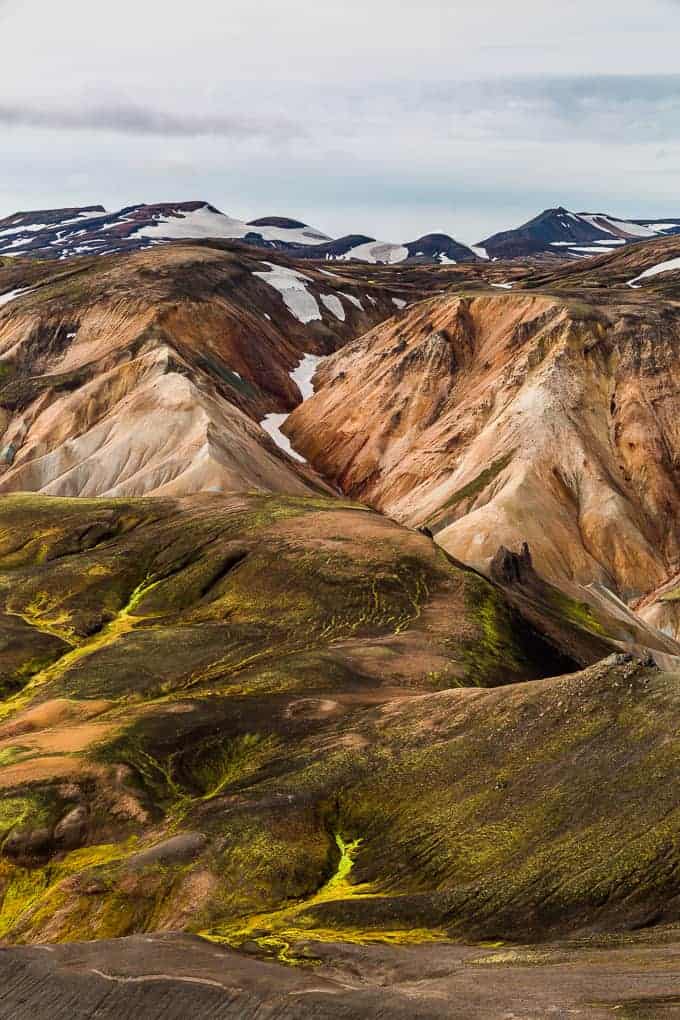 With all that in mind, you’d think we’d make the obvious choice and go to bed since we needed to be up early the next morning to climb a mountain. But we decided instead to hike a 1/2 mile in to soak in the hot river and forgo dinner and some sleep. However questionable that decision might seem, it turned out to be one of the best nights of our life!

After hiking in, we stripped off our warm down coats in the below freezing temps, and sank into the hot river with some other backpackers. (As a side note, there’s a backpacking route that runs through here, and I can’t think of a better place to overnight in the backcountry.)

We moved around until we found a spot that was ‘hot tub’ hot, and settled in for a nice long soak. Not long after we got in, the whole sky broke out with beautiful aurora that arched across the sky from 1 end to the other. Gasps of delight surrounded us and filled our ears as we sat in the hot water looking up into the sky with wonder.

Tyler asked me if we should run back and get the camera, but I said no because it could disappear any moment. And sure enough within 20 minutes it was gone, making us both glad we hadn’t tried to run a mile to get the shot, and just sat there to enjoy the show. 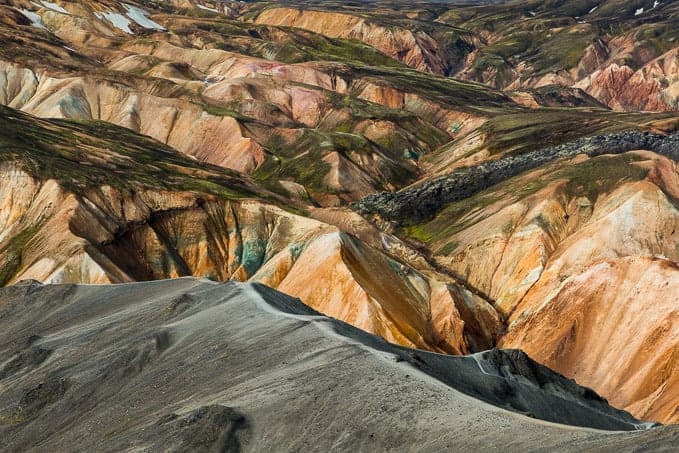 After the aurora was over we continued to soak until we both started to feel human again. And finally in the wee hours of the morning, we got out onto the icy boardwalk and struggled to dry off enough in the steam to put our clothes back on.

There’s something incredibly invigorating about experiencing those kinds of extremes. And nothing makes you feel more alive than going from hot to cold like that. Envision bouncing up and down on the frosty walkway, hoping your feet wouldn’t stick before you could get them back into your boots.

Then we walked back to the van holding hands under the stars. Just kidding… the holding hands bit didn’t last very long because it was below freezing and we ended up jogging back to keep warm. All in all, we both look back on the experience as one of the best nights of our life! 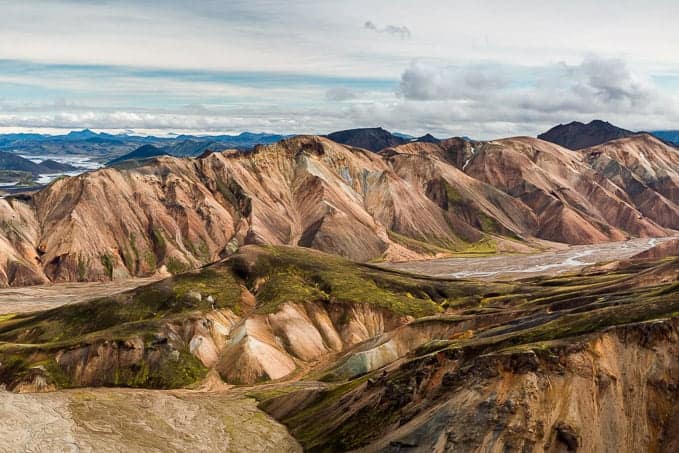 Once we got back to the van, we dug out every blanket available, and put on our down coats and hats to go to bed. We really should’ve put on every layer we had, but we didn’t know how lacking the blankets were yet. So thinking we had all our bases covered, we set the alarm for 4:30am, just a couple hours away, and finally went off to sleep.

When the alarm went off the next morning, it kinda felt like being hit in the head, having gone so many days with mere hours or even minutes of sleep. But we were both glad to be up, because upon waking we discovered both our feet had gone numb and stiff in the couple hours we had slept. We needed to get moving right away to get the blood moving again. After that super cold night, we never slept again without every single layer on to guard against the cold. 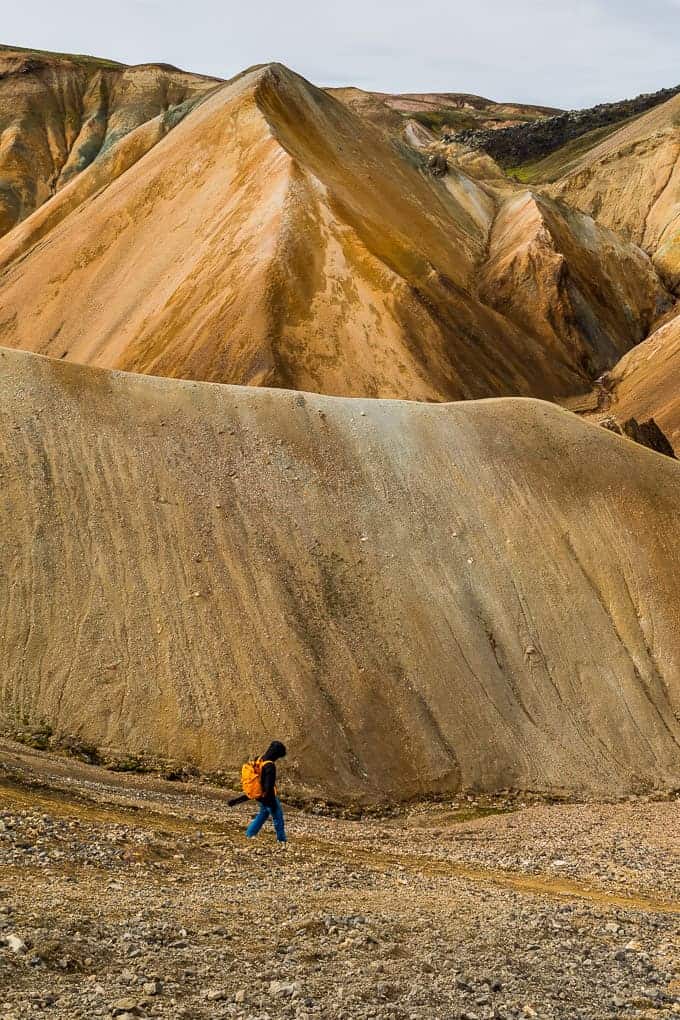 For breakfast we had our first taste of Icelandic yogurt, and I really can’t rave enough about how unbelievable it is! We had plain yogurt mixed with this fruit sweetened raspberry jam, and my Maple Cinnamon Granola to round off the bowl.

Then we packed up our gear and headed off at dawn to hike Bláhnjúkur, otherwise known as Blue Mountain in English. It’s a fairly short and easy trail to the top, although it is steep. The views as you can see are nothing short of jaw-dropping. The loop back down the other side that returns to the campsite would normally take between 3-5 hours total. But since we stop every 2 seconds for photos, it took us all day long. We probably would’ve spent even more time, but there was a storm rolling in. So we ended up booking it out of there towards the end of the hike.

Having been out and about all day, we were positively famished by the time we got back to the van. So we got out the cooking stove and decided to make boxed mac and cheese for the ultimate easy meal. In fact we were so hungry, we decided to cook 2 boxes for the 2 of us which turned out to be a good idea. 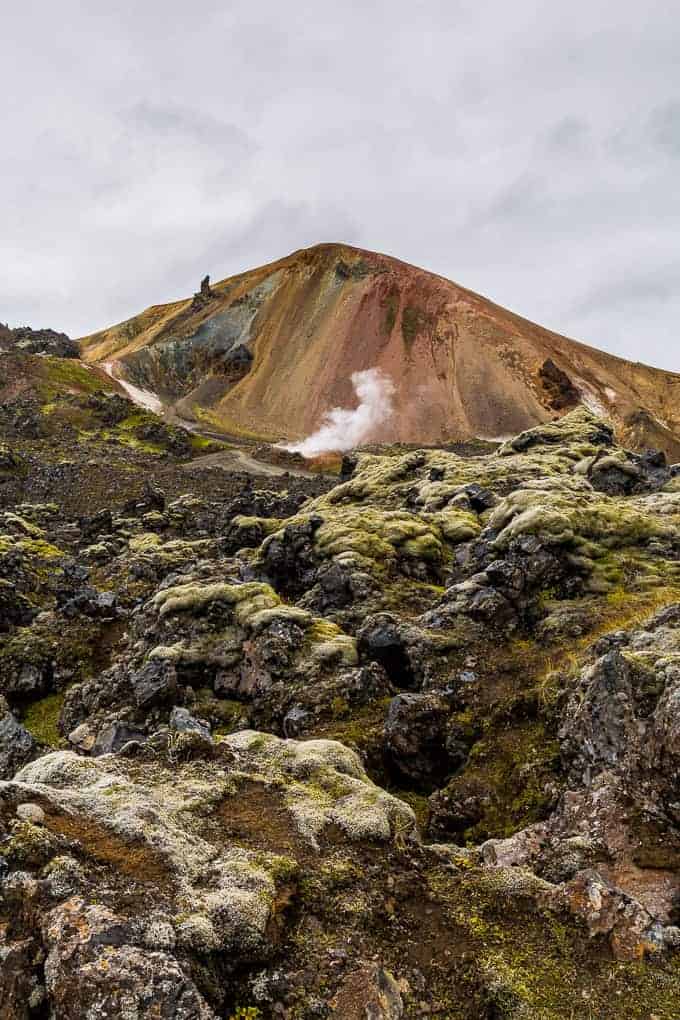 Right after we got the stove set up, the rain storm started in. So we geared up with head to toe gortex, and continued on with making dinner. When the pasta was done, I sent Tyler off to drain it at the sinks. I probably should’ve given some more instructions about how difficult it can be to drain pasta in camp cooking pots. But it never occurred to me in my sleep deprived state, and he accidentally dumped half our dinner into the sink when the lid slipped.

Not to be deterred, we finished off what we had left in the pan, and finally sat down to eat. The food was gone in about 2 seconds, and we were both still hungry. But since the rain was sleeting down by this point, we had to settle with a few spoonfuls of yogurt to tide us over until the next day. 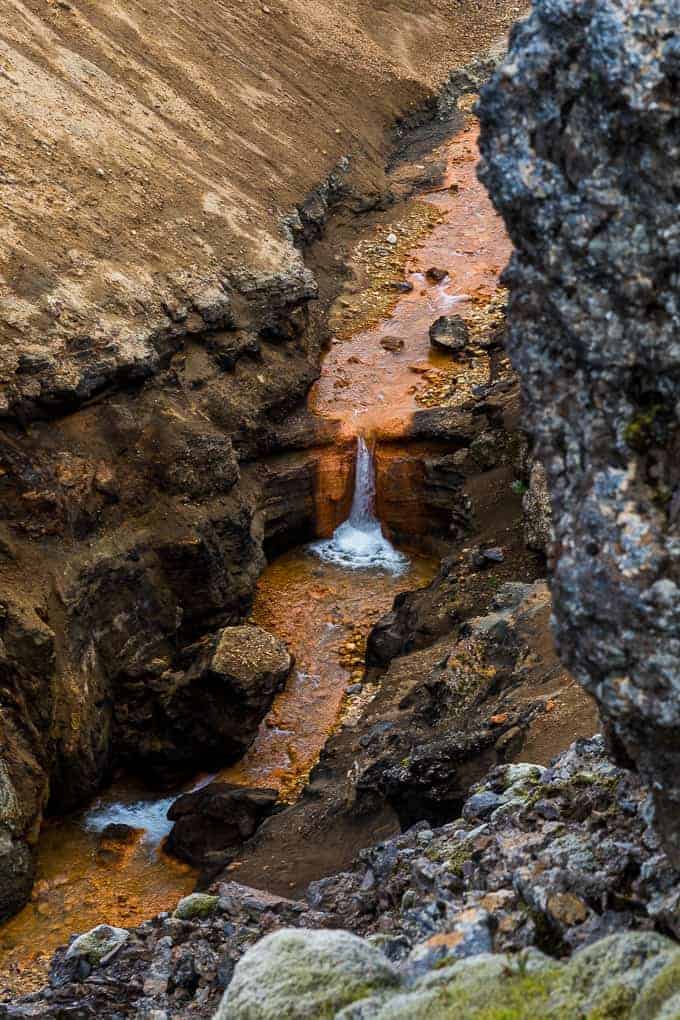 Things rarely go as planned when you’re on a trip or camping, so luckily I had brought lots of power bars for emergency food situations like this. Those power bars turned out to be more valuable than I had ever imagined because our food problems were far from over as you’ll see in the coming days of our trip! 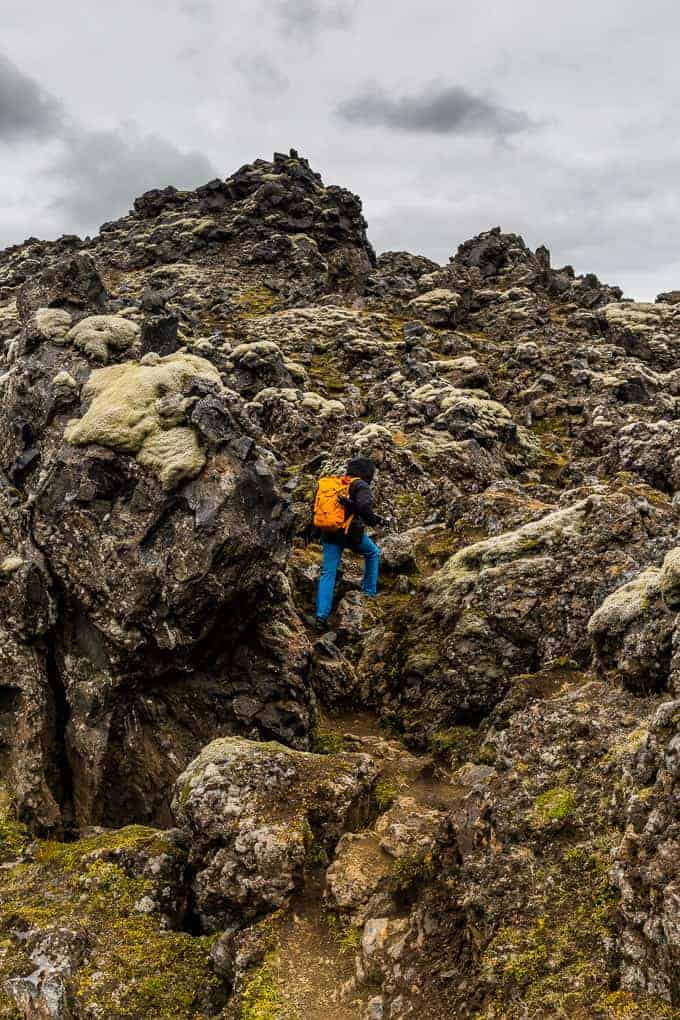 A few tips for Landmannalaugar:

I sure hope you enjoyed this story form of our first 2 days in Iceland, which is the beginning of our series. Over the next few months, I’ll be chronicling the remaining 13 days with the sites we saw and food we made. Be sure and let me know if you have any questions, and I’d be happy to try and help!

Continue the story with Day 3 Porsmork.

6 thoughts on “Days 1 & 2 Landmannalaugar in Iceland”