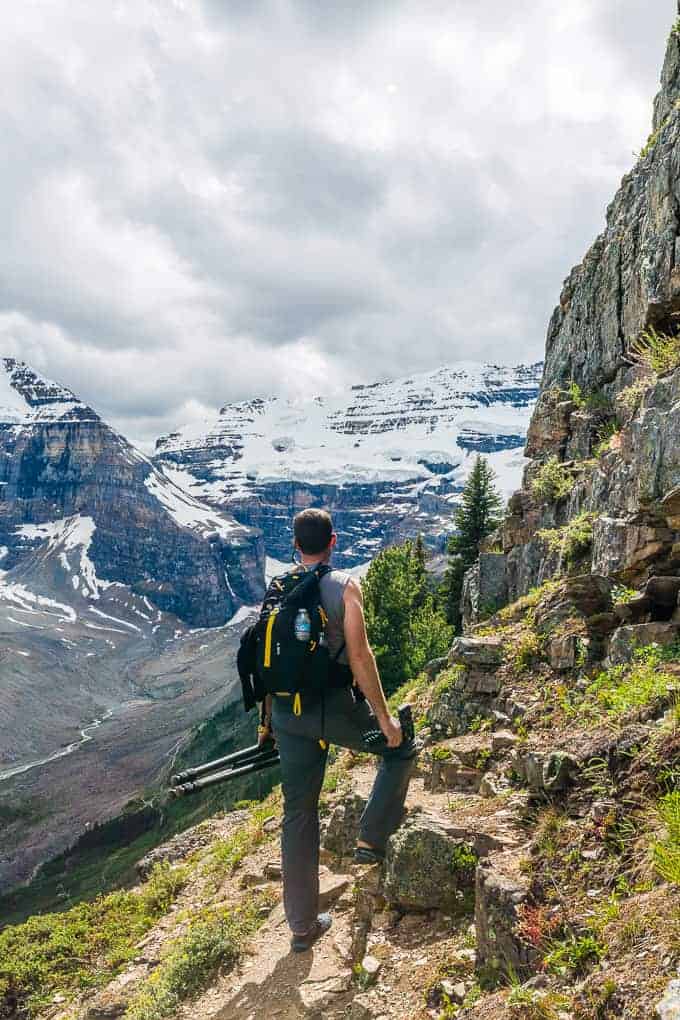 The Devil’s Thumb Scramble starts from the popular hike to the beehive above the Lake Agnes Teahouse in Banff National Park. There are several phenomenal hikes you can do in this area, and all of them offer great views. The first time we spent some time in Banff we did both the Plain of Six Glaciers Teahouse and the Lake Agnes Teahouse hike on separate days. What we didn’t know is there’s a trail that connects the 2 hikes called the Highline Trail.

The Devil’s Thumb Scramble takes off from the highline trail as a side adventure if you’re into hand’s on hiking with a small amount of climbing. The Highline Trail makes it possible to make a loop of the two teahouses, and hike them in one day, with a side addition of Devil’s Thumb if you’re full of energy.

You can start either way, but we wanted to photograph the Plain of Six Glaciers in the early morning light. The trail winds you around Lake Louise and up into the basin of glaciers you see from the Chateau Lake Louise. On your way back down from the lookout which overlooks all six glaciers, you’ll want to watch for where the Highline Trail breaks off. This stretch will climb all the way up to the beehive which overlooks both Lake Agnes and Lake Louise. 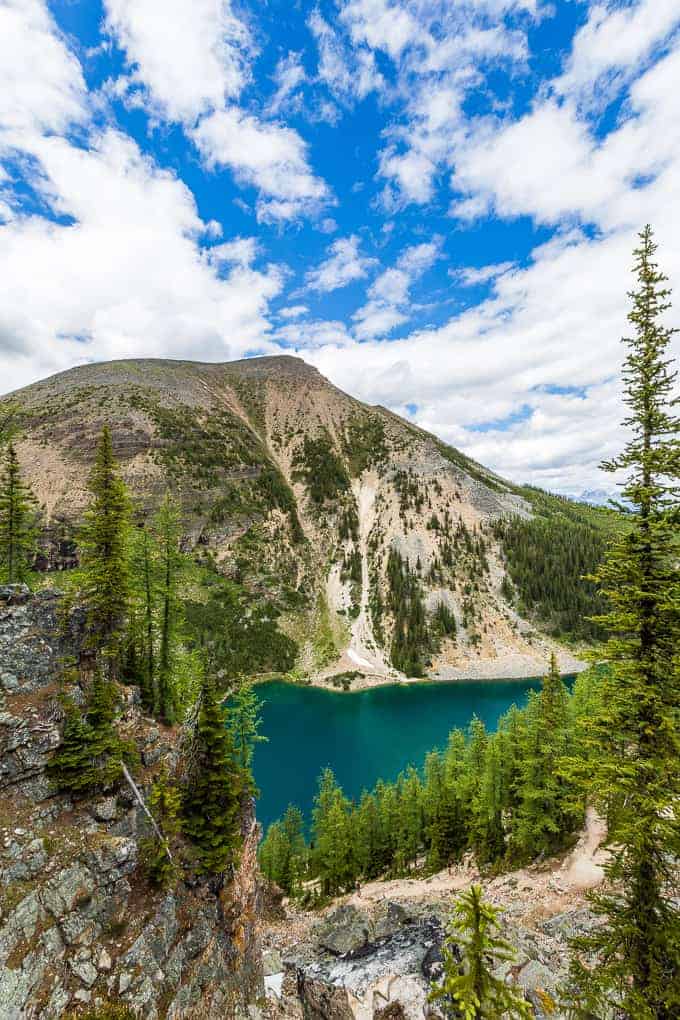 Once you get to the top of the beehive, you take a trail out onto the ridge where you’ll find a gazebo and better views. The climber’s trail for Devil’s Thumb is located on your left where the trail splits off for the beehive overlook, when you’re coming from the Plain of 6 Glaciers. There isn’t much actual climbing involved, but route finding skills are necessary because it’s very clear where people have gotten off track into some serious climbing.

The Devil’s Thumb climber’s trail leads you back toward the basin of glaciers you just left, and keeps going until you reach a shale slide you have to grovel up before the final push to the summit. Many people start too early before the shale and it would be incredibly dangerous to climb in those cliffs without proper experience and gear. 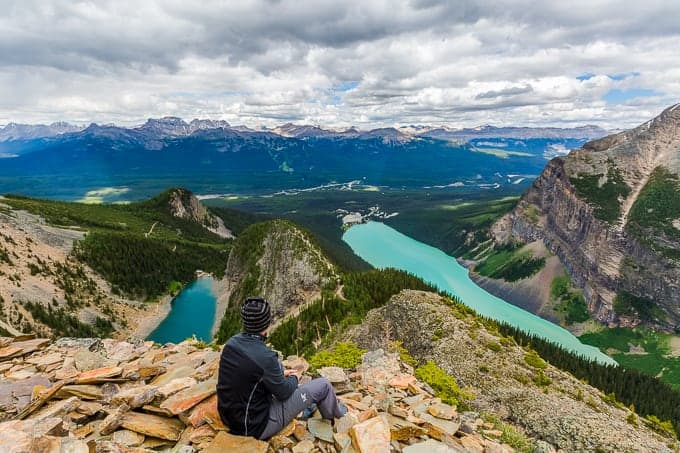 At the summit you’ll enjoy the most fantastic views with both Lake Agnes and all of Lake Louise visible at the same time. If you look closely, you can see the zig zag trail just to the right of Tyler in the above photograph.

This is the trail that leads up to the beehive, which is the bump of rock that juts out between Lake Agnes and Lake Louise, just to give you some perspective on where you’ll be. (I’ll be writing more about the beehive and Highline Trail in a post soon.) 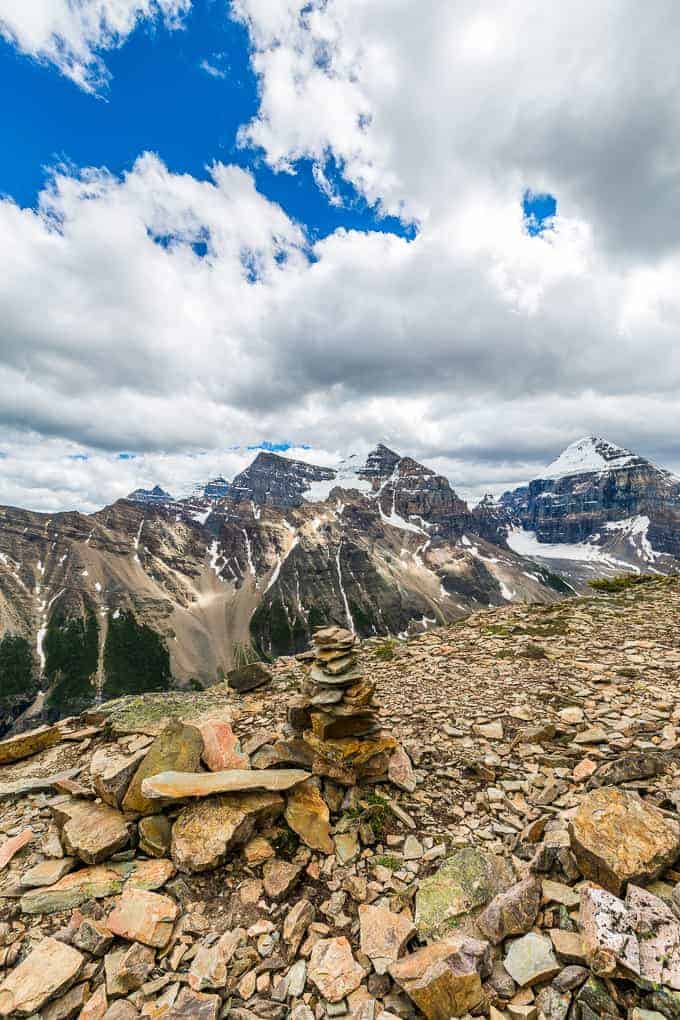 Our day started off with spectacular weather, but it quickly turned nasty in the mid-afternoon, and we had to get off the summit as quickly as possible. The last place you want to be in a summer storm is on the top of an exposed heap of rock! 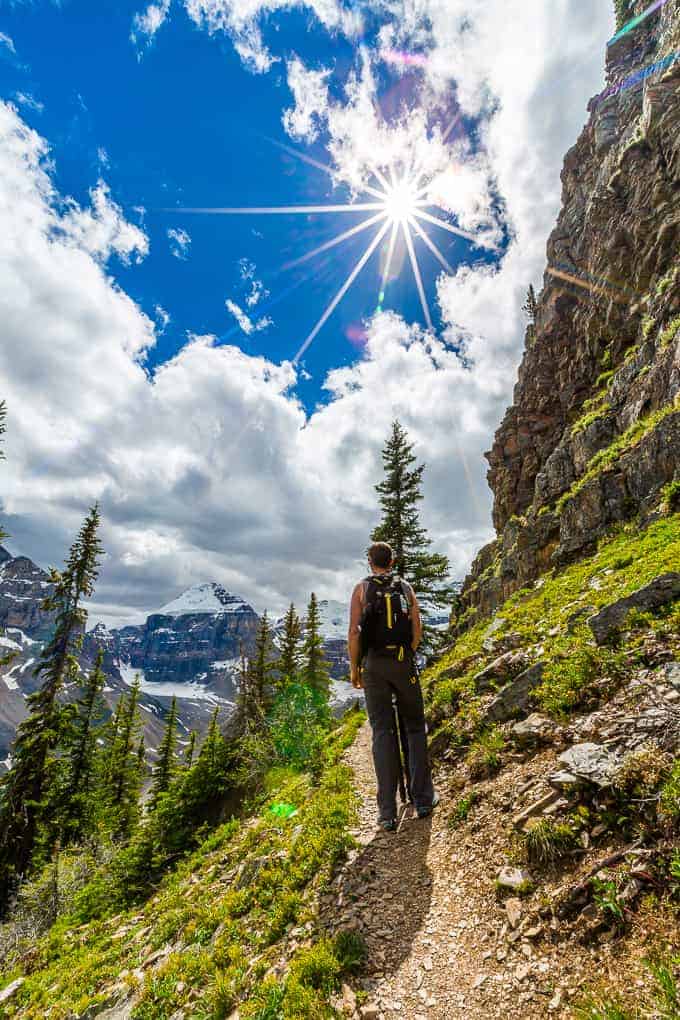 The sun broke out a few more times on our way down to Lake Agnes, but by the time we were heading out, it was pouring rain. We were super thankful this year to be more prepared for rain, we actually had rain jackets and Sea to Summit dry bags for the camera gear. It was so much better for peace of mind than our former system of ziplock bags for the camera, and coming back soaked to the skin because neither one of us owned rain jackets. 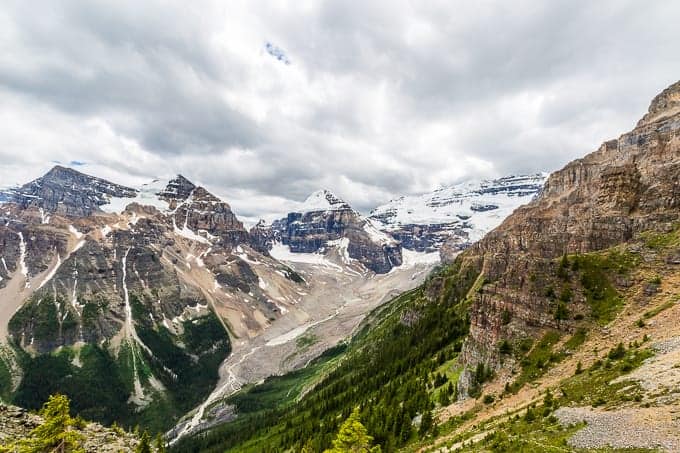 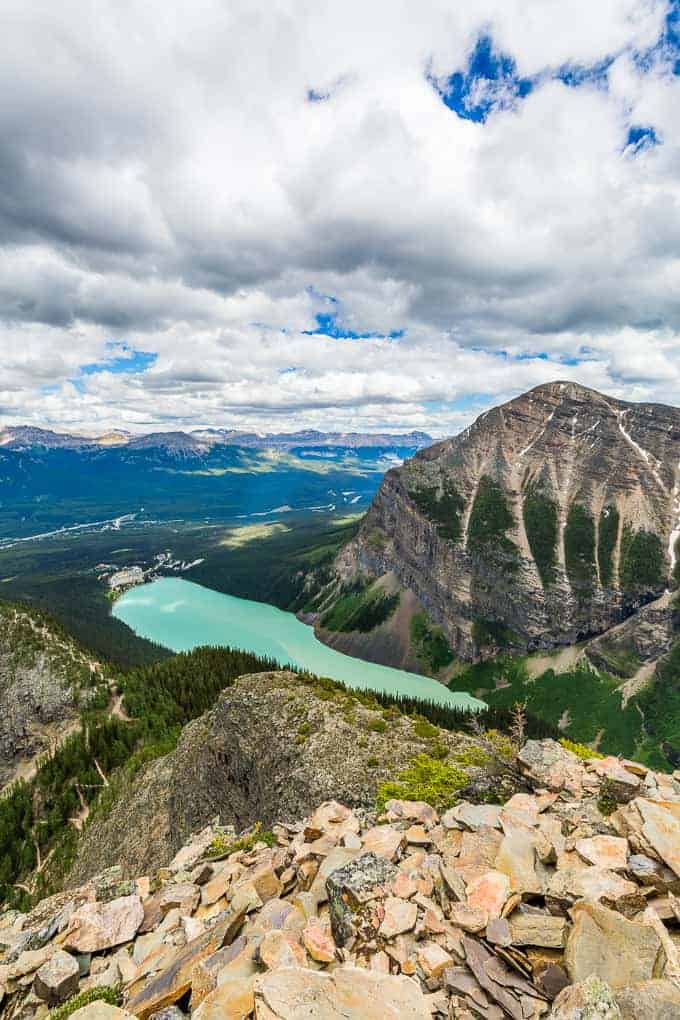 On our way up the shale, (which is one of those 2 steps forward and slide 4 steps back type of situations) we had a little incident with another party that was coming down off the summit. One of their party accidentally dislodged a rock, and in good form yelled out ‘heads up’ to those of us below. 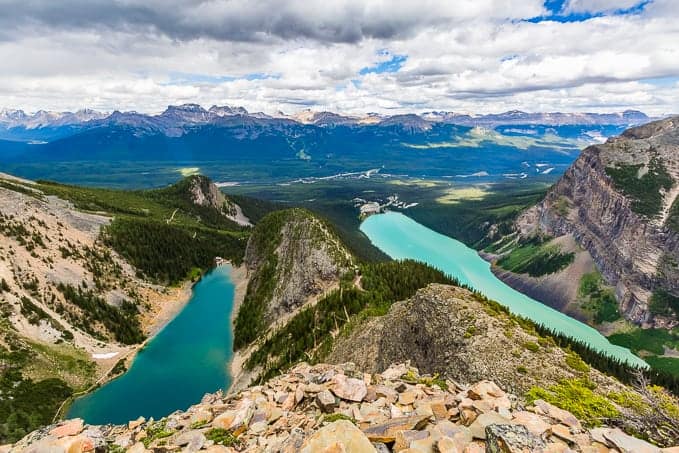 I was talking to one of them, and we both looked up at the same time to see something large hurtling right at our heads. This is always scary with the way rocks bounce, you never know where they’re going to ricochet next. 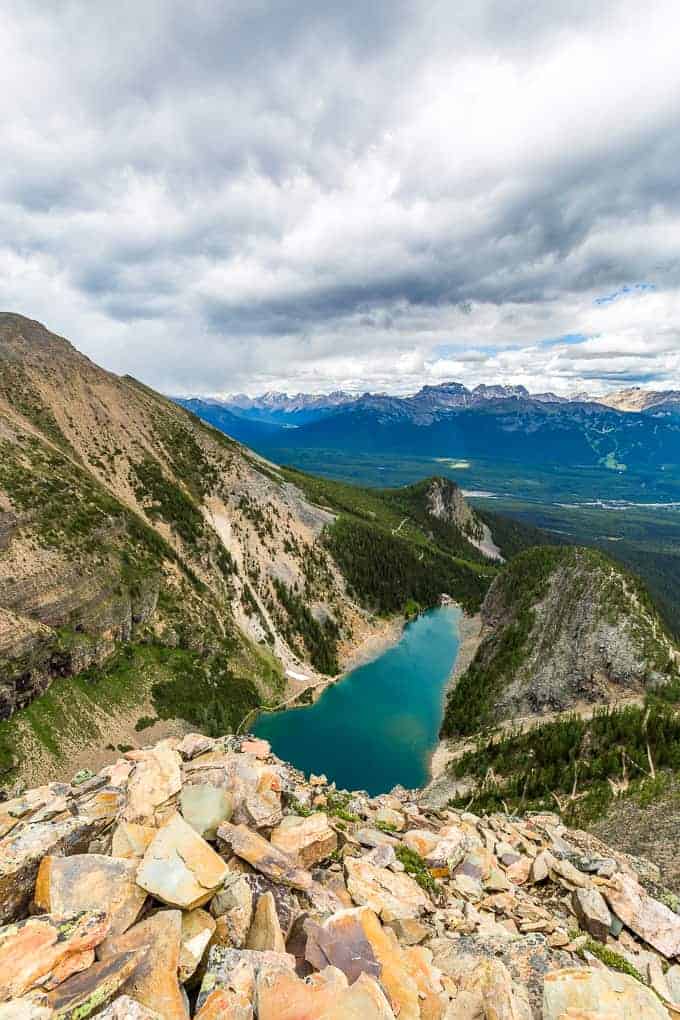 I bolted off to the right, but her friend didn’t move until the last moment when the rock whizzed right by his head, literally inches from permanent brain damage. When we were talking after the incident he said he thought she said dropped something and he was going to try and catch it, only to realize at the last second it was a rock the size of his head coming at him.

Moral of the story is to always be alert, be as careful as possible not to dislodge rocks, and always be respectful to other climbers and scramblers. Things are bound to happen, and it’s always good to be light on your feet and ready to react!