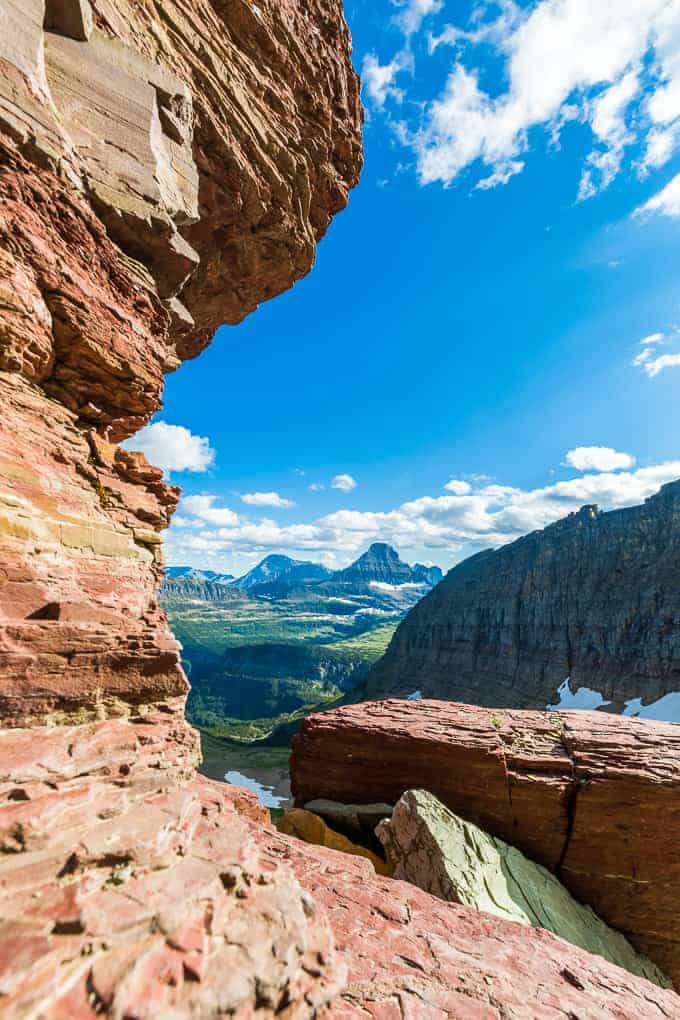 The views from this short scramble were unbelievable! The ‘trail’ of sorts for both Piegan Mountain and Pollock Mountain start at Lunch Creek which is just minutes from Logan’s Pass on the east side. We haven’t done much scrambling in Glacier National Park yet, so we really had a blast getting back into some tougher terrain!

We used to scramble all the time when we lived in Canada, and I’ll have to say that I prefer those mountains to the ones we have here. Most of Glacier National Park’s mountains are a pile of crumbling rock, and they even have their own climbing class system because the rock is so difficult to climb. If you’re thinking of a scramble in Glacier, be sure to check out several sources and go with someone experienced unless you have a lot of past experience yourself. Every year a few people get themselves into trouble because route finding on some of these peaks can be tricky. 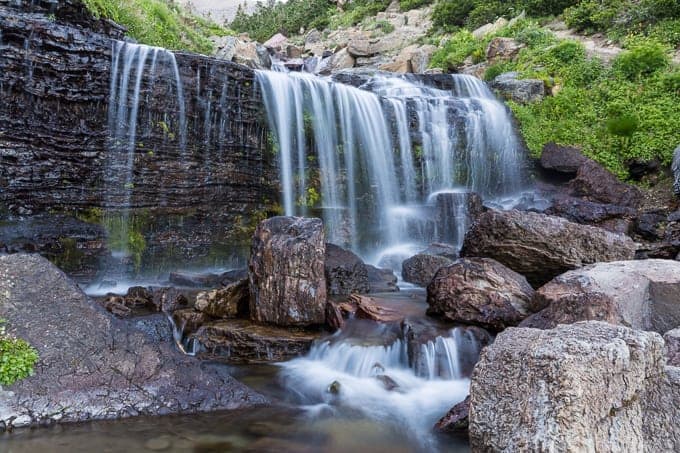 From there you can choose to scramble either peak, or take the option for a round trip of Pollock, Bishop’s Cap, and Piegan Mountain. We had a later start in the day and decided to do just Piegan Mountain as the winds had really picked up in the afternoon, and it’s not advisable to do Bishop’s Cap in windy conditions (due to a narrow saddle with great exposure where you can be swept right off the ridge top).

Tip: It’s almost always better to start early in Glacier because the winds tend to pick up mid afternoon which can foil some of your summit attempts! 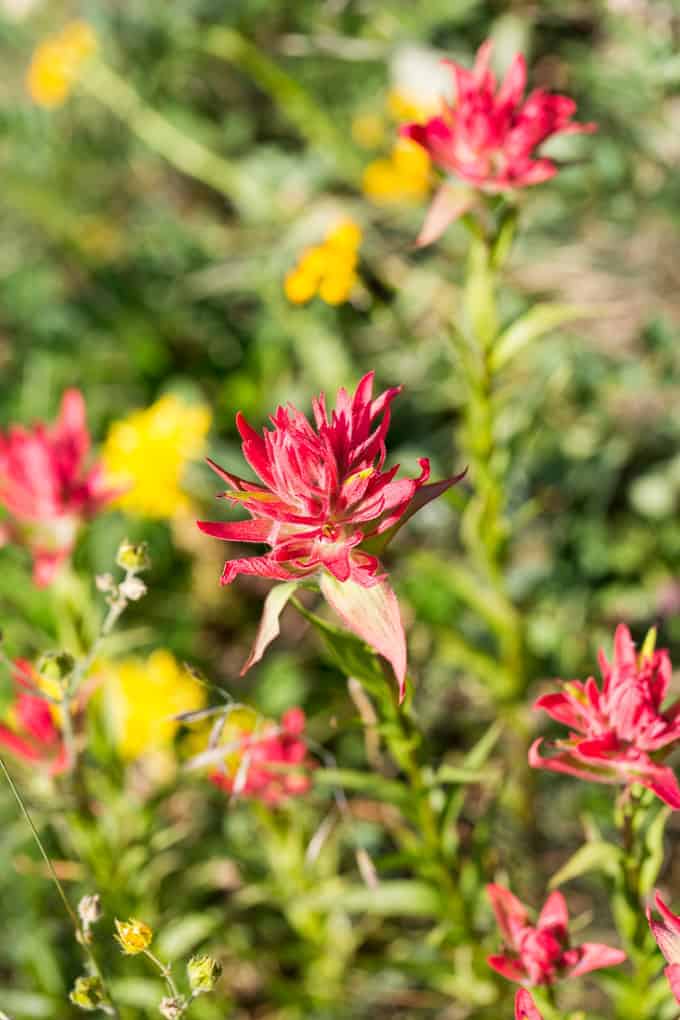 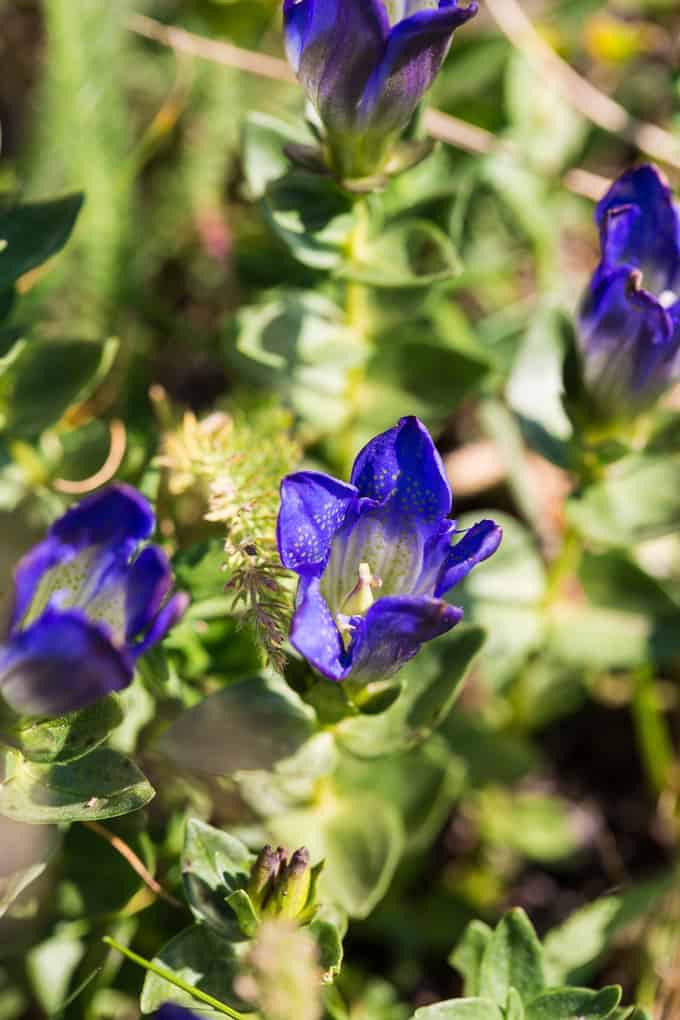 The wildflowers were stunning along Lunch Creek because they have such a great water supply. The area is also shaded towards the end of the day which helps preserve the flowers here longer if you’re after some wildflower shots! 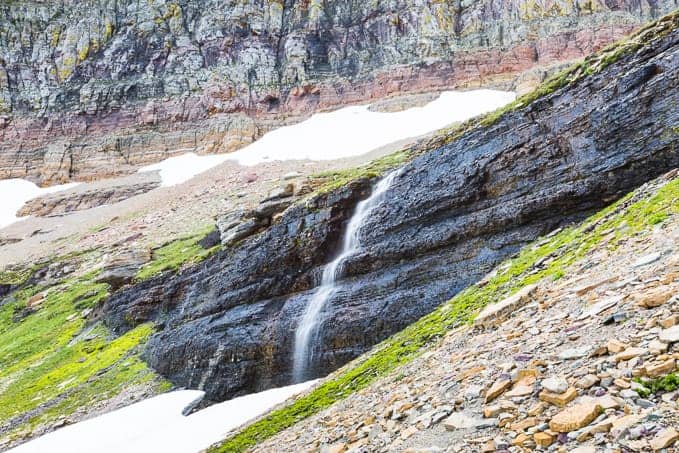 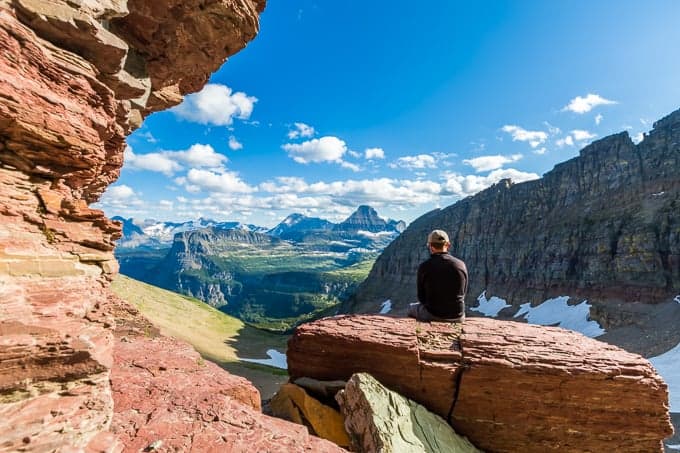 This is the view right before you really get into the cliffs, and it’s a great spot to have a little snack. 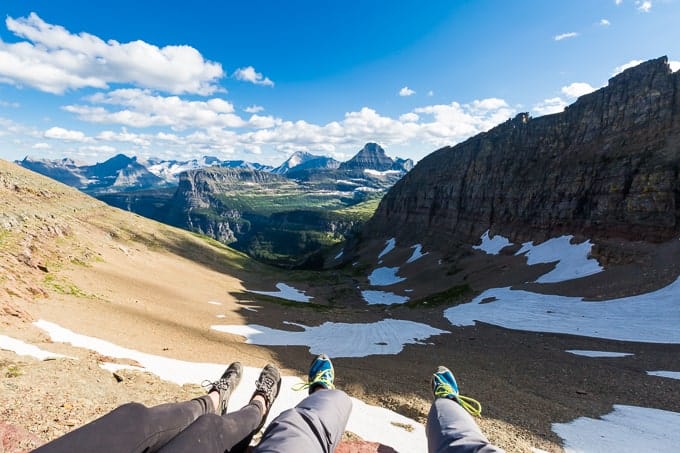 Here we are, just resting our weary legs (can we say… out of shape)! 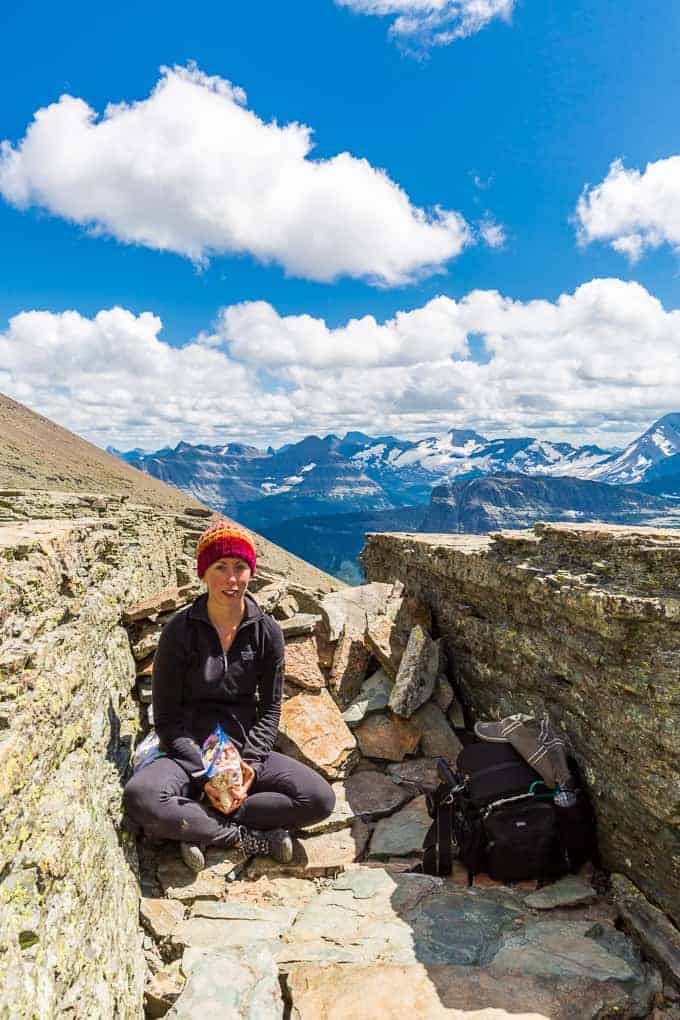 There’s a couple of sheltered areas in the rocks when you get to the saddle where it’s nice to stop for lunch. 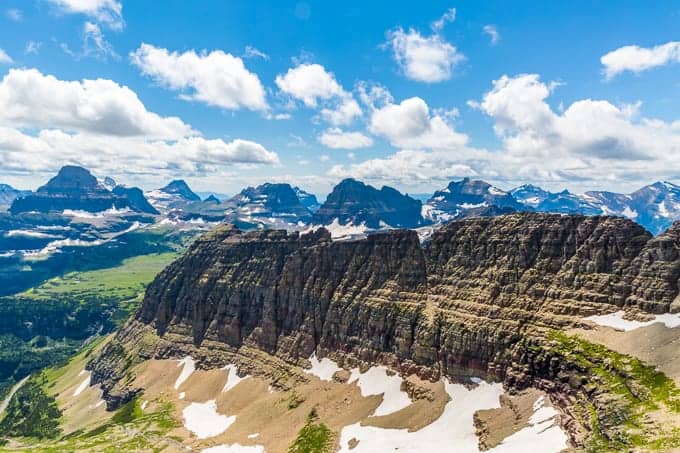 And… the view’s not to shabby either! 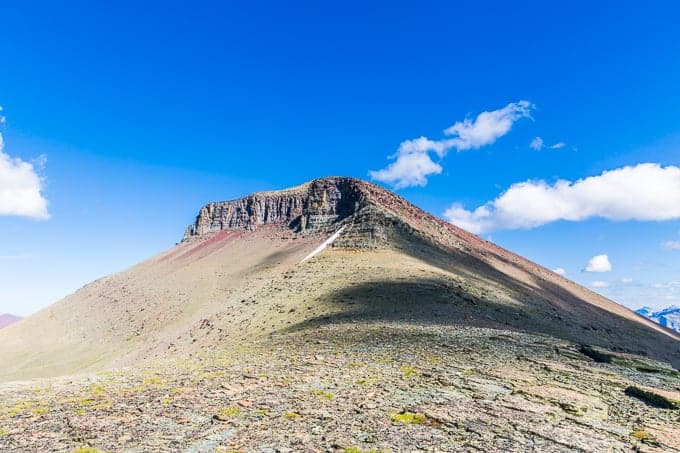 Here’s a picture of the summit of Piegan Mountain from the saddle, as you can see it’s really just a heap of rubble. Apparently it’s just a little over a mile from the road to the summit, but in that teensy mile, you gain 3,000 feet of elevation making this more than just a little steep – read legs wobbling from lack of use.

I’d forgotten how different scrambling is from hiking, it uses all sorts of muscles you’re not normally aware of. The next day, my arms and back were sore just like I’d worked out at the gym. Tyler was fine but he doesn’t have to use his arms as much as I do, being 5’2″ really presents some challenges for me that are just a bigger step for him! 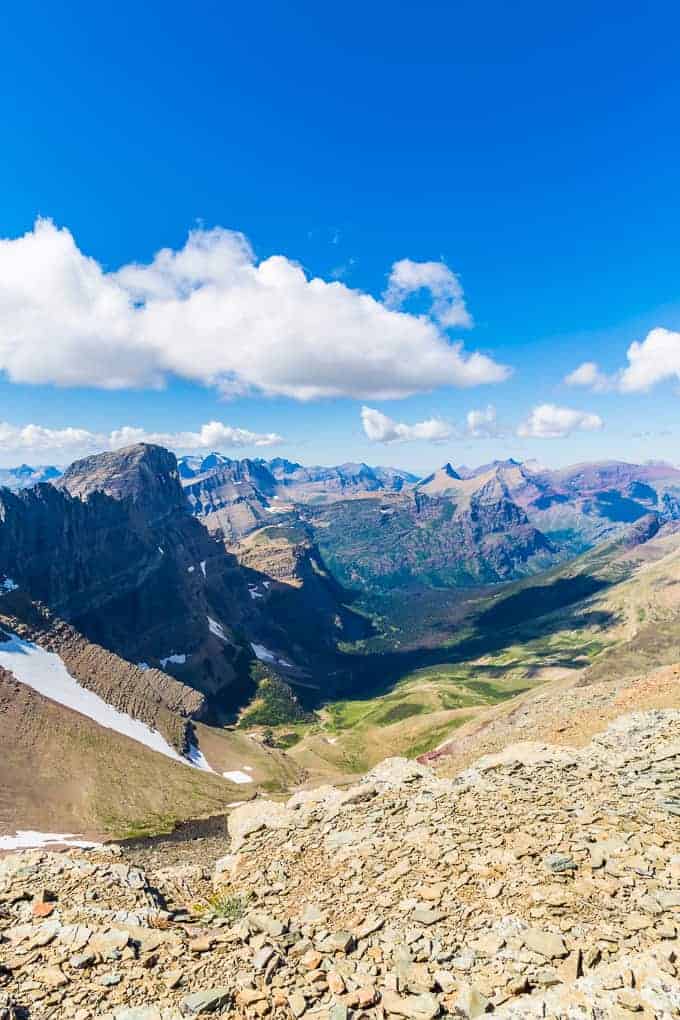 From the top you can see right into Many Glacier, Logan’s Pass, and Preston Park which is along the Siyeh Trail. You also get to look down on Piegan Glacier with both Jackson Glacier and Sperry Glacier off in the distance. 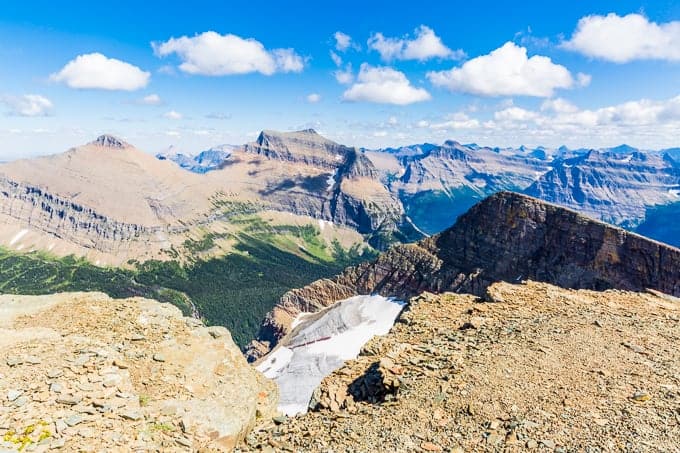 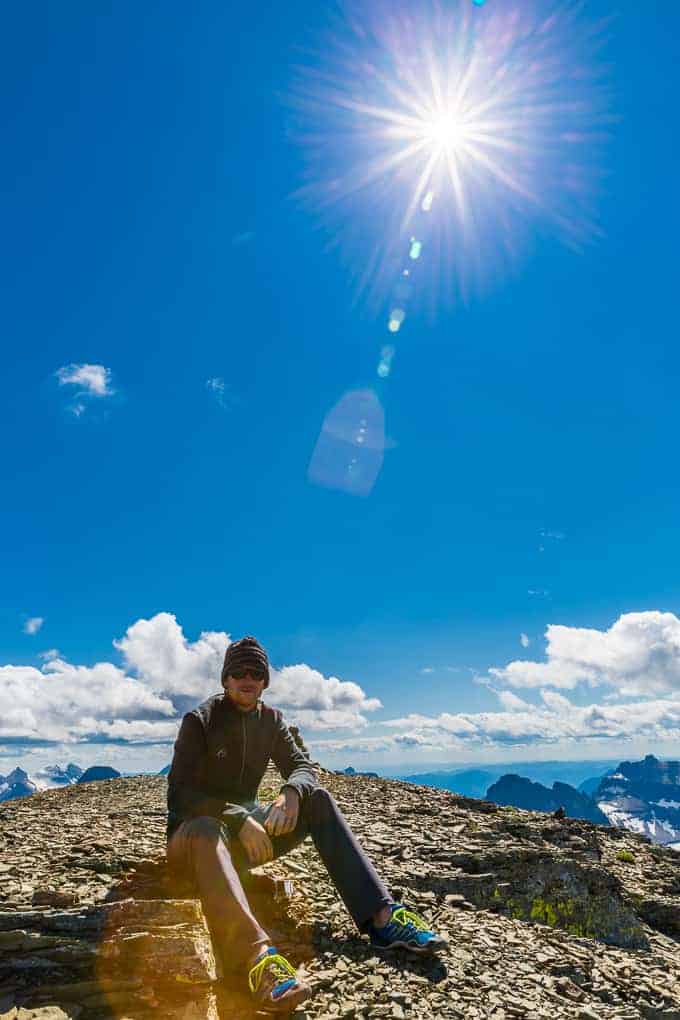 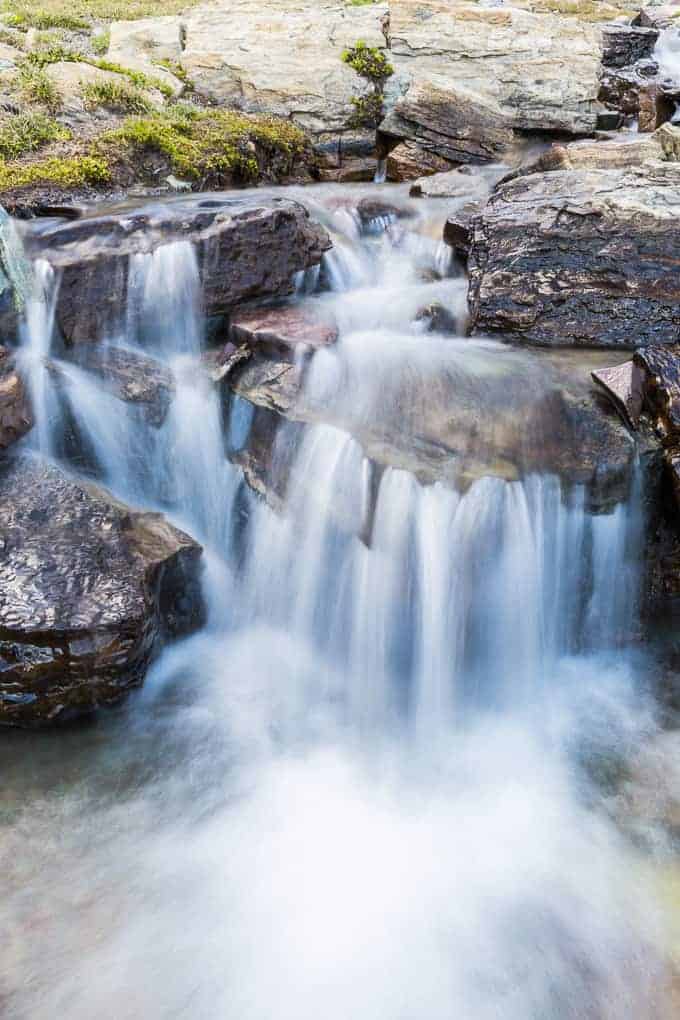 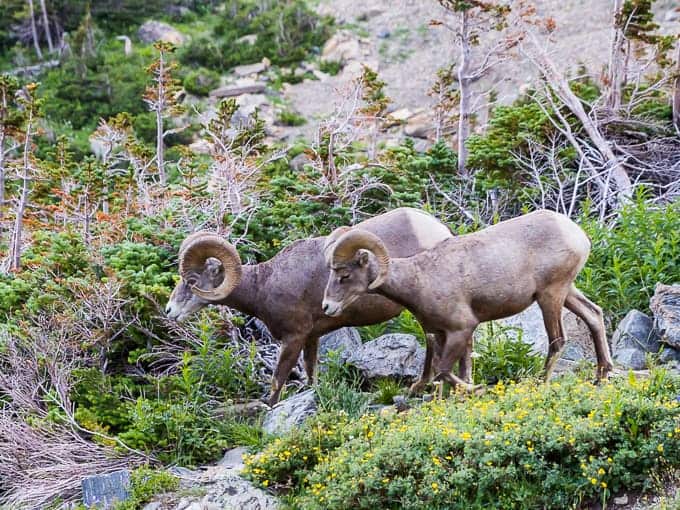 On our way back down, some Bighorn Rams decided the trail was all theirs and we ended up taking quite a detour through a field of boulders. I went back to the Lunch Creek area for a few more photos a couple of days later, and had several run-ins with the same group of rams… but that’s a story for another day! 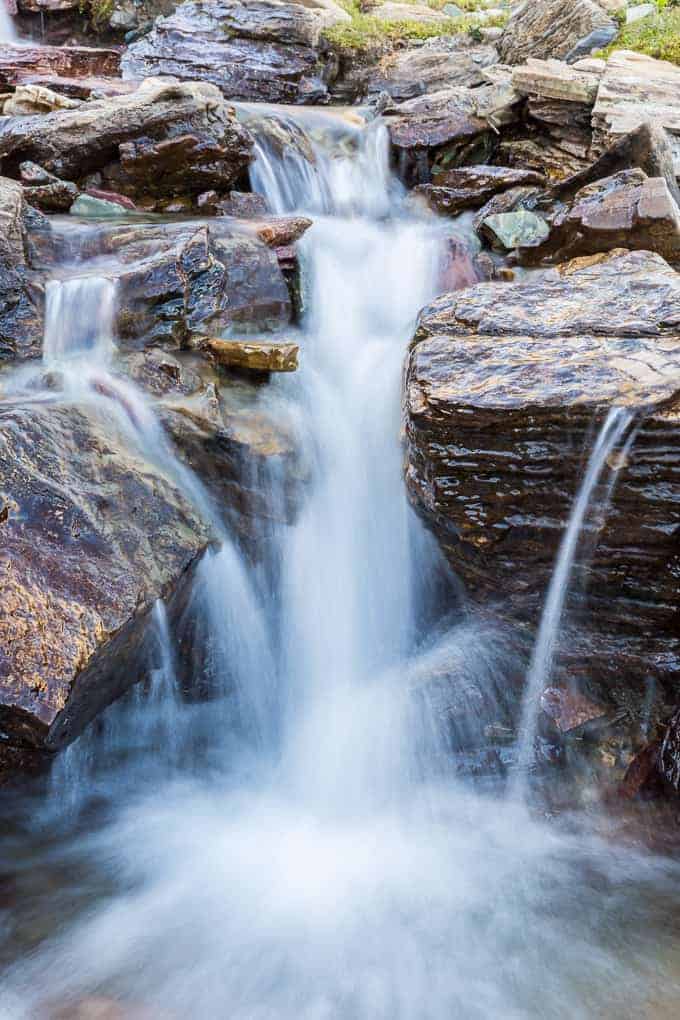 I just want to note that entering the wilderness should always be taken with caution, scrambling in particular presents it’s own dangers (um… rotten rock anyone?) if you’re not familiar with route finding and such like I mentioned. Whenever there’s a doubt or you feel uncomfortable, always! always! turn around.

It might seem a little boy scout, but it’s always better safe than sorry! A couple weeks ago we saw numerous people undertake the 11 mile hike of Grinnell Glacier without carrying anything other than a camera (seriously… no water, no bear spray, no food and it was 93ºF). And it’s on endeavors like this that people end up getting hurt or hospitalized for dehydration.

I really don’t mean to preach or anything, I just want you to have the best experience when you come to the mountains, and the best experiences happen when you’re prepared! I’m also sure there’s tons of stuff I haven’t covered, so don’t hesitate to consult the rangers when you enter a National Park, they’re very knowledgable and can really help you with your visit!