These are simply The Best Flourless Brownies I’ve ever made! I’ve been tinkering around with them for 8 years now and I know you’re going to love these. They’re deeply fudgy, super easy to make, and just over the top delicious with a touch of flaked sea salt!

When I’m craving a brownie, what I’m after is a fudgy, ultra chocolatey experience. A little bit of chewiness and a lightly crackling top are also necessary part of the package. No fluffy or cakey brownies to be found here.

I found the perfect ‘better than the box’ recipe a few years ago. And I would make it from time to time for the occasional guilty indulgence. It was straight up white sugar, white flour, and all things processed though.

These days, I’m still wanting all that yumminess, but without the processed ingredients and loads of sugar. Now you might not think that would be possible, but I have the pictures to prove it most definitely is.

I originally saw the idea to use nut butter for baking from Elana’s Pantry. And ever since I baked my first brownies with nut butter, I’ve been using it to make all sorts of things ever since!

Nut butter acts as a ‘flour’ of sorts in baked goods. And I’ve had good success with everything from muffins to brownies and cakes. They’re all made with nut butter, and I’ve included them all below!

Now let’s jump in and talk about the ingredients for The Best Flourless Brownies!

Start by measuring out all of the ingredients.

Then add all of the ingredients to a medium sized mixing bowl.

Next mix until the brownie batter comes together and no nut butter lumps remain.

Finally spread the brownie batter evenly into a prepared pan. Then bake until puffed in the middle and just done, about 20-25 minutes.

And finally some more flourless baked goods, all made from nut butter!

And if you really love brownies, be sure and check out all of our brownie recipes! You’ll find everything from German Chocolate, to Cookie Dough, and Blondie S’mores Brownies too.

I hope you enjoy these as much as we have! If you do make them, I hope you’ll leave me a comment/rating below, I always love hearing from you here. 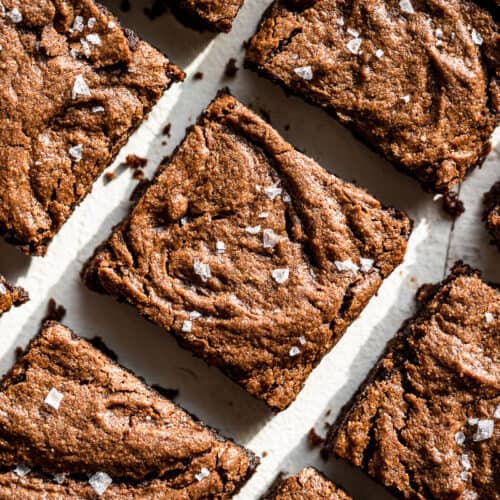 This recipe was originally published in 2013, but has been updated in 2021 to include more tips, new information, and brand new photos.

54 thoughts on “The Best Flourless Brownies”