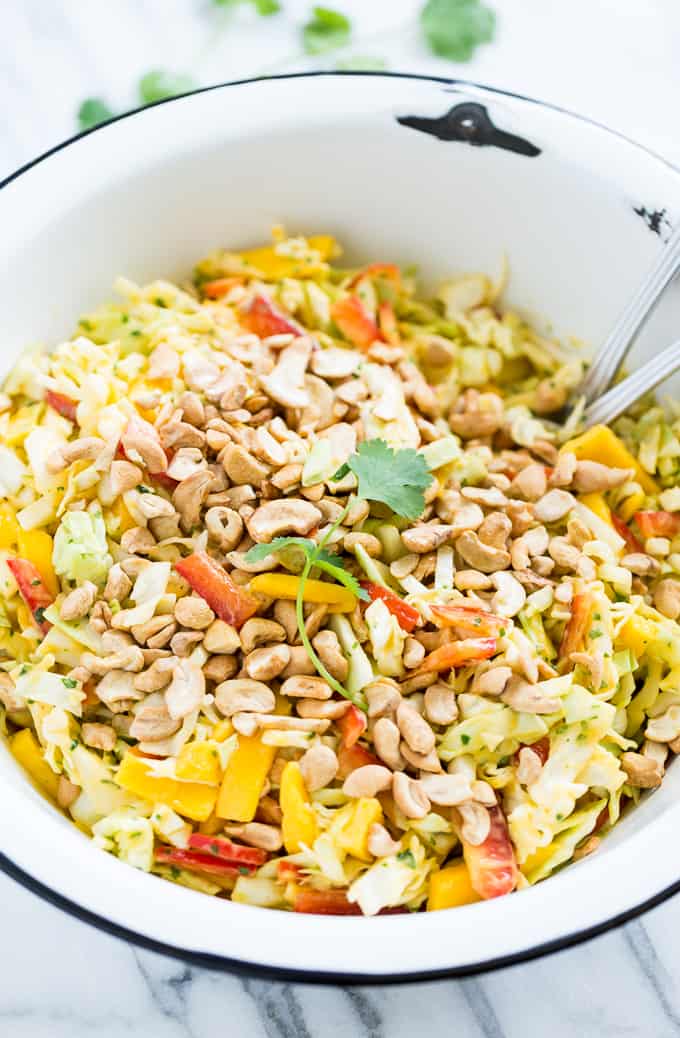 This recipe started with a text message from my sister saying, ‘what do you think about coconut cream as part of the dressing in a slaw’? To which I responded, ‘how does Thai Slaw with Coconut Mango Dressing sound’? And… with that I was off and running, straight off the the kitchen where some perfectly ripe Champagne mangos were begging me to do something with them. I know I’m not the only one who isn’t fond of the mayo dressing in coleslaw, so I thought this would be absolutely perfect.

Now I wouldn’t want you to think I had something against mayonnaise (especially homemade) or anything, in fact my sister and I ate a full batch (1 1/2 cups) in 1 sitting just a week ago. I’ll blame it on the fact that she brought over some wild asparagus she had foraged, and we grilled it up into smoky perfection (asparagus is amazing on the grill). I could blame it on the asparagus, but in fact I may have a slight addiction to homemade mayonnaise!

But getting back on track, for some reason I’m not a fan of mayo based dressings, so that’s where this creamy, vibrant version comes in. It’s packed with fresh flavor, but it still maintains the requisite creaminess that’s all but mandatory in a slaw. I was so surprised by my new found love of all things slaw, that yesterday there was a blue cheese version created as well to go with some buffalo burgers (just some more summer goodness to look forward to). 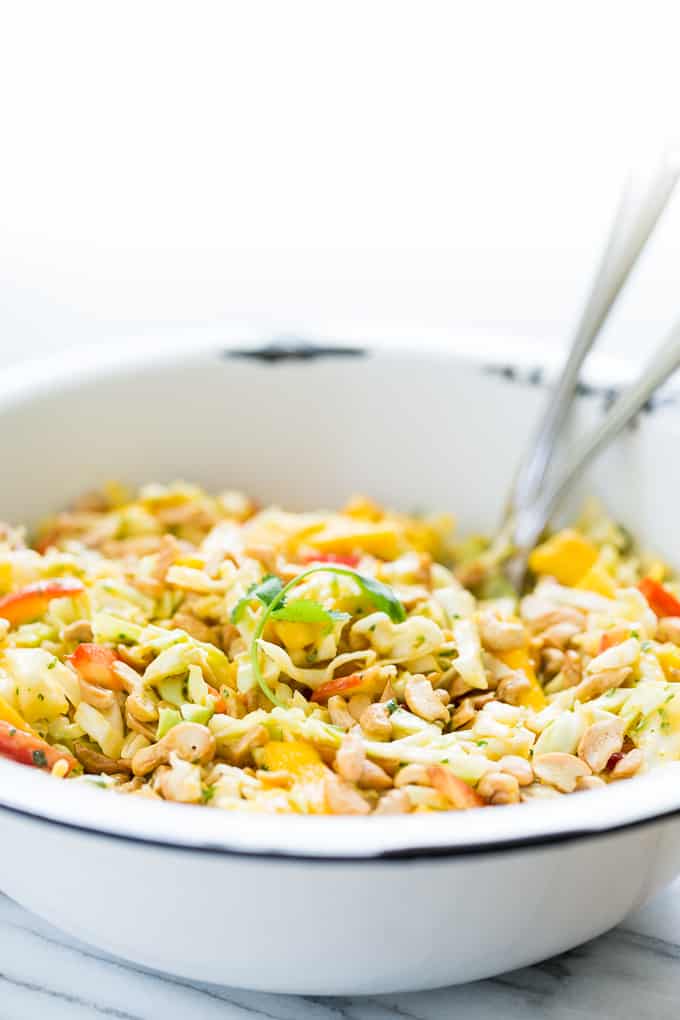 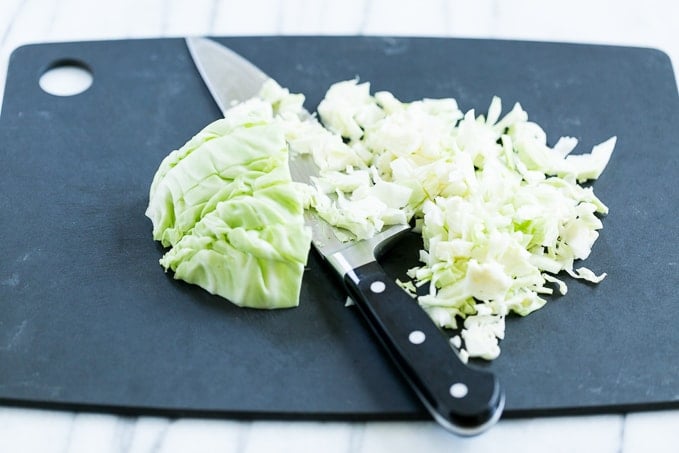 The fastest way to shred cabbage is probably a food processor, but if you don’t have one of these handy machines I can’t recommend it enough. I use both my food processor and Vitamix blender daily, and they’re invaluable to making healthy eating doable.

Anyways, if you’re chopping the cabbage by hand, the best way to start is to cut off the 2 rounds off either side of the core. I turn the cabbage upside down with the core facing up so you can see where to cut. From there I cut across the round into thin strips, and then cut crosswise as thinly as possible for a shred. With the rest of the cabbage remaining, cut the core out and shred the rest by thinly slicing it. 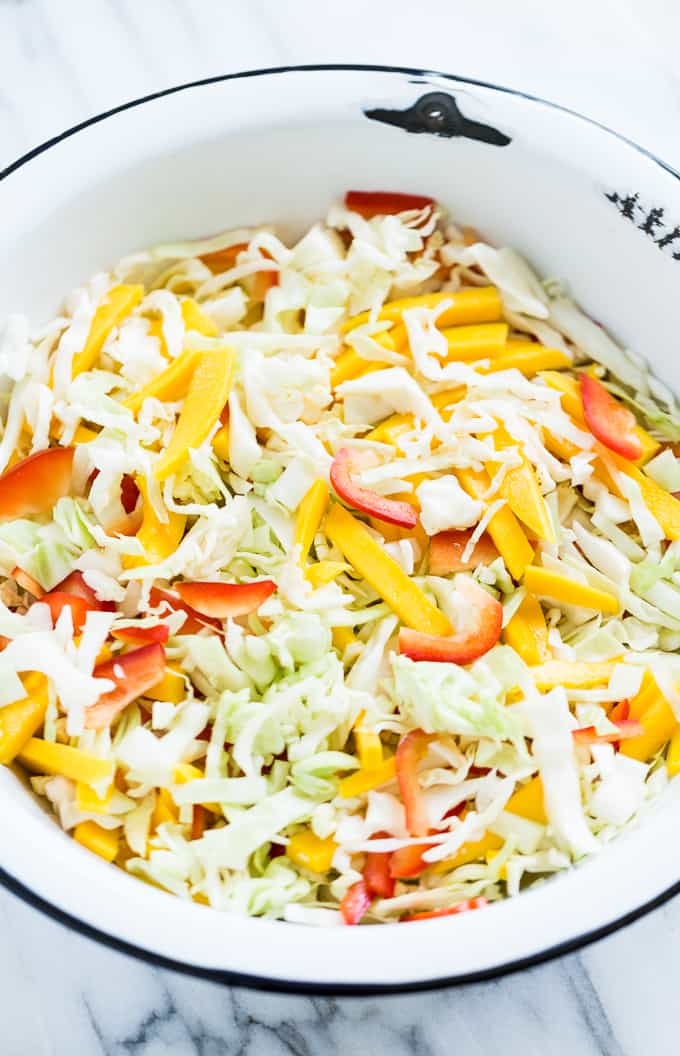 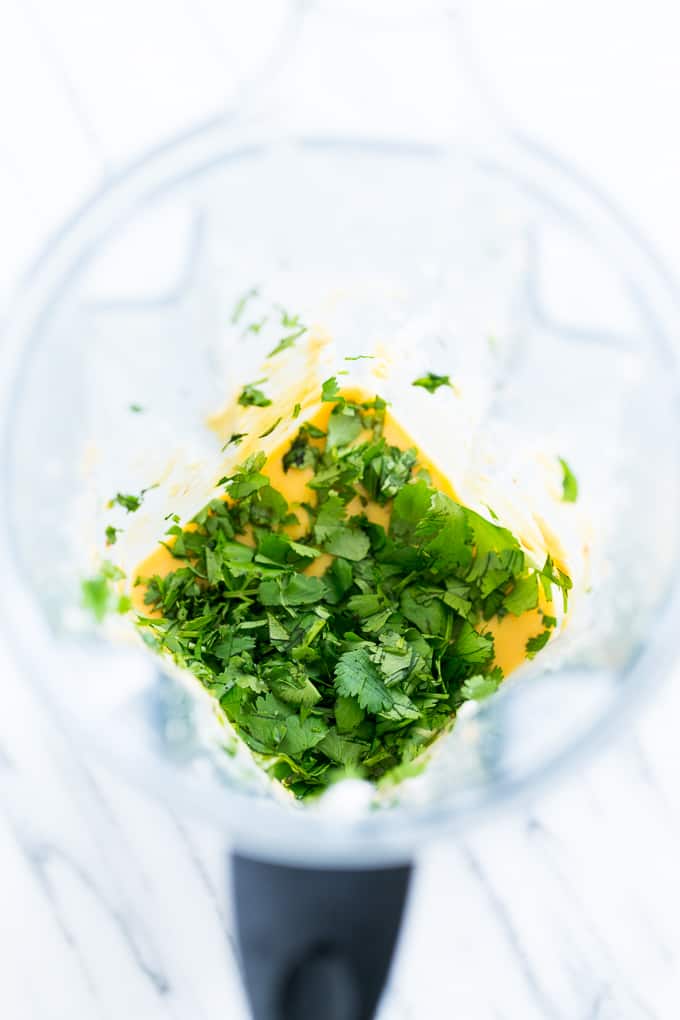 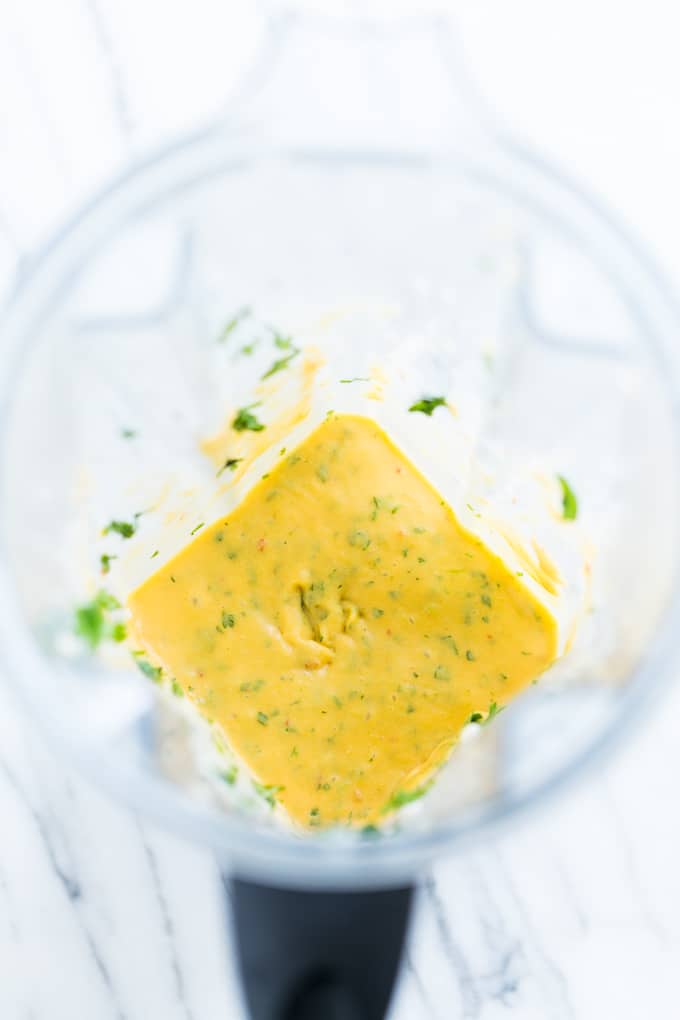 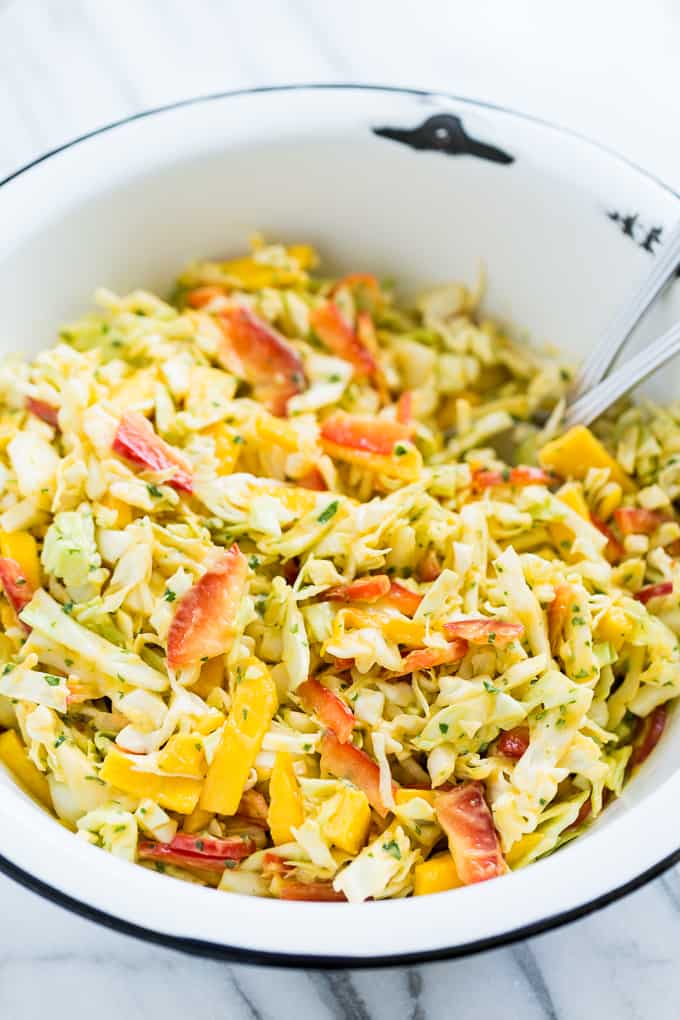 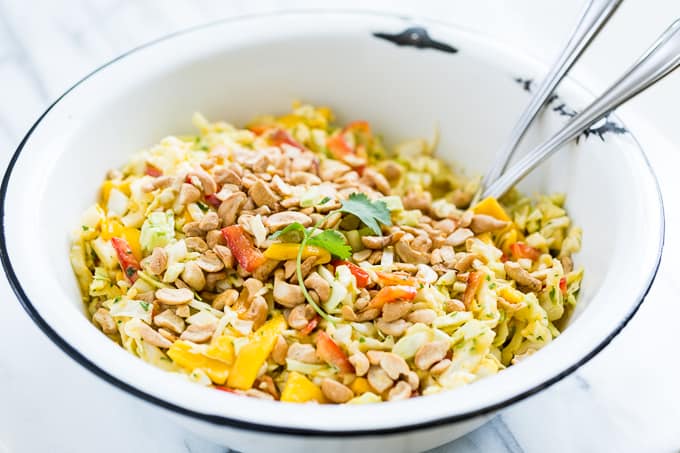 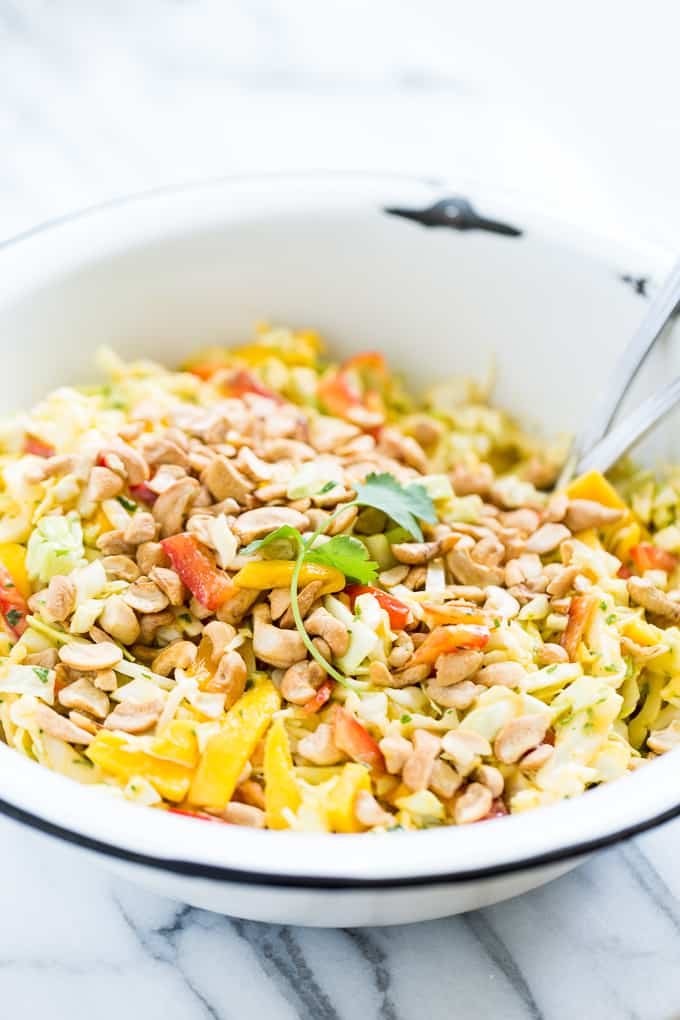 Even though we ate this both times as is, I know exactly what I’m paring it with next. I think this Grilled Saté Chicken from my noodle bowls is going to be a winning partner for many ‘no-cooking on the stove’ meals to come in this sweltering heat!

If you use frozen mango in the dressing, you’ll need to use the tamper that comes with your blender to keep the mixture moving because it will be extra thick.