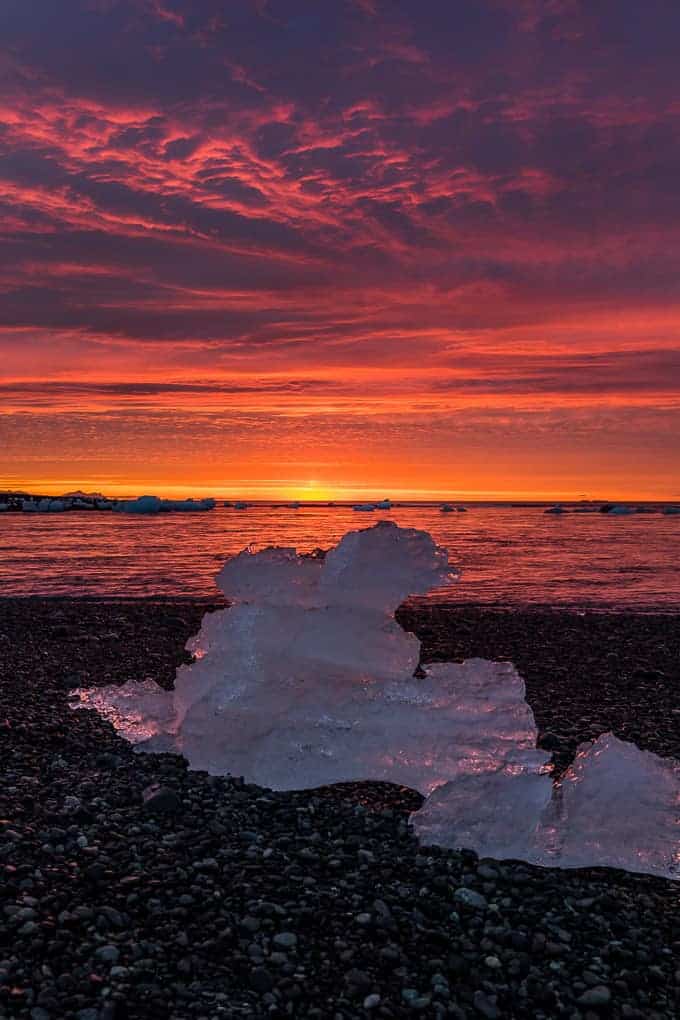 We left off at the end of Day 7 having climbed a mountain, and then driven in the dark to the famous Jokulsarlon glacier lagoon. We were also really hoping the clouds might clear so we’d be able to see the aurora that was predicted. When we finally arrived after a seriously long day, we were dismayed to find the whole area absolutely crawling with photographers in the middle of the night.

But since we were already there, we made the best of it, and started setting up to get a few shots. It was rough going to say the least, and I think for both of us, patience was wearing thin. We’d climbed a mountain on just a few hundred calories, (see Day 7 for the whole story) and had only had a small piece of cheese for dinner.

We were also predictably exhausted, but neither one of us can ever say die, so we soldiered on. It seemed almost impossible to get a 20-30 second shot without someone beaming their flashlight into your scene or another car pulling into the parking lot, sweeping their lights across the lagoon. 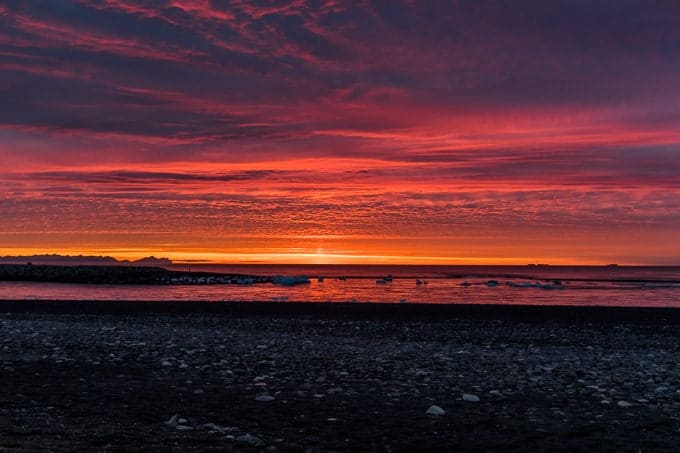 But eventually after a couple hours, we managed to get a couple of halfway ok shots, and then decided to call it a ‘night’. (You can see the night shots in photo number 4 & 5 in this post.) Of course by now it was somewhere around 3am on Day 8. We knew we were getting up before 5am for the sunrise, so we climbed into the van to nap for a couple of hours.

When the alarm went off, what seemed like a split second later, I woke up in a complete panic, disoriented and not knowing where I was. I was also puzzled by the red glow inside the van, until I pulled  back the curtain to see the sky was already lit up with color. Then the panic really set in, and I woke up Tyler in a hurry to race over to Diamond Beach for the sunrise. We thought we were getting up way before the sunrise, but not having the internet to check for the exact time, it must have been a bit different right next to the ocean. 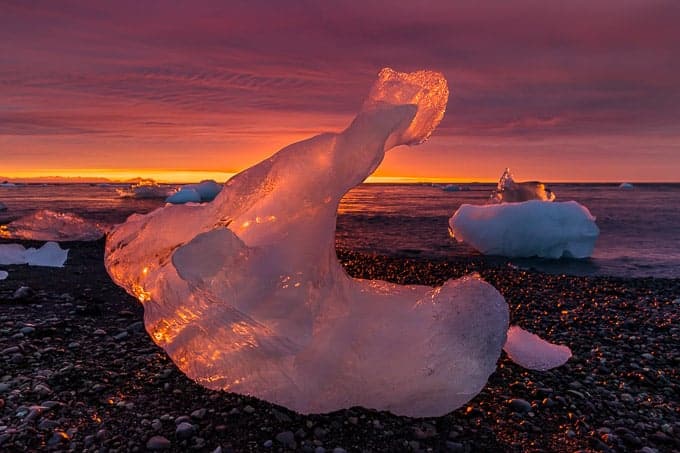 By the time we pulled into the parking lot just a few minutes later, the sky was on fire in a way I’d never seen before. I grabbed my pack with all my gear, and vaulted out of the van with the camera. I felt slightly better as I was tearing down the beach when I saw lots of other photographers doing the exact same thing. We must have all over slept, or the sunrise was just insanely early by the ocean – it’s something I still need to figure out. 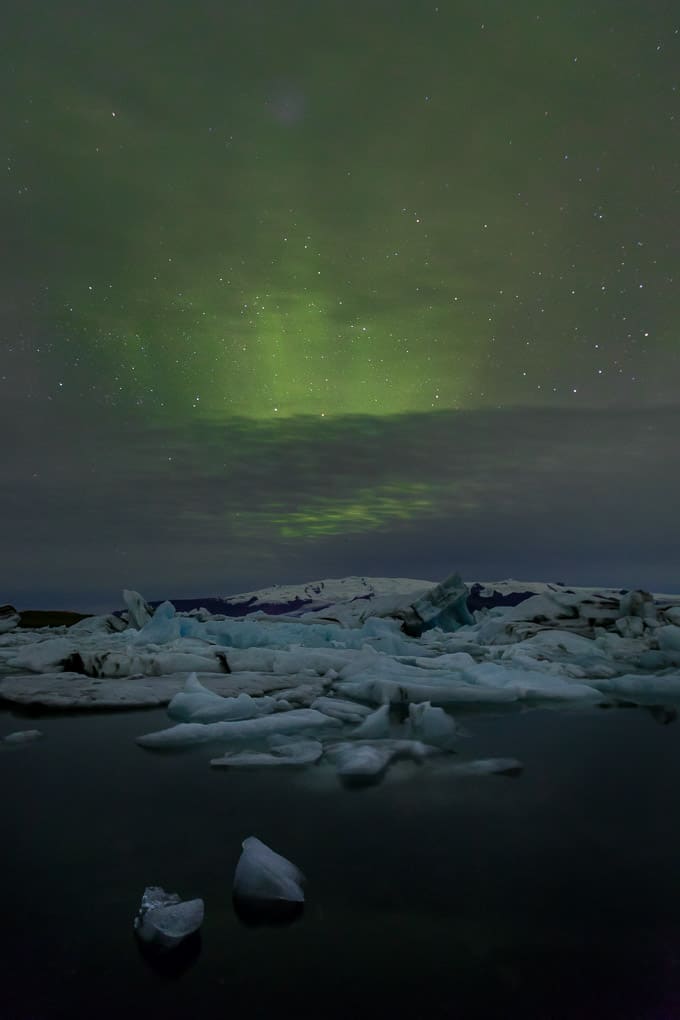 In any case, from the photos, you can tell it was a sunrise for the books. I’ve never seen one quite like this before or since. The color was absolutely unreal! And speaking of which, I take all my photos in raw which means when you first view them, they’re dull, flat, and in need of some editing. However when I edited these I didn’t add any color to them at all, which is unusual, since I always add a touch. But this sunrise already looks unreal without any help! 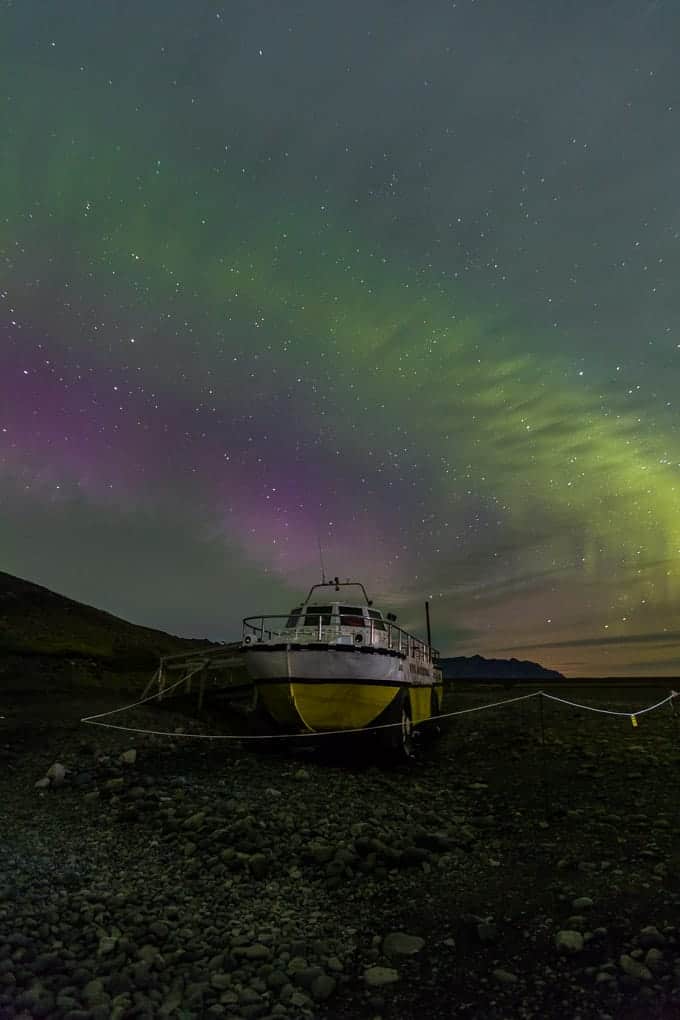 One of the fun things about Diamond Beach is the pieces of ice that wash up with the tide. The chunks of glacier come from Jokulsarlon glacier across the street and float into the ocean. As they’re worn with the tide, they become clear, like sparkling diamonds. 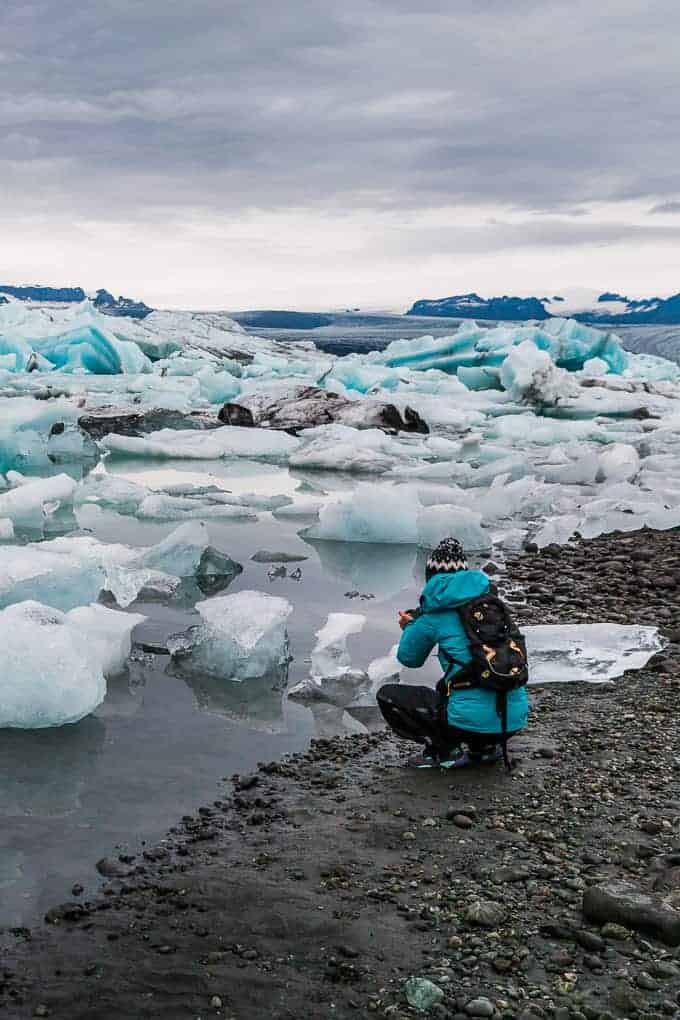 Once the sunrise died down, we decided to head back across the street to the lagoon to get some photos in the daylight. We were both dragging badly at this point having had almost no food the day before, 2 hours of sleep, and no coffee yet that morning. But what to do when you don’t have any options? 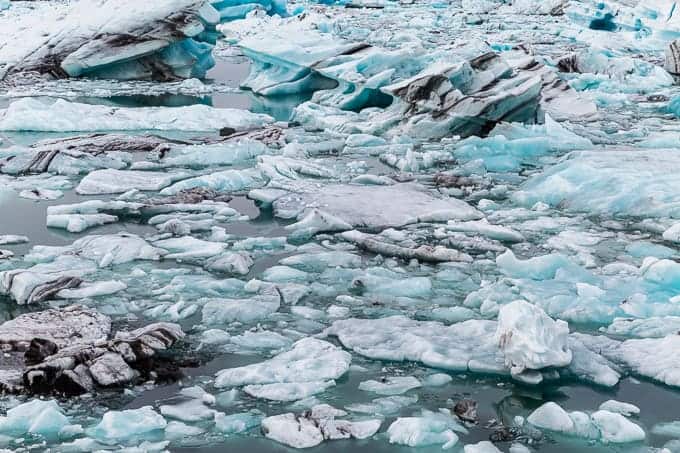 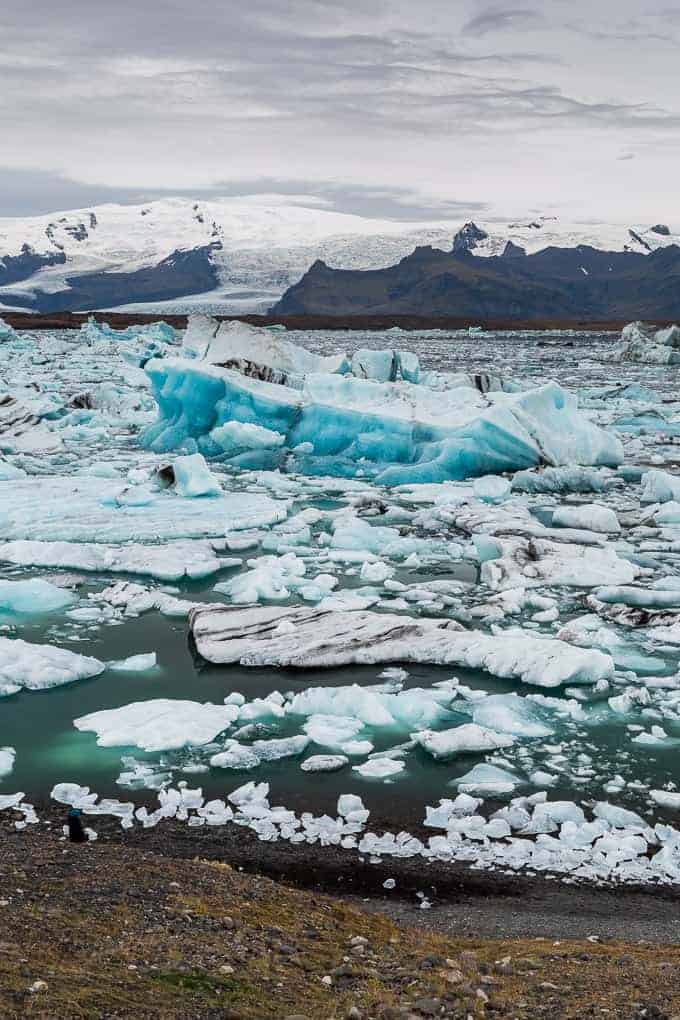 So we meandered around the lagoon looking for interesting photos until the cafe opened up. The minute those doors opened, we were in line and looking for a strong cup of coffee. Unfortunately luck wasn’t on our side. We did get a cup of coffee to be sure. However not only did it taste terrible, but as far as either of us could tell, there must not have been a measurable amount of caffeine in it. 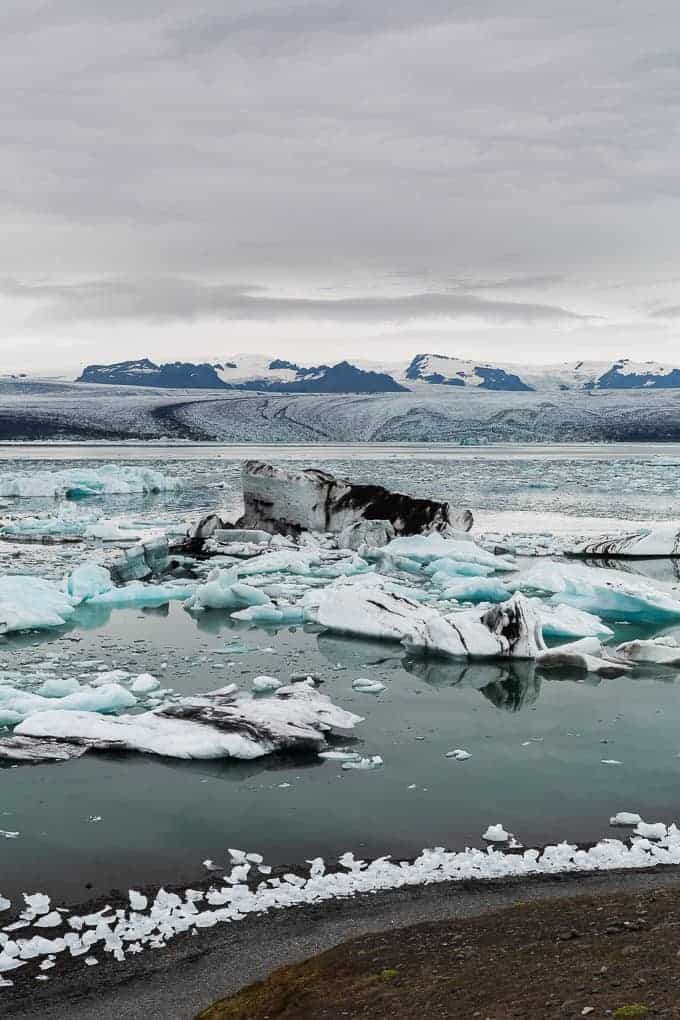 Since that was our only option at that point, we just decided to keep going, hoping we’d wake up along the way. We had contemplated getting something to eat while we were there since we were both famished, but they didn’t have anything allergy friendly we could eat.

So way past the point of hungry, we headed back to the van for another power bar, and drove just up the road to another glacier lagoon called Fjallsárlón. This lagoon is equally beautiful as it’s more popular neighbor, but so much quieter. 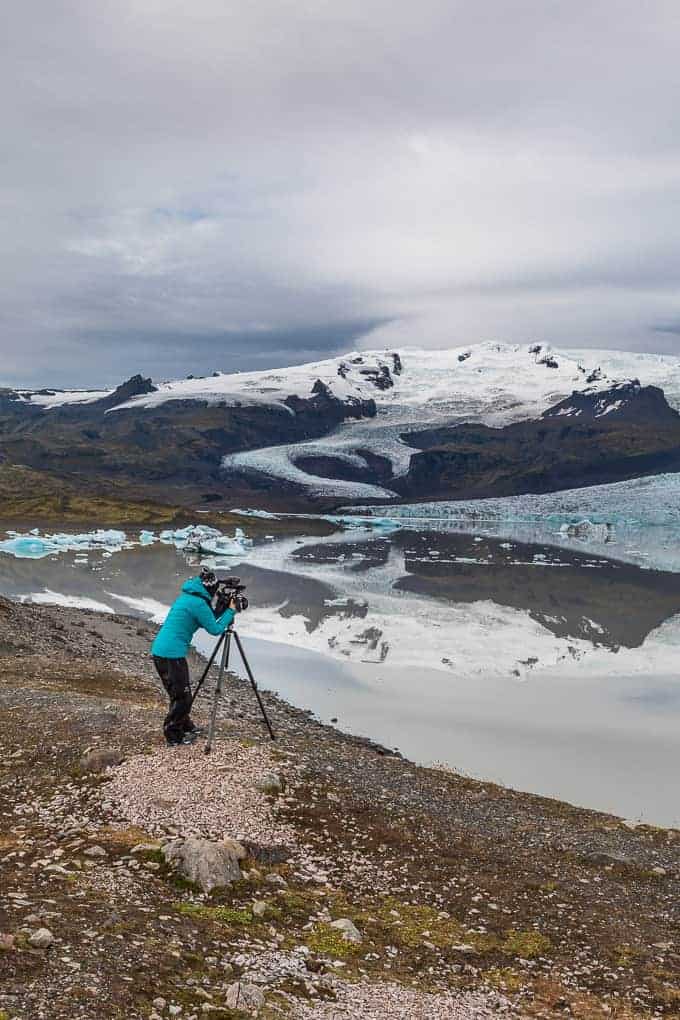 We explored around for a while taking photos, and had the privilege to see part of the glacier calve, and crash into the the water across the lagoon. It was amazing to watch, and it thundered like an avalanche.

Once we had all the photos we could possibly think to capture, we decided to try our luck with the cafe located here. So we went in and bought another coffee, only to be seriously disappointed again. Not only did it taste terrible, but we were still lacking the necessary caffeine to start waking up. 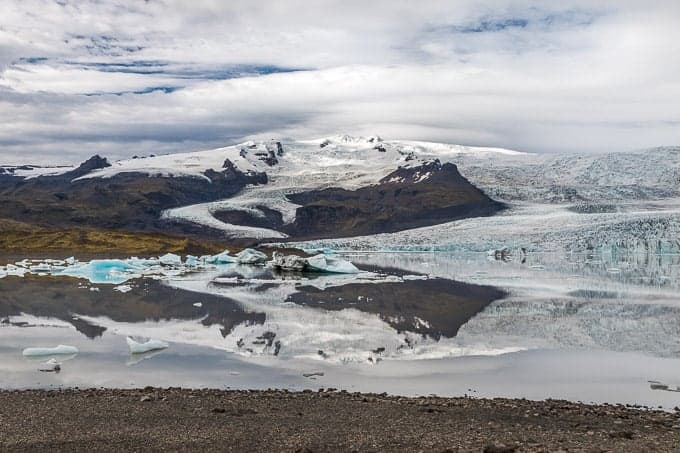 Giving up on the coffee situation for the day, we resigned ourselves to having to wait until we could get fuel for our stove at the next town. Then we headed down the road to our 3rd glacier of the day called Flaajokull.

This glacier hike is super short, (about 4km) and pretty quiet compared to the first half of our day, which was a nice change. It’s also one of those hikes where you’ll need to use your common sense, and read up to be informed if you’ve never hiked in glacier territory. 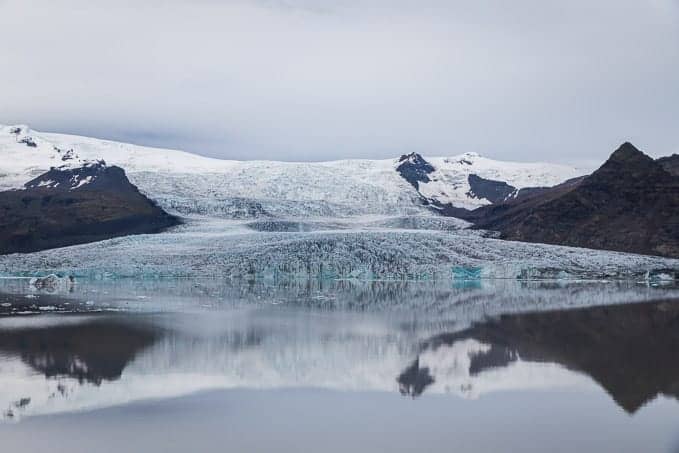 There’s no fences or barriers here, so it’s hiking at your own risk, (photos below). If you were so inclined, you can hike on the trail right up to the base, and touch the left side of the glacier. But you should know glaciers are extremely unpredictable and unstable, especially when the weather is warm. They can break off and avalanche down without warning at any time, so some distance is recommended. 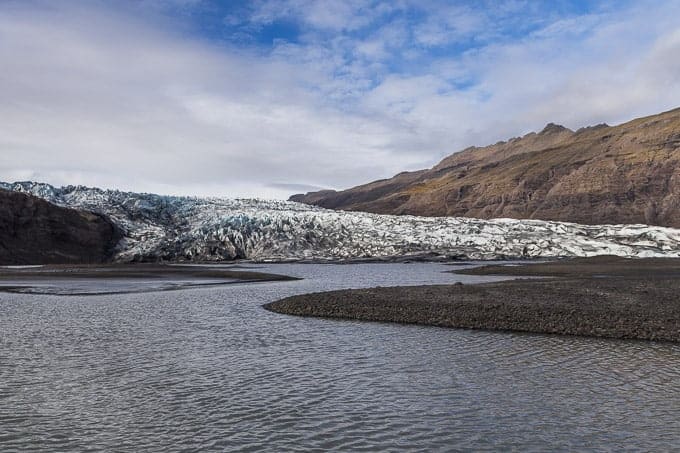 We decided to take the path off the right leading to the viewpoint. From there you can wander down onto the plain before the glacier, and start walking right up to the foot of it. Once again, this is where things can get dangerous. We stopped way away from the glacier, and got the drone out to fly closer for a better view. You also have to watch for quick sand at the foot of glaciers, so stay on the obvious path, and don’t wander. 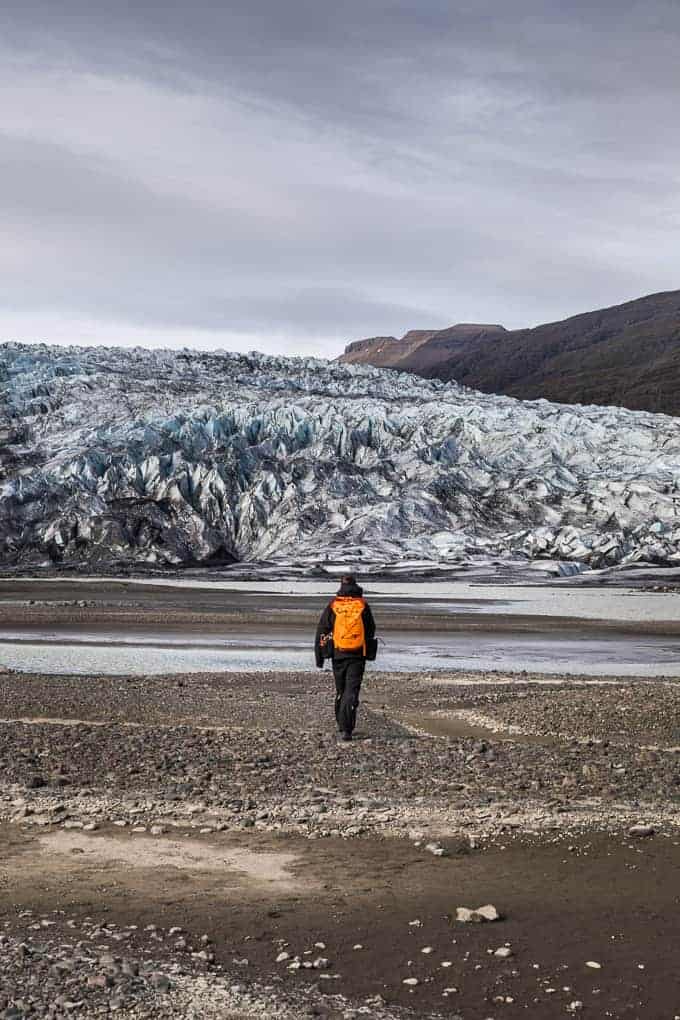 So far it had been mostly cloudy, but it looked like it might just clear up in time for sunset. And we decided to hike out and head to the Stokksnes area where the famous Vestrahorn mountains are located. This turned out to be a great idea as you’ll see in Day 8 Part 2.

2 thoughts on “Day 8 in Iceland Diamond Beach and Jokulsarlon”