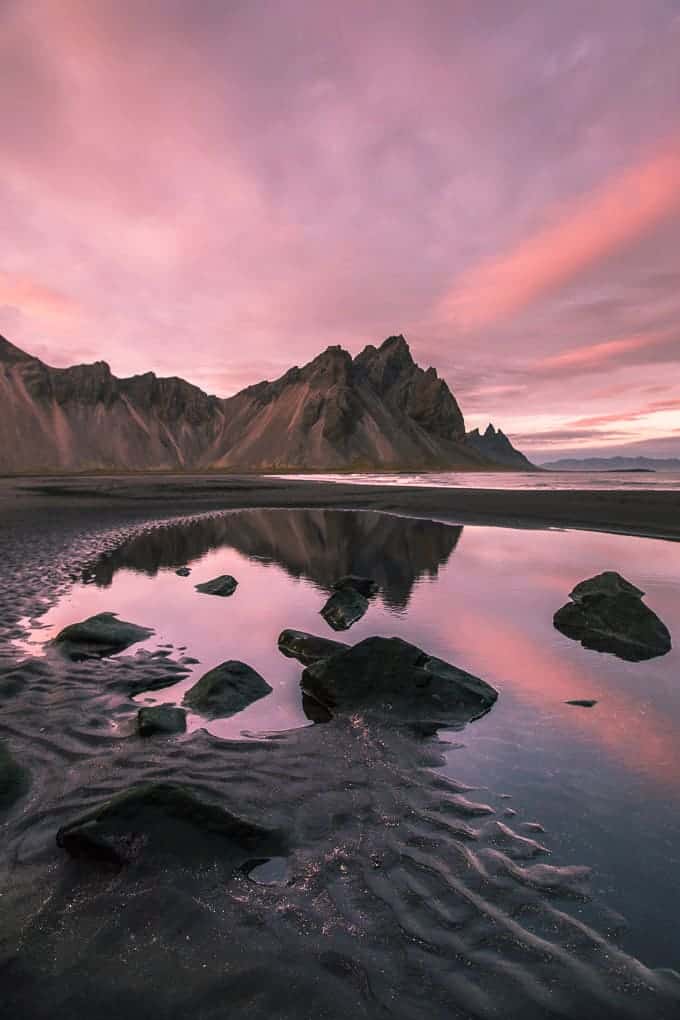 When we left off in the first part of Day 8, we were headed towards the famous Vestrahorn mountains to try and catch a sunset, (pictured above). We arrived in the late afternoon flat out exhausted from a lack of food, coffee, and sleep. Never the less, when in Iceland… you just go and go, and go some more because everywhere you turn is something else amazing to see!

The turn for the Vestrahorns can be easy to miss, so using Google maps would be super helpful if you can. This whole area is also private property, and there’s now an admittance fee of $8 when we were there. But it does give you access to both the beautiful mountain views, and the viking village as well. 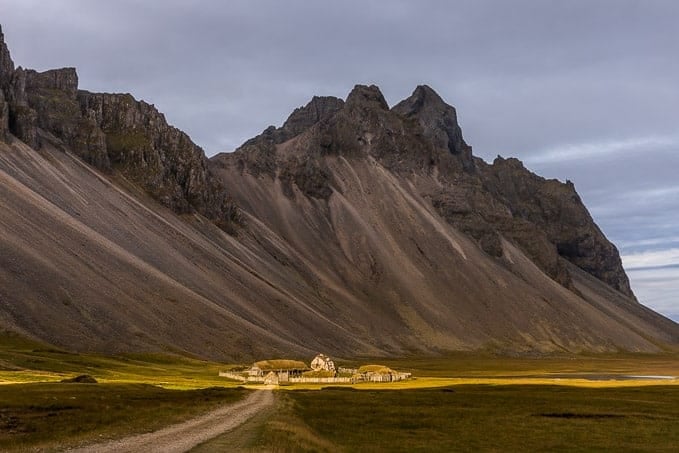 The viking village was fun to see, and it’s just a short walk down the road. From what we learned, there’s an original viking hut located there where Hollywood came and built and entire village around it for a movie that never ended up getting made. 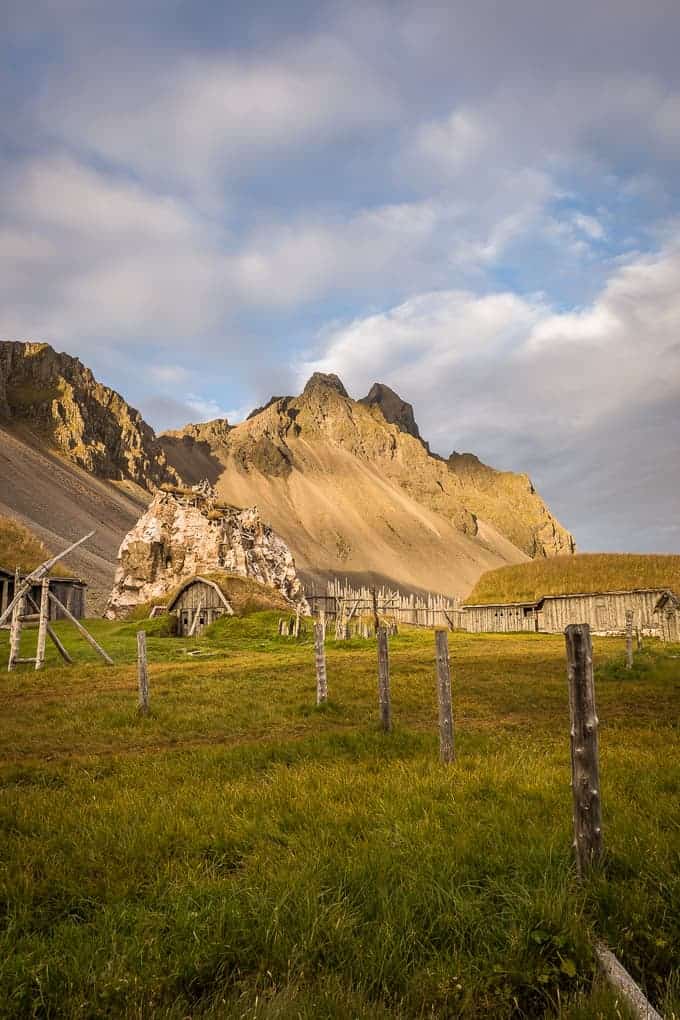 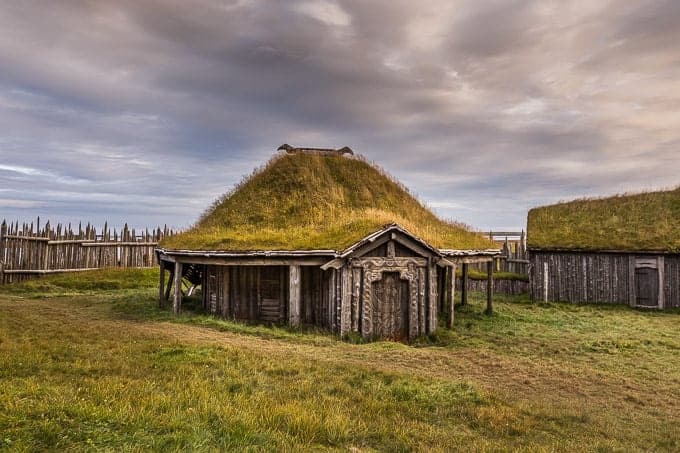 So we wandered around a bit, staying to the paths with wooden planks over the muddy areas to try and preserve the grounds. And then we headed off to our main objective, the sunset! 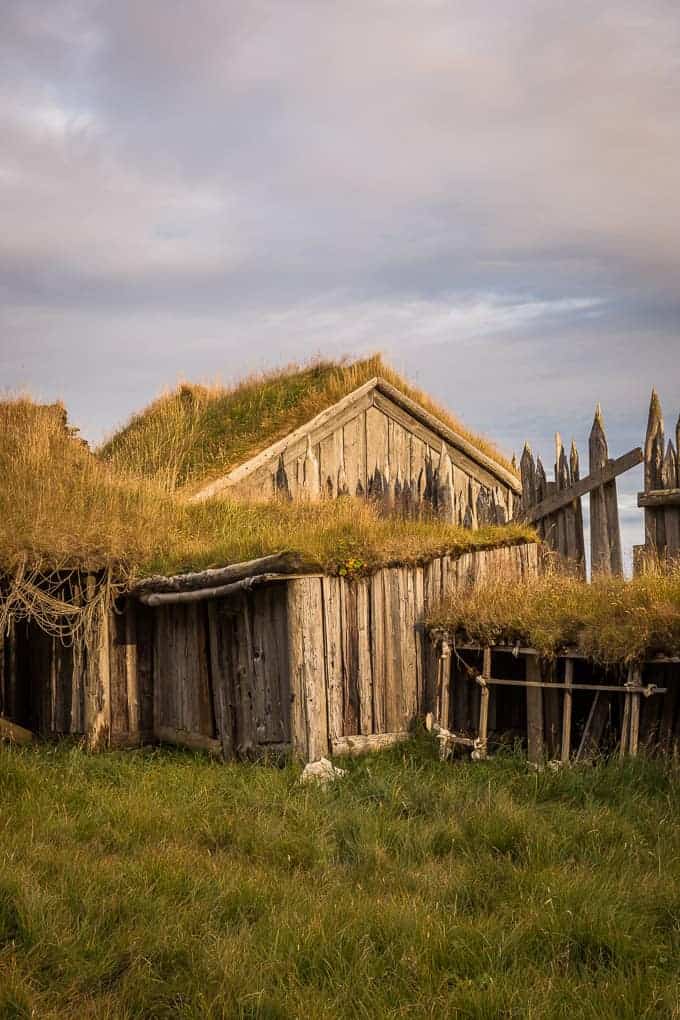 When we arrived at the beach, the clouds were breaking up just enough that we knew we had a chance at a bit of color happening. We pulled out all the gear to do a time lapse, but ended up having some technical difficulties, so I’m not sure we’ll end up with much footage from that endeavor. But it does lead me to a little story which was an all too common experience for us during our trip to Iceland. 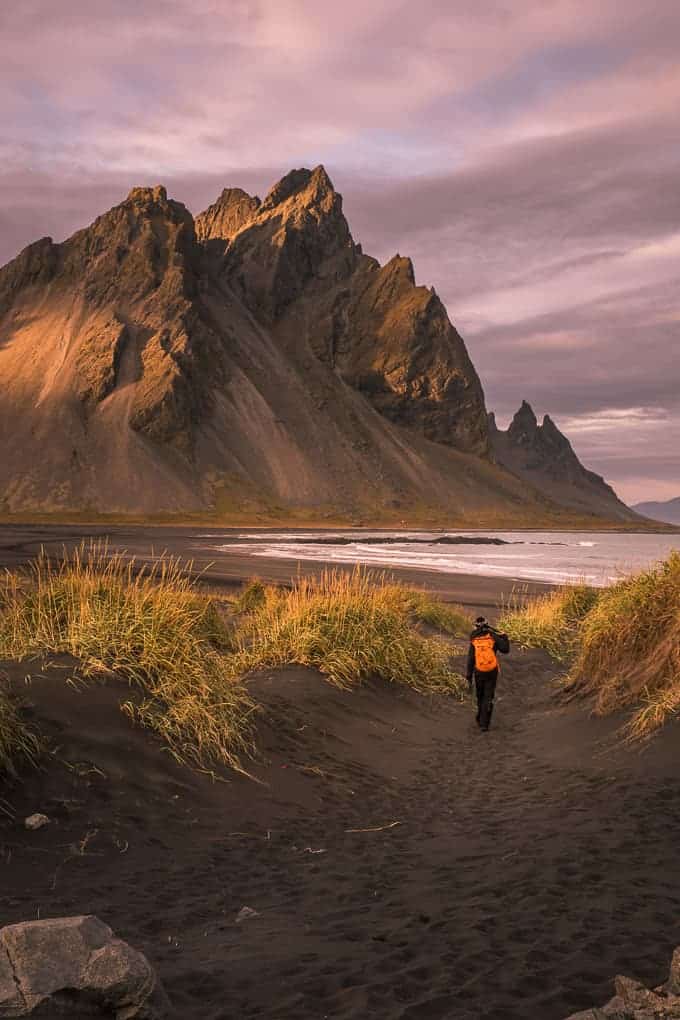 We had taken over an hour to set up all our gear for the time lapse I mentioned above, when a photographer came and set up right behind us. Then he actually had the audacity to start yelling at us to ‘get out of his shot’!?! I mean.. what in the world? We’d been there for quite some time before he showed up, and he could see all of our gear laid out – why on earth was he yelling at us. Not to mention there was the entire vast beach to take photos on.

We both just ignored him, and kept on with what we were doing, figuring he could move to get the shot. But it really left a bad taste in my mouth because I can never figure out why we can’t all just ‘get the shot’ together. Time and time again you see people jumping in front of other people to get a photo, and this happened all too often on our trip. My general confusion still comes from the fact he set up right behind us, then yelled at us to move? 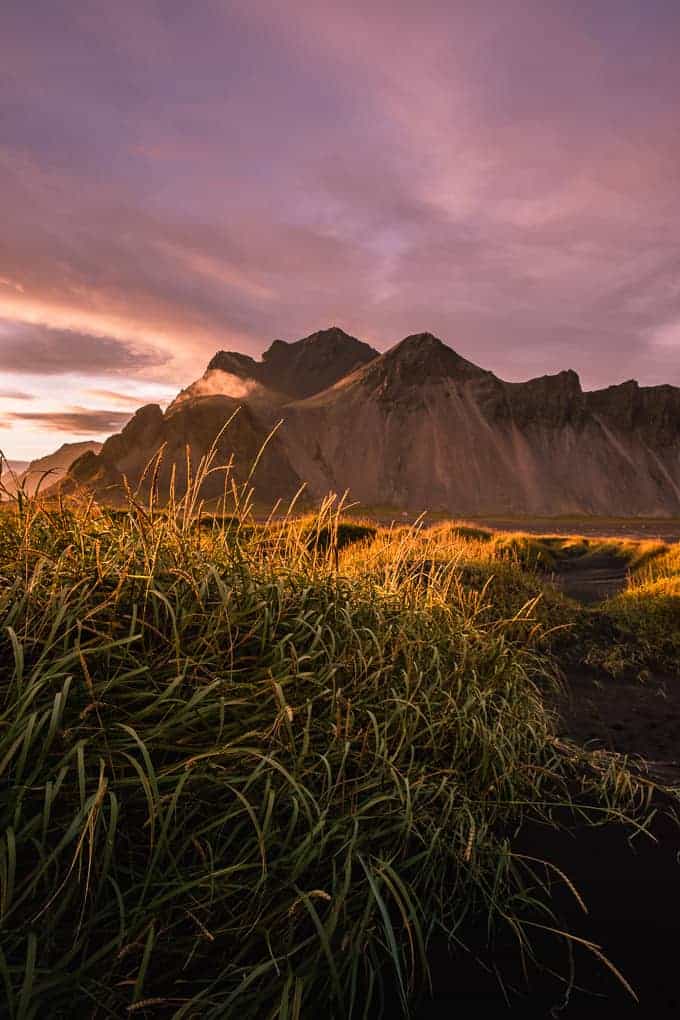 But in any case, we still had a wonderful sunset, which was worth staying for even with the bad company that had moved in behind us! After the color started dying down, the clouds began to completely cover the sky, and we thought we’d be in the clear to make dinner, and go to bed early.

So we drove back to the parking lot where you pay your entrance free to make dinner. We had gotten our stove fuel tank refilled on the way out to the Vestrahorns, so we were back in the business of cooking again. Of course I made pasta, because it’s super easy to make on the road. 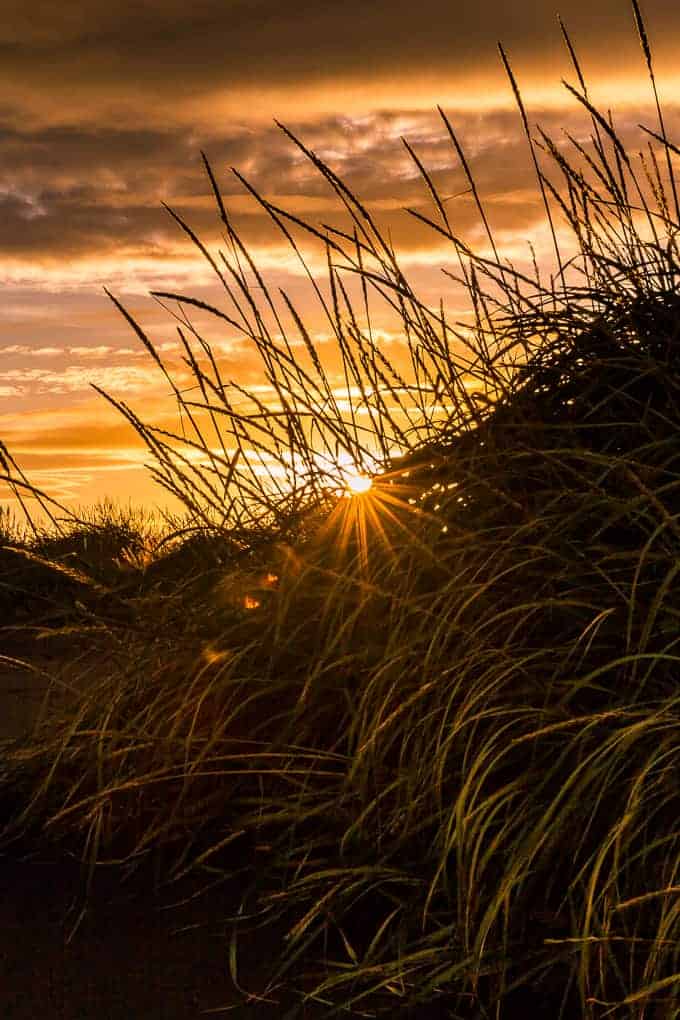 This time I made a veggie packed spaghetti with zucchini, bell peppers, and local ground beef. Then I added a can of pre-made spaghetti sauce, cooked penne pasta, and some local Icelandic yogurt in for creaminess, (and calories). We were both extremely hungry to say the least after going 2 days with just powder bars and a piece of cheese, so we were both eager to dive into a home cooked meal.

But just as I was adding the pasta to the sauce… we both noticed a greenish glow starting up in the sky. So once again, we packed up the stove, set the finished pasta at my feet in the van, and drove back up the road to see if the clouds would clear for the aurora to come out. 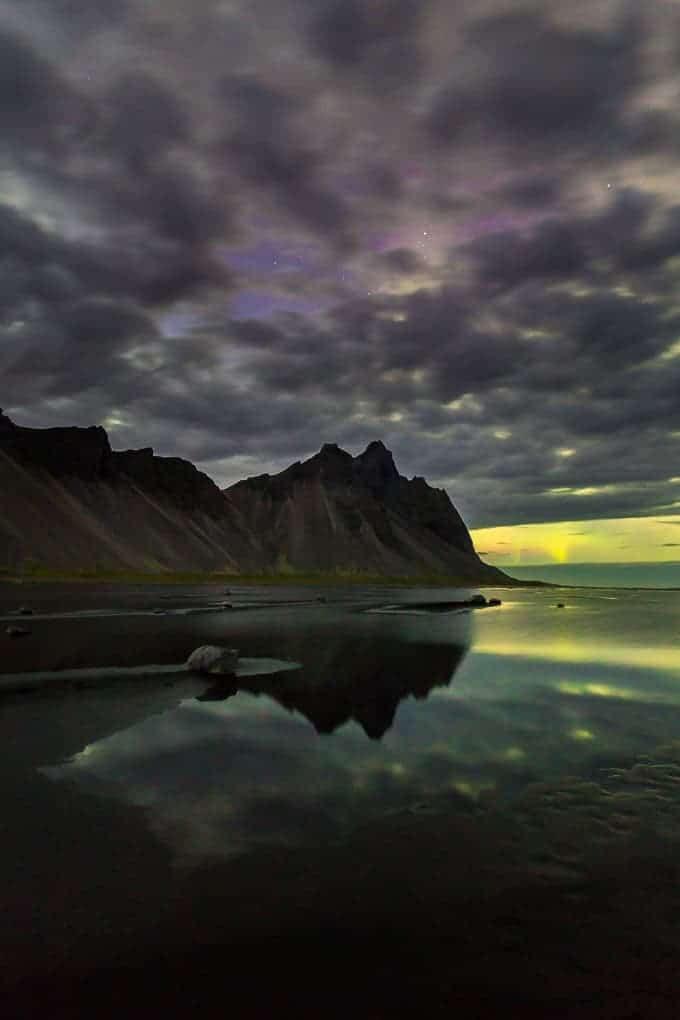 We took photos for a while, but the clouds just wouldn’t clear quite enough to see much of the aurora. So we hopped back in the van to finally eat our dinner, which was growing cold by this point. After we had our first good meal in days, we headed back out and took a few more photos, but the clouds just weren’t breaking. 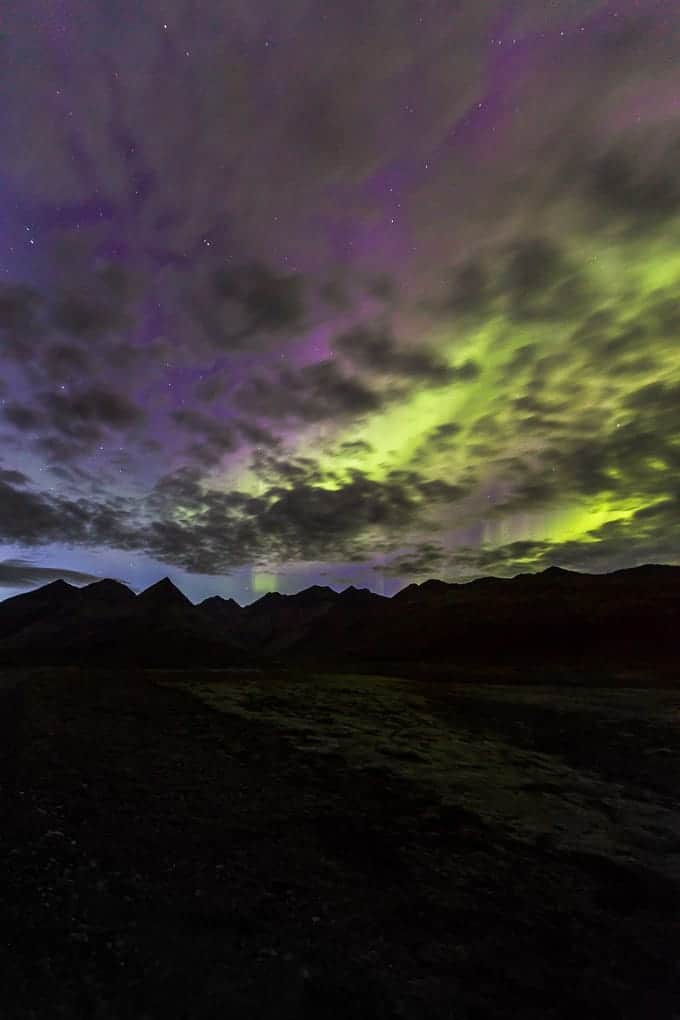 So we got back on the road, and kept heading on our route around Iceland. Not too far up the road though the clouds cleared a bit more, and we stopped to take the above photo. However the clouds never did leave, and since we were so far past exhaustion we couldn’t even think anymore, we decided to finally call it a day in the wee hours of Day 9.