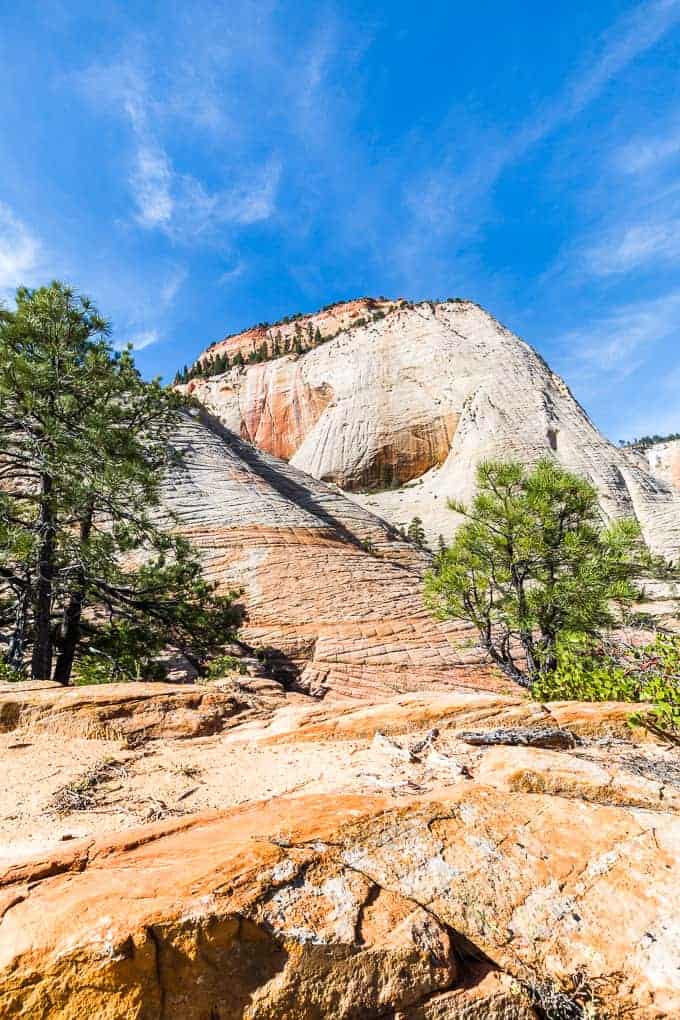 The West Rim Trail in Zion National Park shares a section called Walter’s Wiggles (a steep set of switchbacks – see 2 photos below) with the famous Angels Landing. A lot of people do this 15-16 mile hike as a backpacking trip, but since we were short on time, we decided to just hike what we could of the trail.

To do the whole trail, you’ll need to arrange for shuttle services because the main trailhead starts in Virgin, UT, and you will be dropped off at Lava Point. But the popular way to hike this trail is from the Grotto up, which also shares the trail with Angels Landing, (and since that trail is wildly popular there will be crowds). Once you pass the the spot where everyone turns off for Angels Landing, the crowds disappear, and you keep gaining elevation until you reach the high point where the views are spectacular! 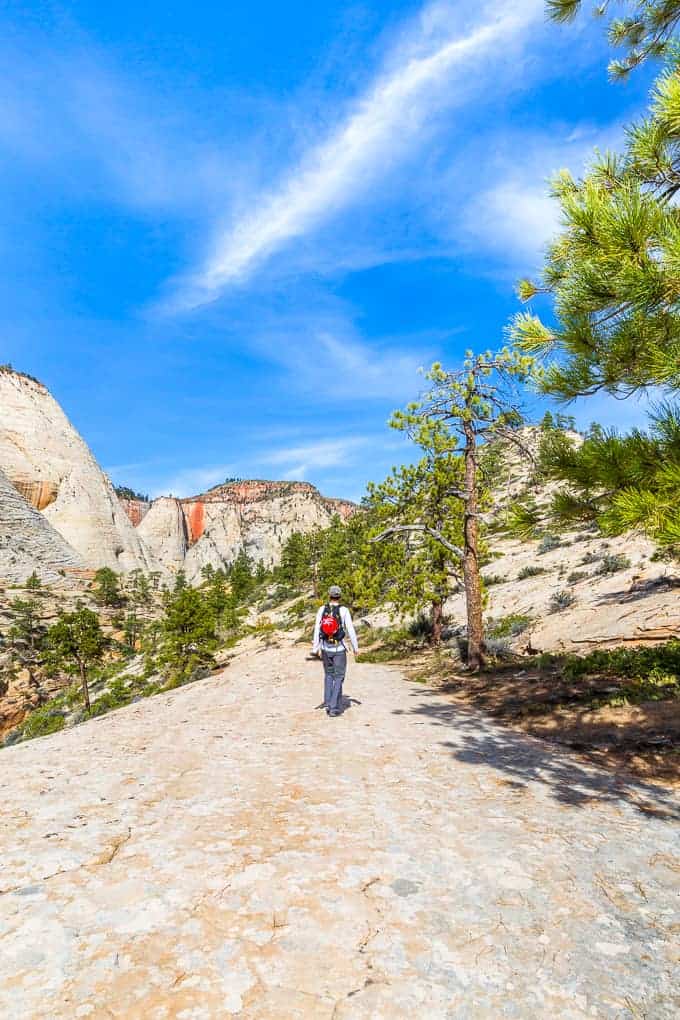 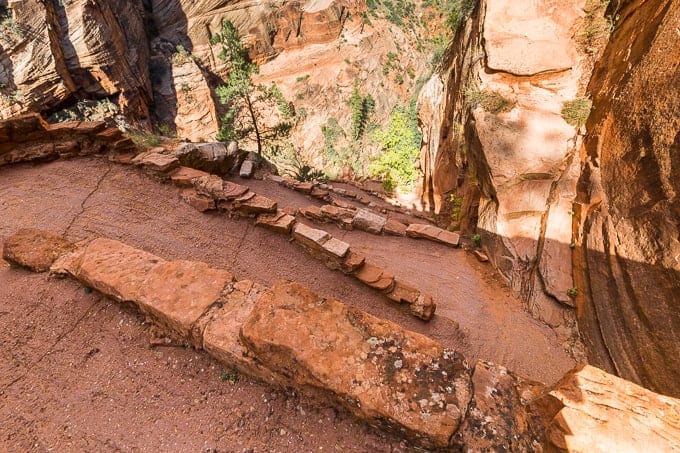 (This is the Walter’s Wiggles section I mentioned, and trust me, you don’t want to be coming up that in the heat of the day!) 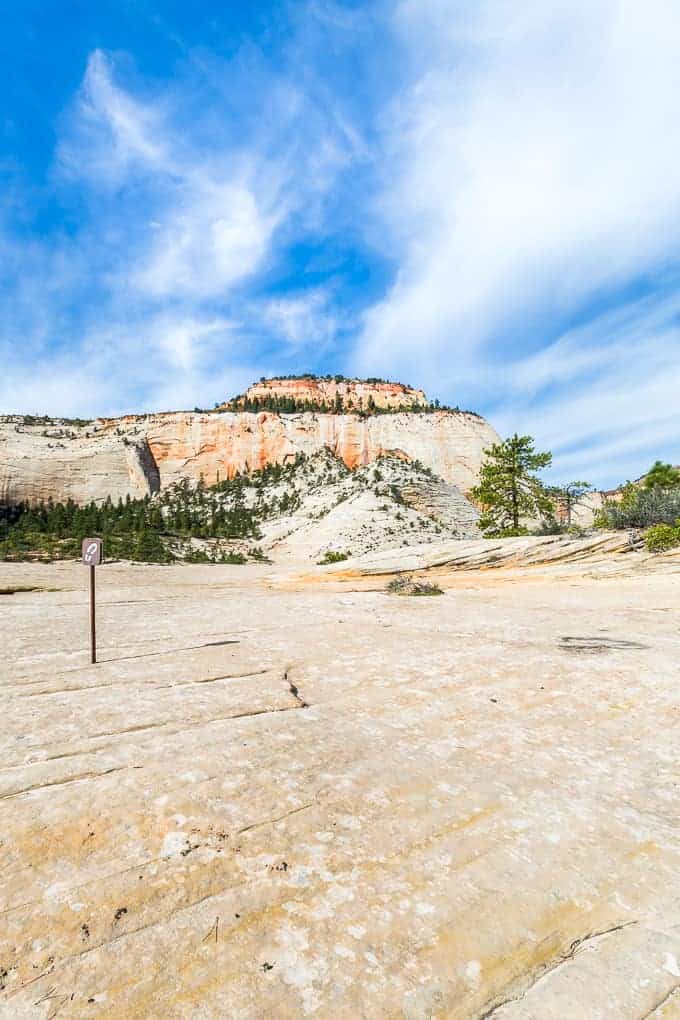 Once you reach the high point, the trail suddenly disappears into large slabs of rock, but just look for the signs that will keep you hiking in the right direction until the trail becomes obvious again. 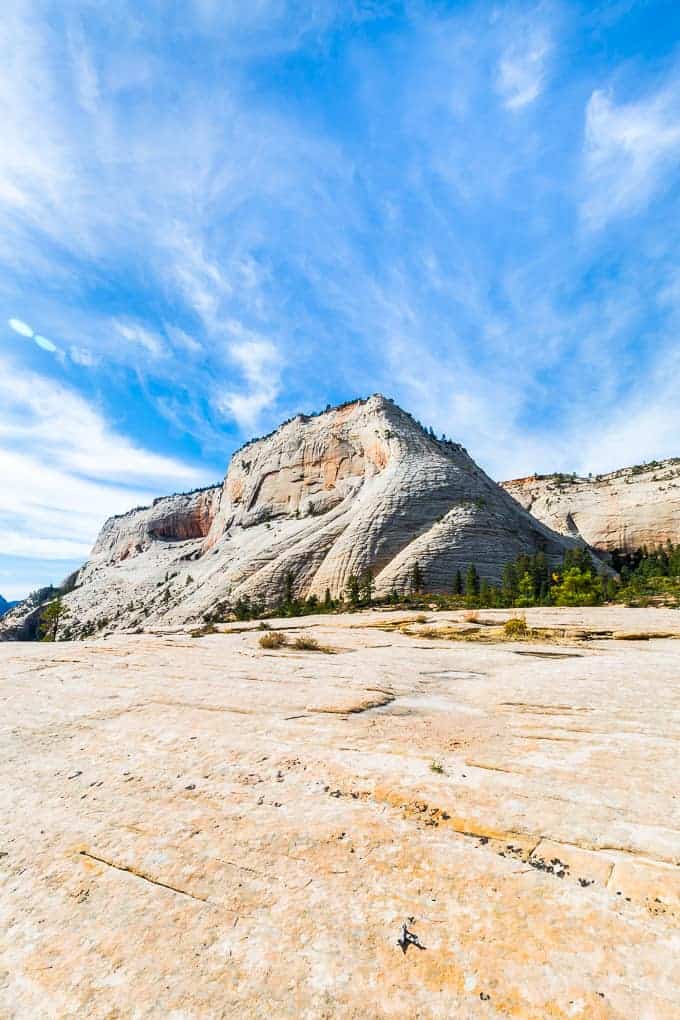 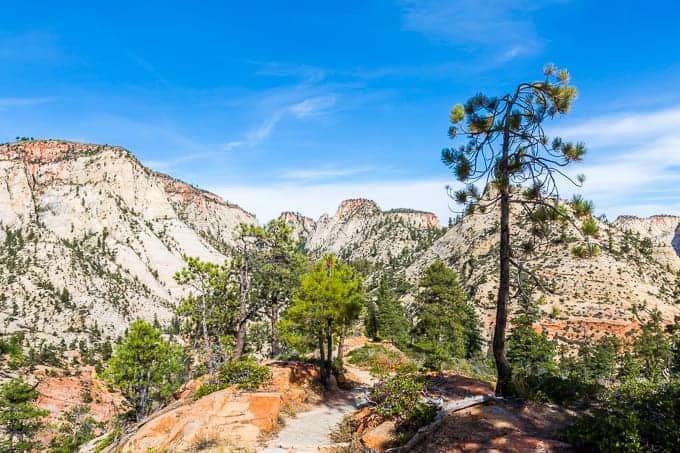 From that high point, the trail starts to descend and the views become even more varied. Simply hike as far as you’d like before turning around and heading back. With so many of the hikes in Zion being super crowded, (even in the off season) the West Rim was a nice change of pace. Not only are the views fantastic, but we barely saw anyone after leaving Angles Landing behind. 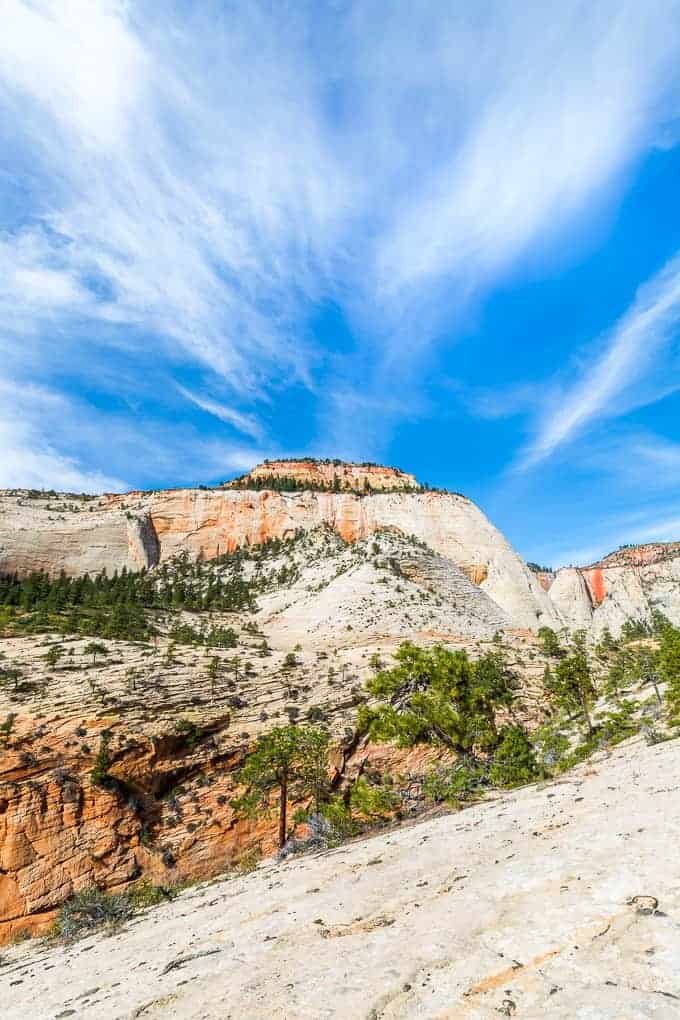 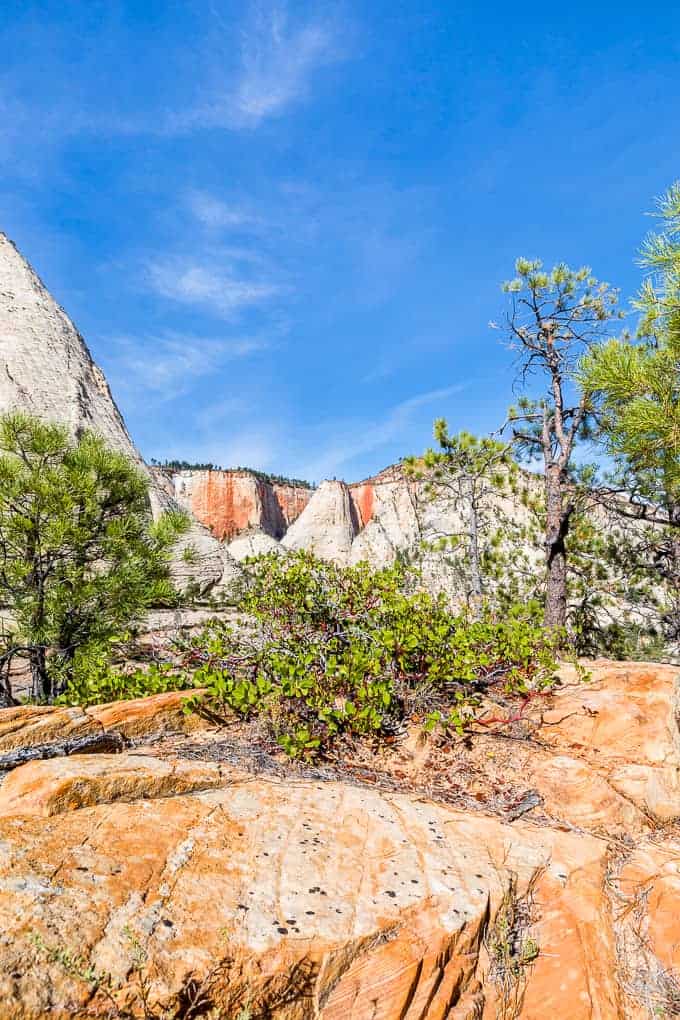 If you’re a strong hiker and don’t mind getting up before the crack of dawn, I would recommend doing both Angels Landing and as much of the West Rim trail as you’d like. Most of the hard work for either hike is the switchbacks of Walter’s Wiggles, so it’s nice to be able to get 2 hikes for the price of 1 shot upwards. There is still a fair bit of elevation for both Angels Landing and West Rim even after you leave the switchbacks, so I wouldn’t attempt both in 1 day unless you’re used to gaining a lot of elevation (at least 2,000 feet), and hiking 10-15 miles at a time. 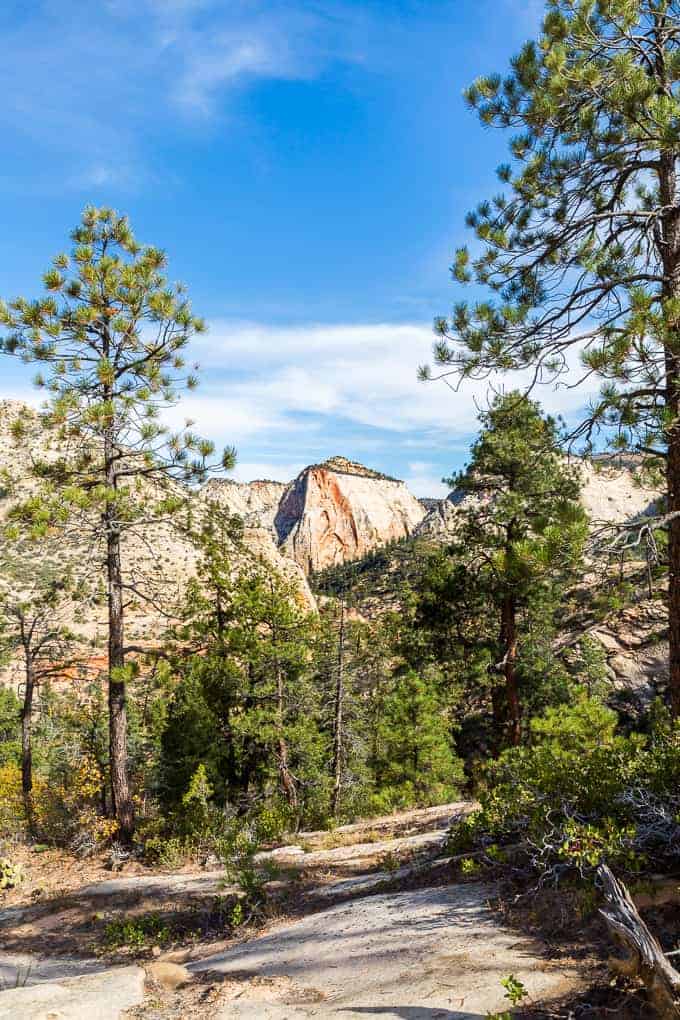 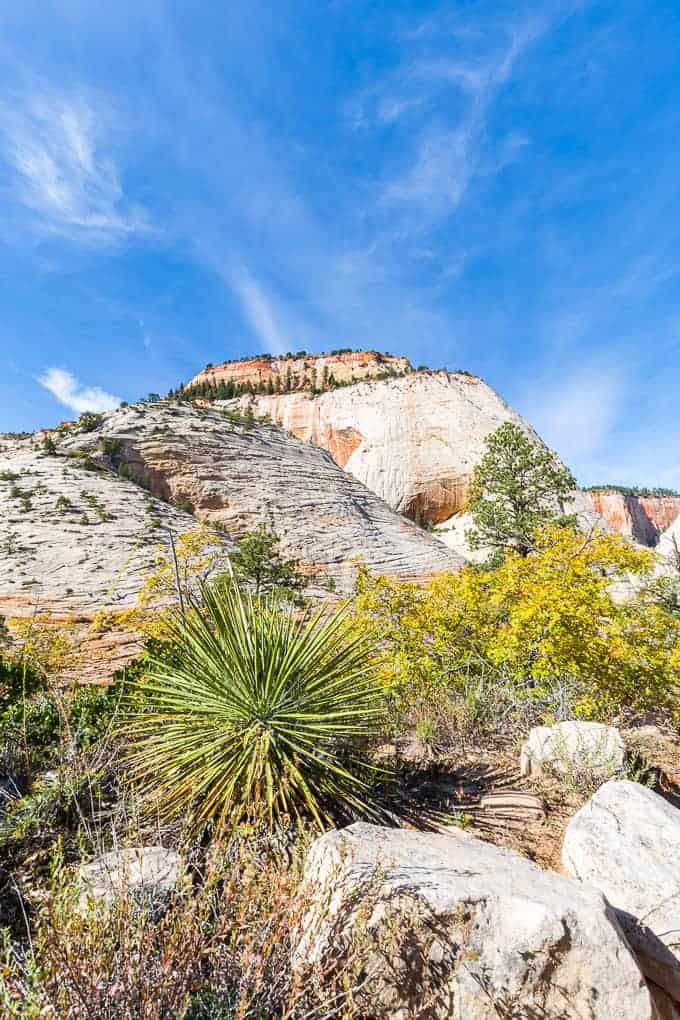 This hike is also a fantastic alternative to Angels Landing if you have a fear of heights because you’ll get some great views without any crazy heart pounding drop-offs! If you’re limited on time, I would recommend Observation Point over the West Rim because I think there’s more views along the way, and a much more interesting trail with the gorgeous canyon you go through.

But that’s not to say the West Rim isn’t worthwhile, it just doesn’t rate as my 1st or 2nd choice. We spent 6 days in Zion and the West Rim was one of my favorites, especially because it was so quiet you could really take in the views without being jostled or pushed around. This trail often gets overlooked for the more popular well known trails, but if you have a few days in Zion, this would be a great trail to put on the list!