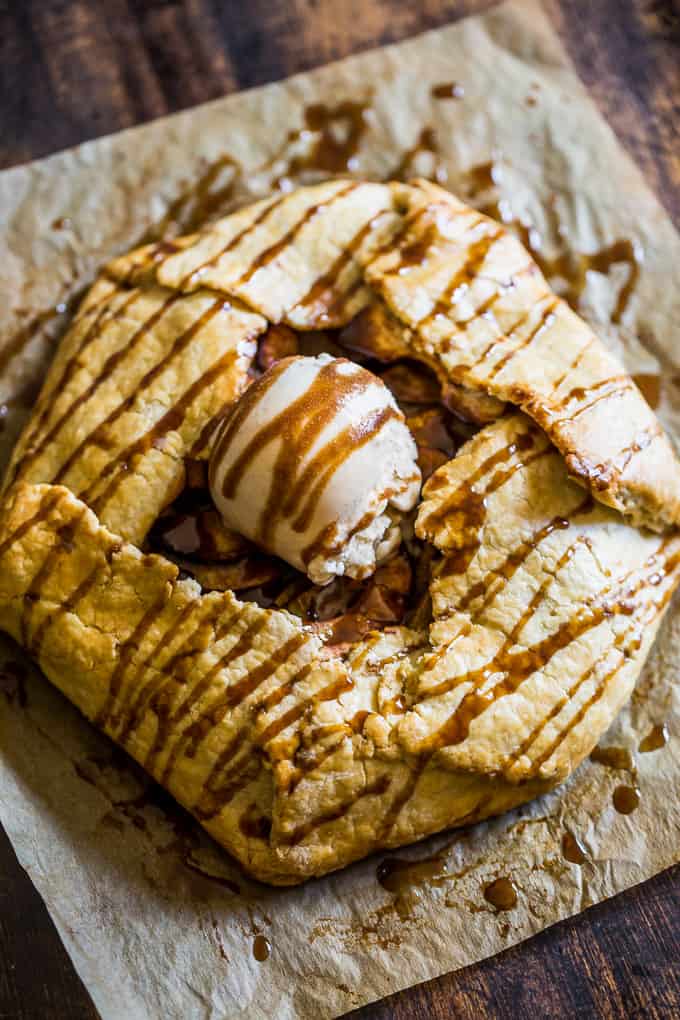 Tyler’s favorite dessert is apple pie, or pretty much anything apple cinnamon related. So over the years, I’ve developed lots of recipes with that combo in mind from this Apple Crisp with a Twist to my Cinnamon Crunch Apple Pie Smoothie Bowls.

But unfortunately like we were talking about last week with my Chicken Pot Pie Pasta recipe, gluten free pie crusts can be really problematic. They tend to get gummy with too much moisture. So that pretty much means that every single pie you’d want to make might have a gummy bottom crust – which is so unappealing.

Even when you’re working with regular wheat flour, you have to be careful of that dreaded soggy bottom crust. But you know what always works out beautifully – galettes!?!

It might have taken me awhile to make the connection, but the answer to my gluten free pie crust problem, is to simply make a galette. I’m not sure of the science behind it or anything, but maybe it’s because they don’t have as deep of a filling and cook quicker that they don’t get soggy or gummy. 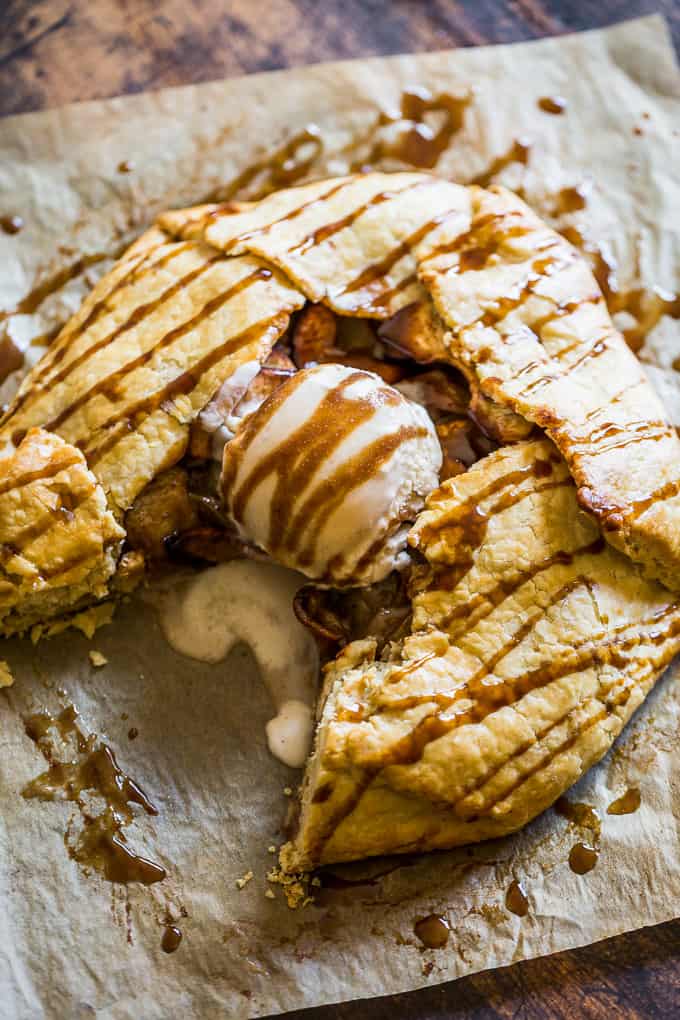 I don’t think this would work very well for chicken pot pie since the filling is too thin to hold up in galette form. But it works perfectly for any kind of fruit you’d like to turn into a rustic pie.

A galette is basically and 1.5 crust pie that looks quite rustic. There’s no top and bottom, just one bigger bottom crust where you pile up the filling in the middle. Then the sides are folded up, leaving a bit in the middle showing.

Since this is a gluten free crust, you’re going to have some cracking as you fold it up. But there’s no need to worry about imperfections when making a galette. And there’s always the beautiful caramel drizzle to hide any flaws as well! 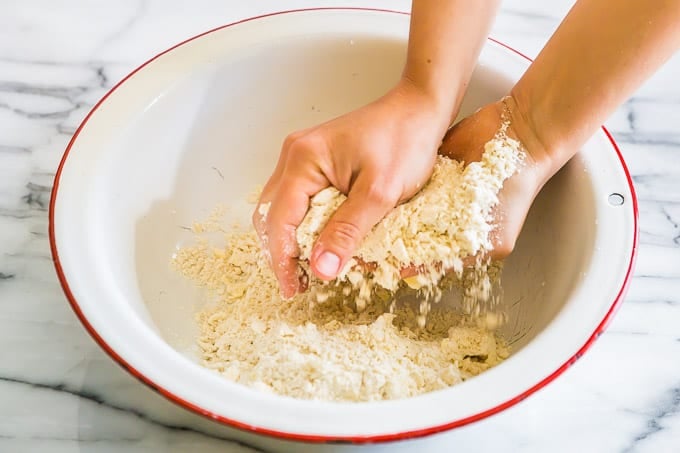 The pie crust recipe here is one I developed when I was still baking with wheat, so I know that it works whether you use gluten free or regular all purpose flour.

I always work the butter into the flour by hand to avoid over working it. You’ll want to see some obvious pieces of butter, (about the size of a pea) still remaining before you add the water. 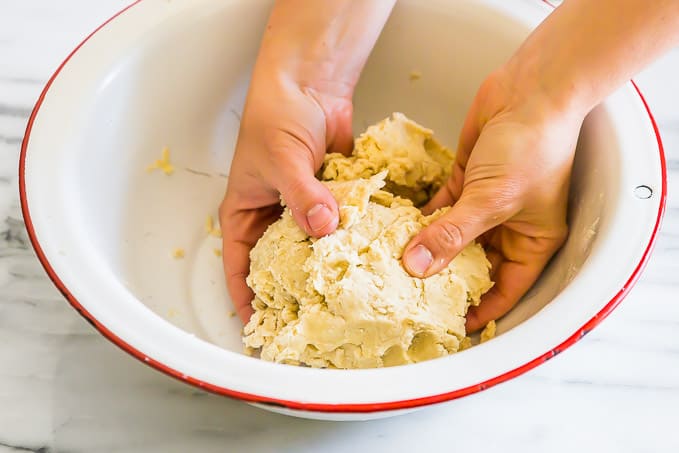 Next you add just enough water to form a dough. If you’re using regular all purpose flour, this is where you want to be very careful not to overwork it because it activates the gluten causing a tough crust. And it’s always best to cover and refrigerate it for 30 minutes or so to let the gluten rest.

If you’re making this gluten free like me, there’s no need to worry about overdoing it! 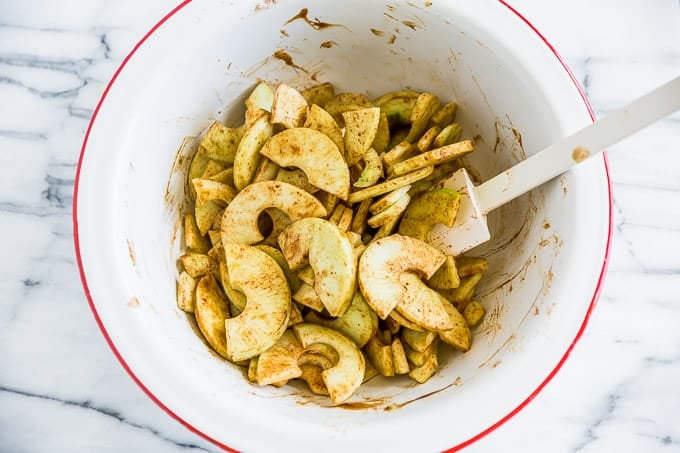 While the pie dough refrigerates, make the apple filling and set it aside. 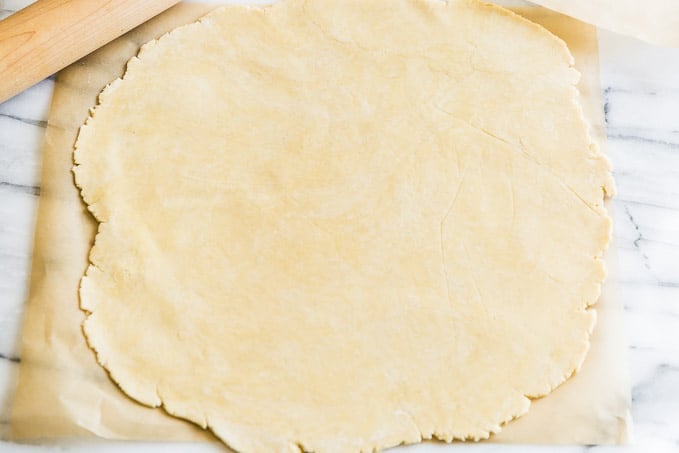 Then roll the crust out to about 1/8″ thickness in an approximate circle. Next pile the apple filling into the middle of the dough, leaving 4-5″ of space around the edges. 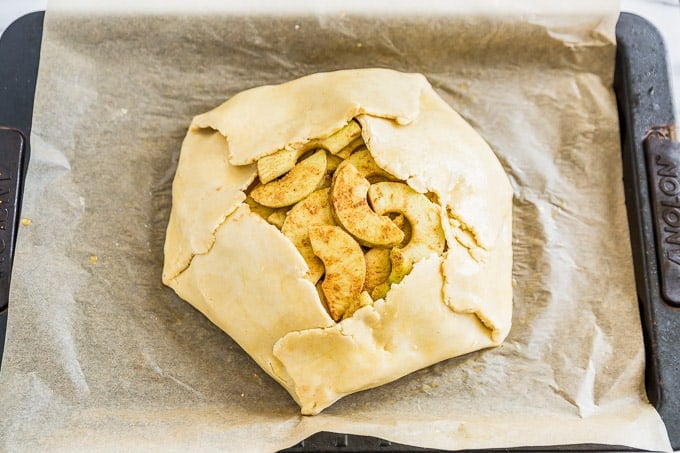 Finally fold up the sides around the apple filling, being as careful as you can not to break the dough. Don’t worry too much when cracks appear, it’s bound to happen. Then brush the dough lightly with an egg wash, and bake until it’s golden brown and bubbling. 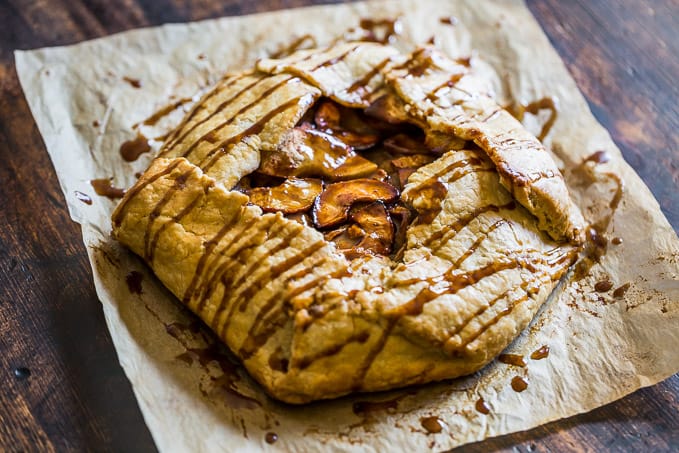 Once the galette comes out of the oven it’s ready to be drizzled with caramel sauce. Or you can wait for it to cool before drizzling it. Either way you choose to serve it, the crust is really best on the first day. 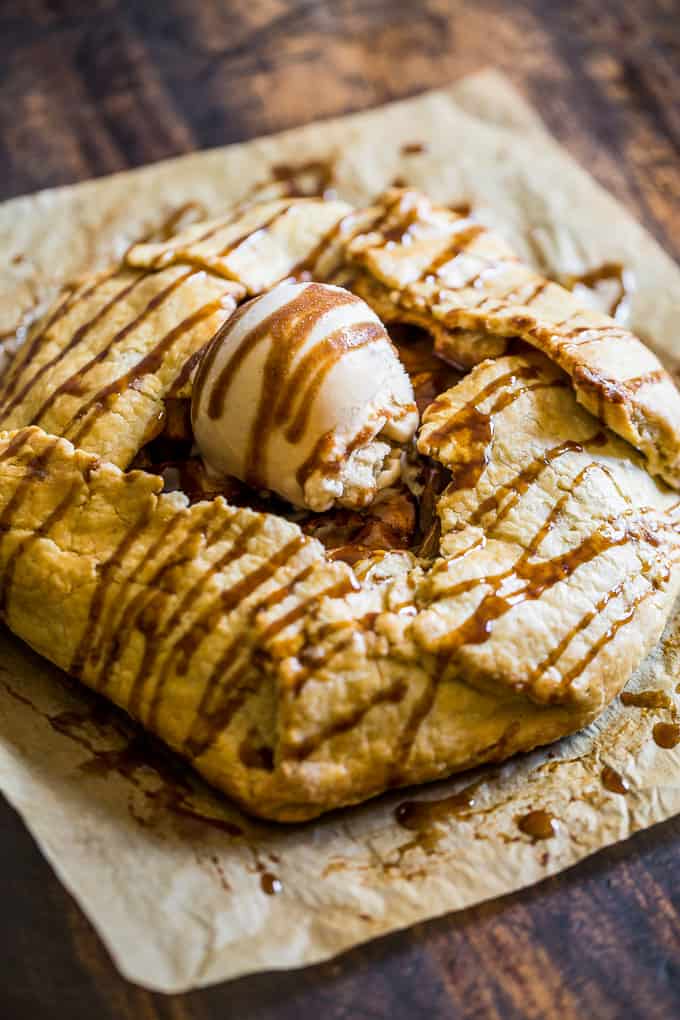 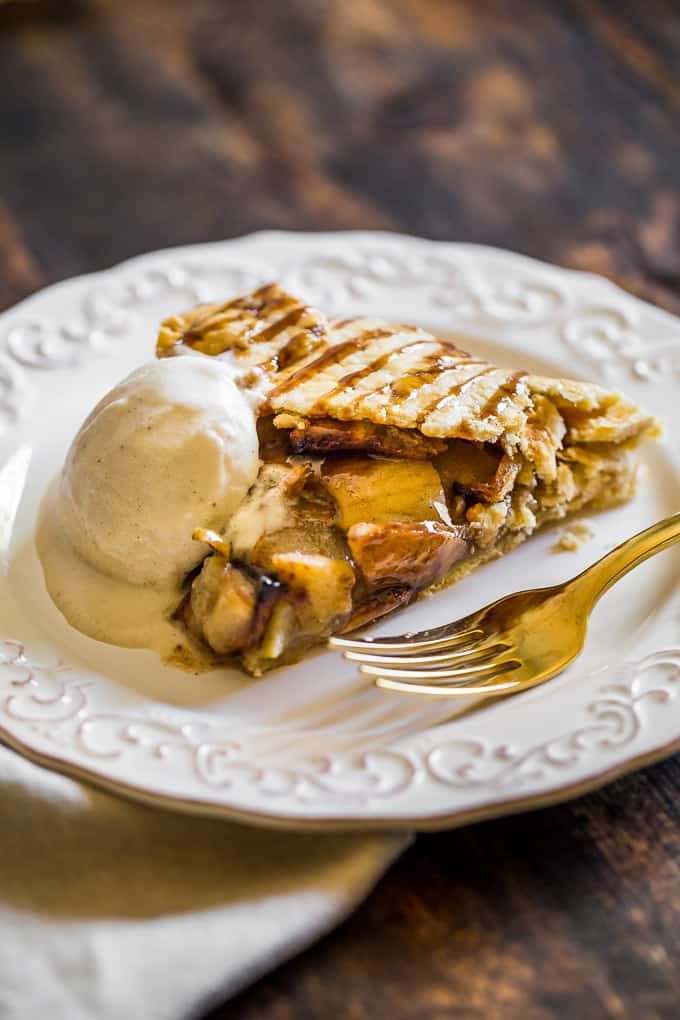 And of course every apple pie needs ice cream, so I’ll leave you with my 3 favorite options!

I use the Namaste gluten free flour which I’ve found to work really well compared to everything else I’ve tried. You can also substitute regular all purpose flour in a 1:1 ratio for this recipe.
I used Granny Smith apples for this particular test run, but I’ve also used and loved McIntosh and Sweet Sixteen apples for both apple pies and crisps.
The amount of caramel sauce called for in the recipe is for a tart apple galette, which is perfect once more caramel sauce is drizzled on top, and you add ice cream. But be sure and taste an apple slice before baking it. If it’s too tart for your taste, add a bit more caramel. You can also substitute coconut sugar or cane sugar for the caramel sauce, but you might need a bit more.