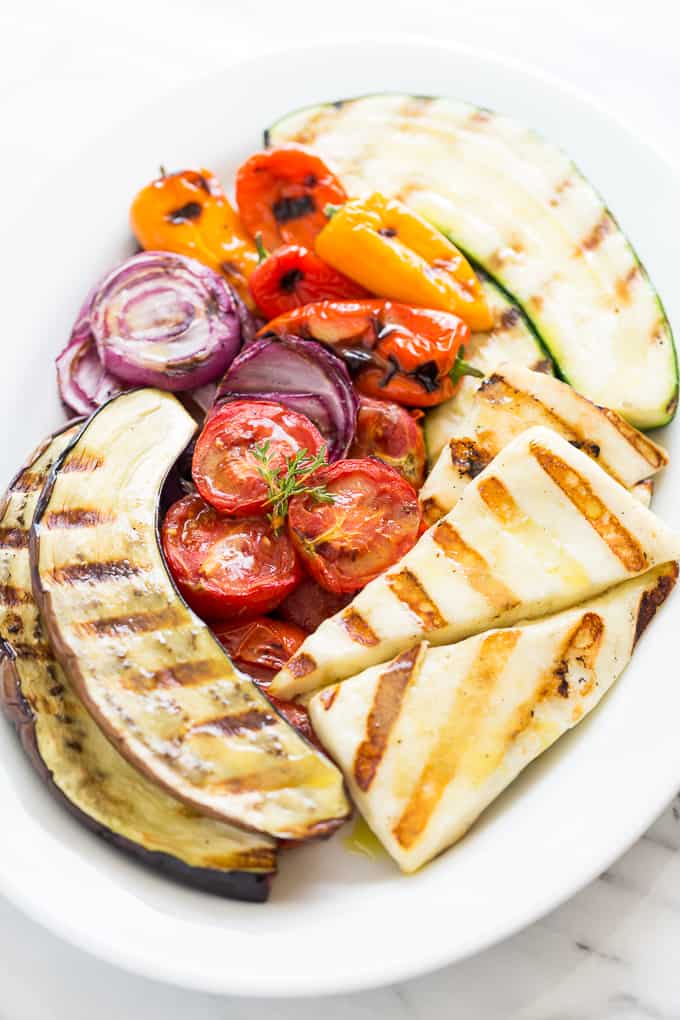 It all started with a package of halloumi cheese, there it was sitting on the shelf at the grocery store just begging to be taken home. So of course I bought it and started mulling over what on earth I was going to do with it.

I often end up with all sorts of impulse buys in my fridge. I’ve heard people struggle with impulse buys while shopping for clothing, but for me it’s always been food. I’m instantly intrigued by something I see, and before you know it, I’ve hopped through the checkout line and then I have to figure out what to do with it! But unlike clothes shopping, I’ve never regretted any of my food impulse buys.

The only thing I knew about halloumi cheese is that it can be fried or grilled without completely melting like regular cheese, oh… and that it’s Greek, so… that seemed like an obvious place to start. I really have no idea whether or not this dish is even remotely Greek, but it’s inspired by local in season produce, and the flavors I’ve experienced in traditional Greek food. 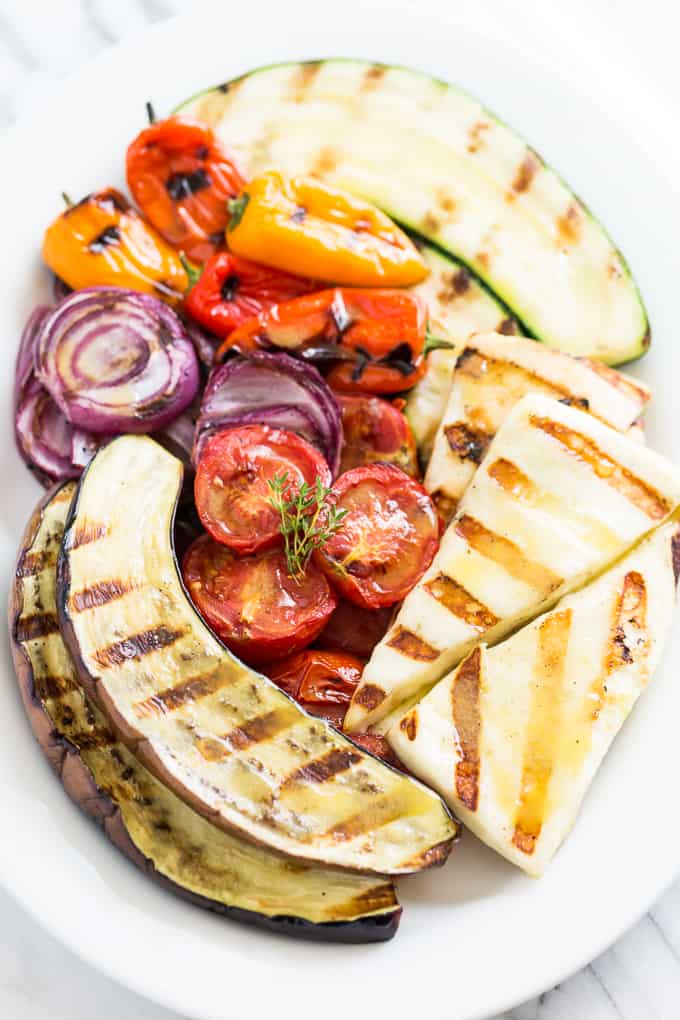 So often grilling seems to revolve around copious amounts of meat, but veggies and now cheese are some of my favorite things to grill. I can’t think of a vegetable that isn’t made so much better by a little time on the grill. 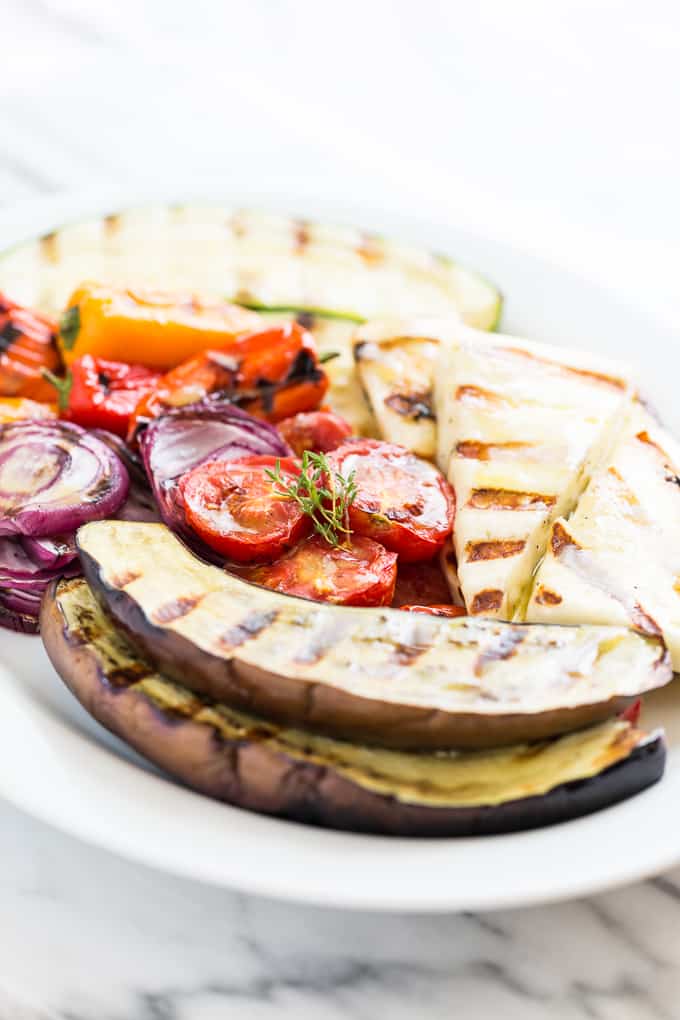 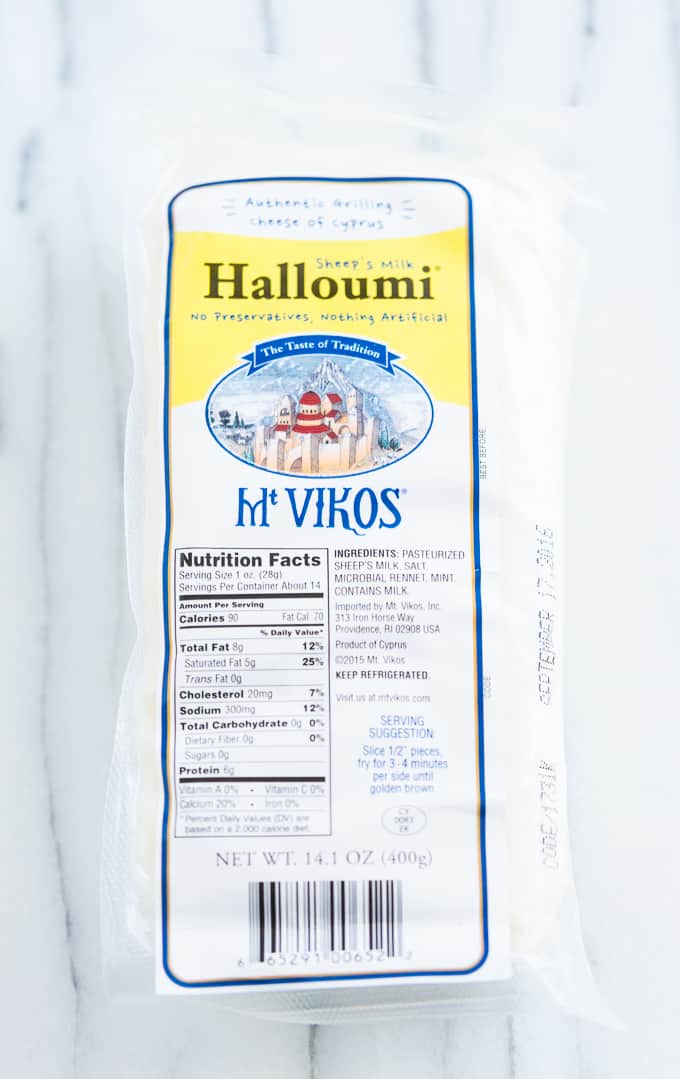 My halloumi cheese came in a 1″ thick rectangle. I cut it into 2 triangles like you would for a sandwich, then standing both triangles up with the long flat side down cut them in half widthwise to create 4 – 1/2″ thick triangles. No matter what shape your cheese comes in, you’re aiming for 1/2″ thick pieces to grill. 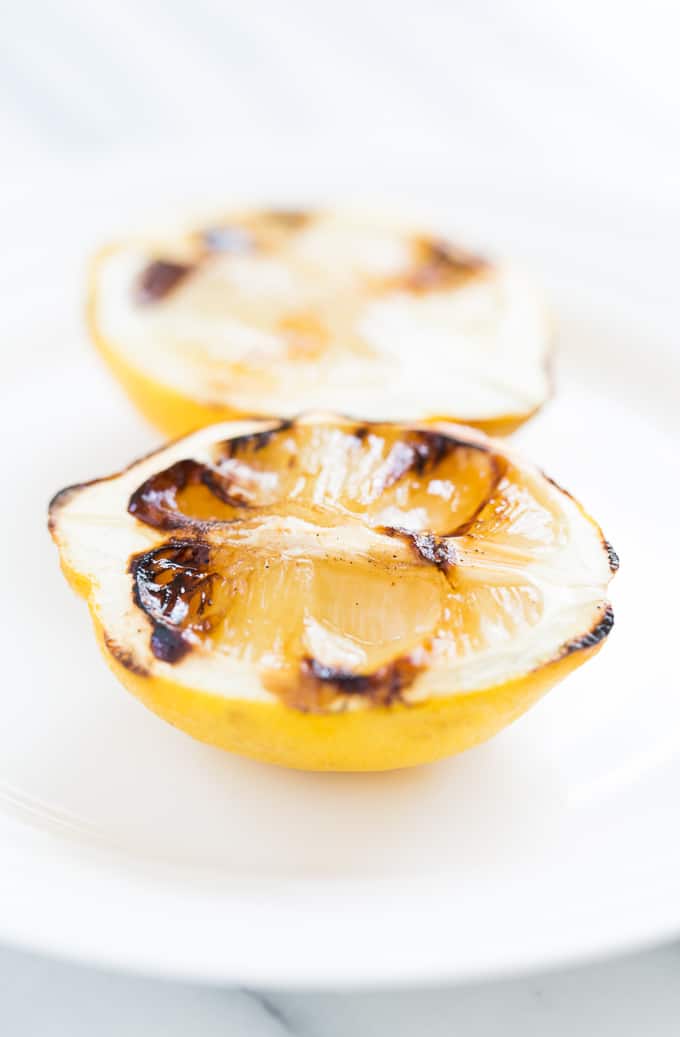 Can we take a moment to discuss grilled lemon, great… because it’s magical! I got the idea from the restaurant Mercato in Calgary where the chef always had lemons grilling to accompany several dishes on the menu. I came home and recreated their Tuscan Steak with grilled lemon wedges, and I’ve been grilling lemon ever since.

When you grill a lemon, it takes the edge off the acidity and creates a caramelized flavor that’s wonderful in dressings or simply squeezed over anything else you might grill.

For this recipe, I start with the lemon wedges and a clove of garlic on the grill. Once they’re done they have a bit of time to cool while the grill platter cooks. While the veggies cook, you make a dressing with the grilled lemon and garlic. 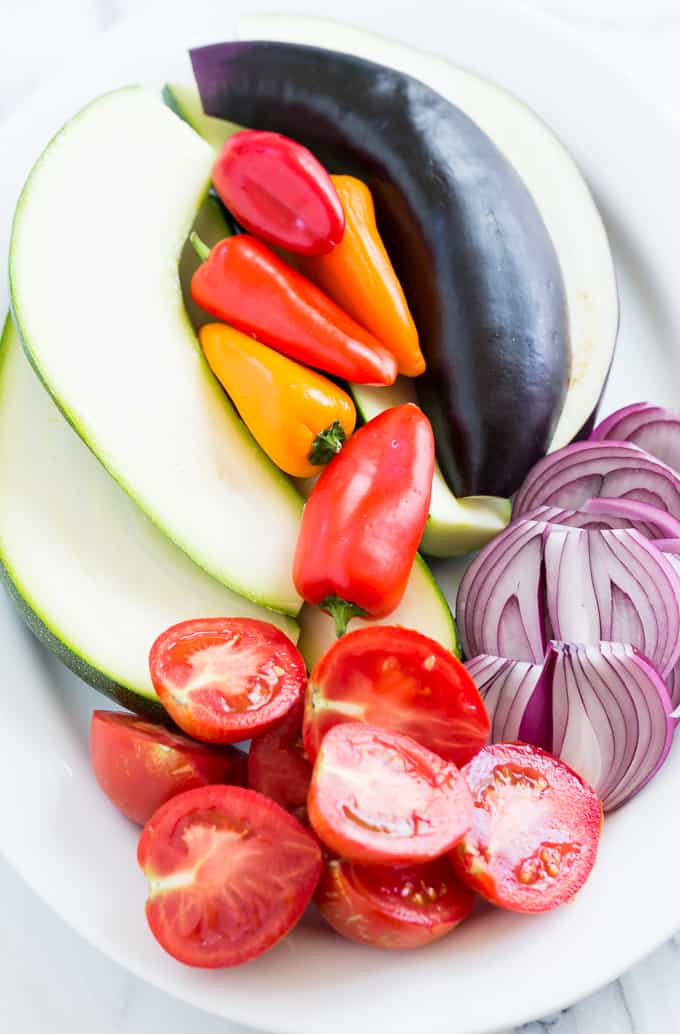 The prep for this grill platter is pretty minimal, simply slice the bigger veggies in half and the onion into quarters, then you’re ready to go. 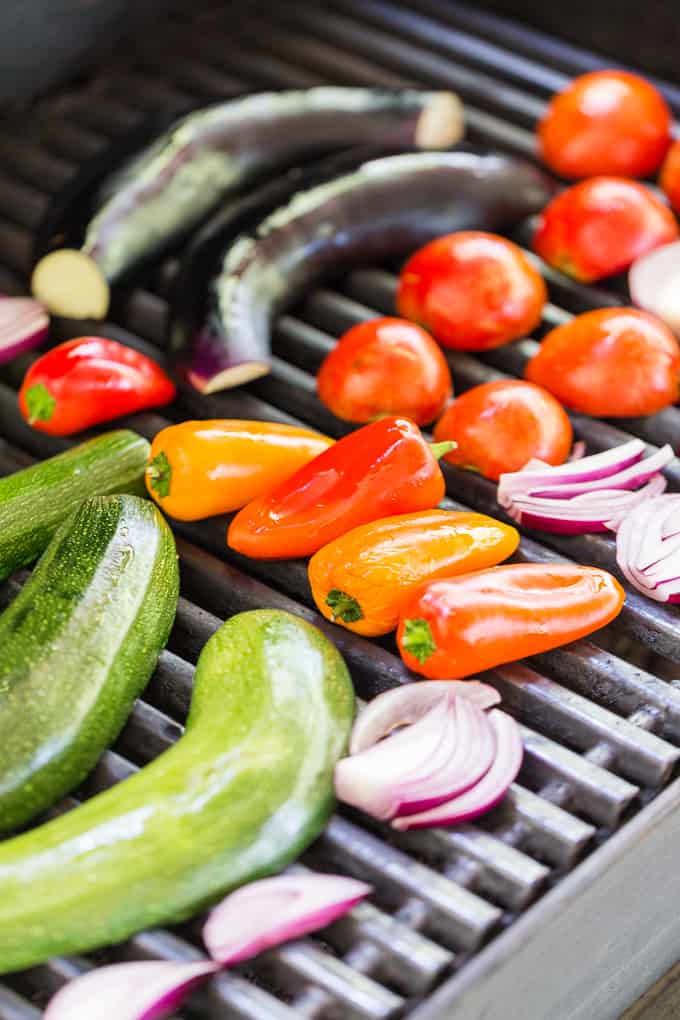 Depending on how large your veggies are, you might want to put the cheese on halfway through because it only take 6-8 minutes to cook where the veggies usually take 15 or so. 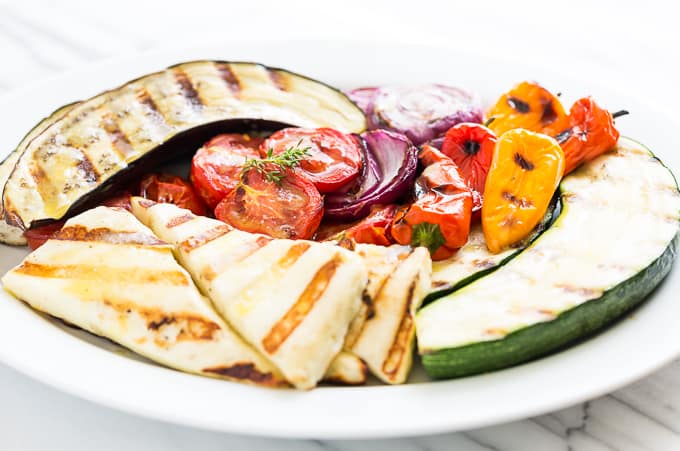 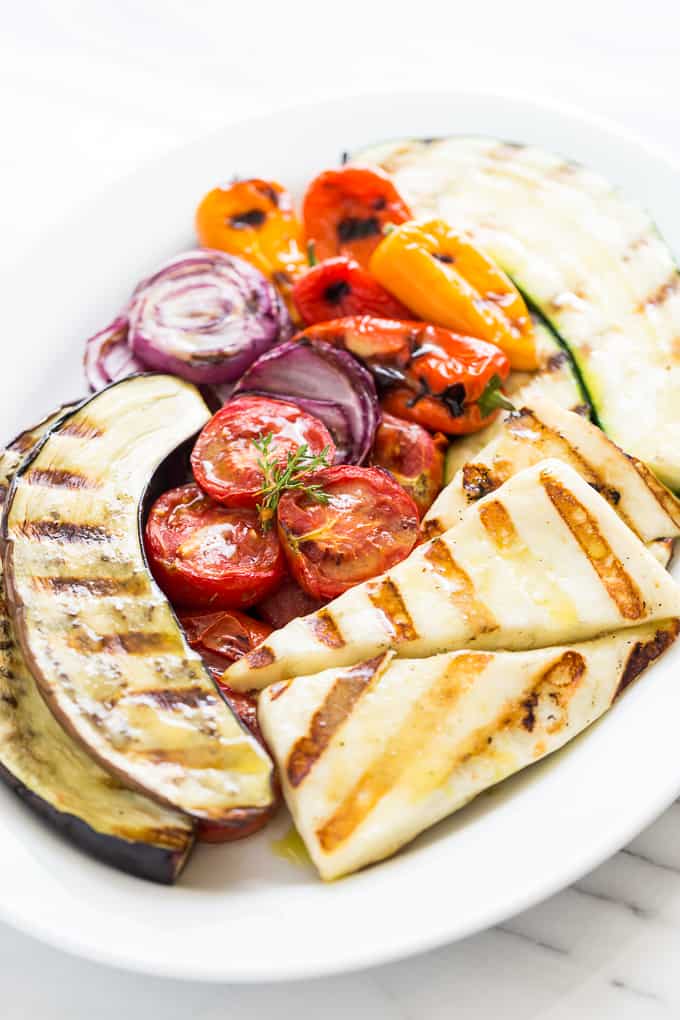 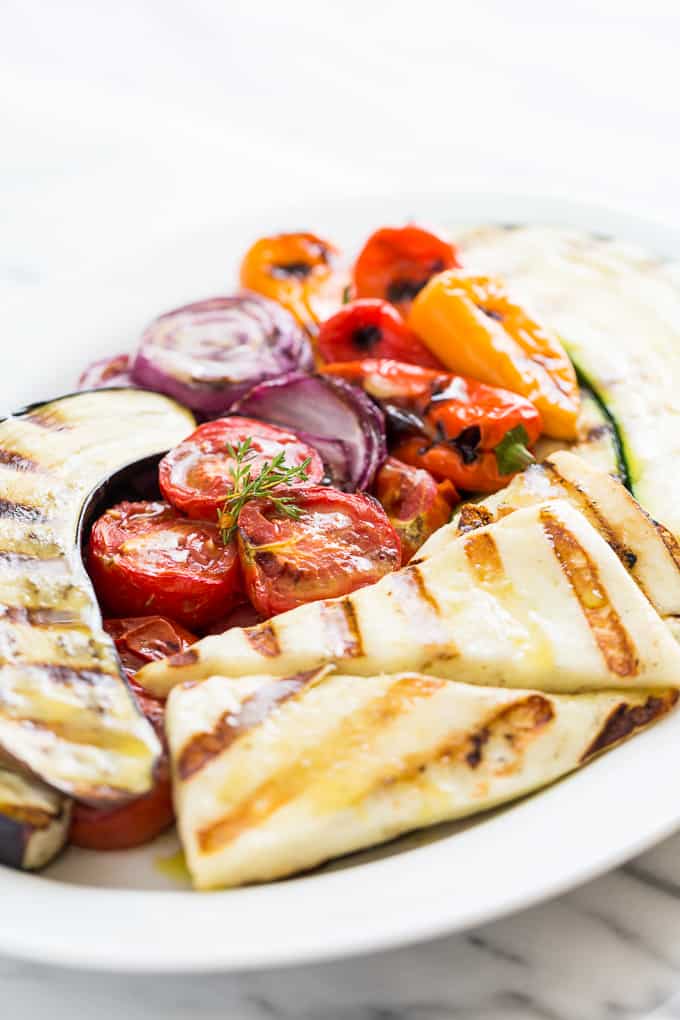 Once everything is grilled, you just arrange it on a platter and drizzle with the lemon garlic dressing. I tried the dressing with both oregano and thyme and they’re both delicious, so feel free to pick your favorite. I’m going to try rosemary next because I really have a thing for rosemary, I just thought it was high time I branched out and used something else for a change!