This ultimate Homemade Whipped Cream recipe is perfect for all your favorite desserts. Whipped cream is simple to make at home in under 5 minutes. It’s the perfect dessert toppings for everything from chocolate cake, to cream pies, and weekend waffles. Try it over your morning coffee, hot chocolate or chai latte. Whichever way you choose to serve this homemade whipped cream, it will add so much to any sweet treat.

Whipped cream is so easy to make, there’s no need to ever buy whipped topping! It comes together in just minutes and is the perfect way to top your favorite desserts and cozy drinks.

This whipped cream has 2 ingredients that make it extra special, or the ‘ultimate’ whipped cream if you will. First up is just a touch of salt. This is crucial to balance out the flavor of whipped cream so don’t skip it!

The second ingredient is adding a bit of creme fraiche. This adds incredible dimension to regular homemade whipped cream, so be sure to check out that variation below.

I got this idea from an article I read a while back about how Nancy Silverton, (of the famous La Brea Bakery) adds creme fraiche to her whipped cream. So I decided to try it out, and I’ve never looked back.

How to make this recipe step by step

Step 1: Start by adding cold heavy whipping cream to an electric mixer or large bowl and whip on medium-high speed until the cream is starting to take some shape. You want to whip the cream until soft peaks form. This means if you scoop the cream up it will create a peak that will fall back down and not hold much shape.

You can use a stand mixer with the whisk attachment, electric hand mixer with beaters, or a whisk and large bowl and beat the cream by hand.

Tip: Chill your mixing bowl for the best most consistent results. Whipping cream whips into the best whipped cream when it’s cold. However I usually don’t bother with this extra step and just work quickly. Once you take the heavy cream out of the fridge you want to give it your full attention until it’s whipped, about 3-4 minutes.

Step 2: Next sift the powdered sugar over the top, and add the vanilla as well as the sea salt. Scrape down the sides of the bowl if necessary. Whip again just until combined for a loose whipped cream or a touch longer for ‘stiff peaks’ where it will hold it’s shape.

Step 3: Serve immediately with your favorite dessert, or refrigerate and use within 4-5 hours for the best texture. And that’s it, so simple to make and so much better than the store-bought stuff!

Ways to serve this

How long does it take to whip cream?

About 3-4 minutes with an electric mixer, about 6-10 minutes whipping it by hand with a whisk.

What is the difference between heavy cream and whipping cream?

They are the same thing and there shouldn’t be any difference, heavy cream and whipping cream should have at least 36% milk fat to qualify. The brand I buy is labeled as 40% milk fat and whips up beautifully into silky smooth whipped cream. If you’re unsure what to buy in the store start by looking for at least 36% milk fat. Anything less than that isn’t going to turn into whipped cream, or at the very least it won’t work well! Milk and half and half will not whip into whipped cream because they do not contain enough fat.

What happens to cream if you over whip it?

At first it will become grainy, then it will start to clump and if you over beat it long enough it will turn into butter with the liquid left behind. Whipped cream comes together in just a few minutes, so you want to give it your full attention.

Where does heavy cream come from?

Heavy cream is naturally occurring in cows milk and will naturally rise to the top as it sits to be skimmed off. Sheep’s milk and goat’s milk contains very little cream and is naturally emulsified in the milk, so that’s why you don’t see it in the store.

I really hope you enjoy this ultimate Whipped Cream recipe! If you do get a chance to make this recipe, I’d love to hear from you in the comments. 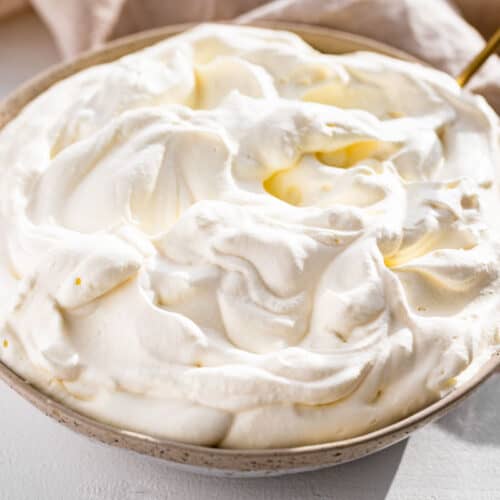 This post was originally published in 2015, but has been updated in 2022 with new photos, new information and tips.